Might-have-beens: They fill our sport the way mayflies fill the spring air. Think of the rider who could not quite join an early break that stayed away to the finish. Or a sprint where an opening along the barriers appeared and just as quickly closed. Or a corner taken a tick too fast, a descent a bit too recklessly. Or the obligations of a domestique.

Consider René Vietto, King René to his fans, one of the finest French climbers never to win the Tour de France. In the 1934 Tour, when Vietto was 20 years old, he won three stages in the Alps, surging into fourth place overall. Moving into the Pyrenees, Vietto stayed close to his team captain, Antonin Magne, who was dueling for the yellow jersey.

When Magne crashed on a descent, Vietto waited for him and led him back to the front. The next day, Magne crashed again on a descent and broke his front wheel. Ahead of him, Vietto returned for Magne and, as domestiques do, gave him his wheel. Magne sped off as Vietto sat on a stone wall at the side of the road, weeping, for many minutes before a team car arrived. 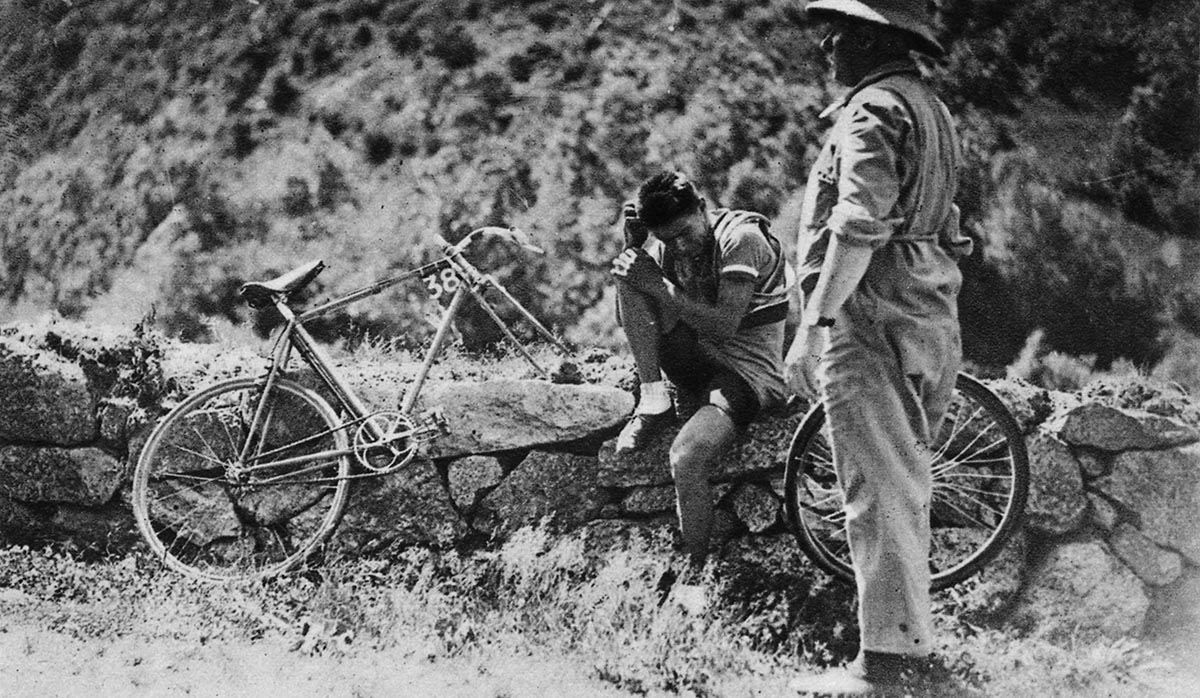 Magne won that Tour a few days later. Although Vietto finished fifth, spectators at the finish in Paris insisted that the two men share the traditional victory lap. The photograph of Vietto in tears cannot be forgotten: Just 20 and mourning the good fortune that nearly came his way once, never to return.

Missed chances, blown opportunities, lost advantages, call them what you will.

Think of  Eugène Christophe, whose story was a staple for decades. It dates to 1913, when Christophe, then in second place in the Tour, broke the front fork of his bicycle on a descent from the Tourmalet.

Following the rule that he had to repair the damage himself, Christophe picked up his bike and walked 14 kilometres to the nearest village, Ste. Marie de Campan, where he found a blacksmith’s shop and began to forge the needed piece. His work went on for four hours while the officials who were overseeing it began to fidget with hunger. “Have I eaten?” Christophe roared. 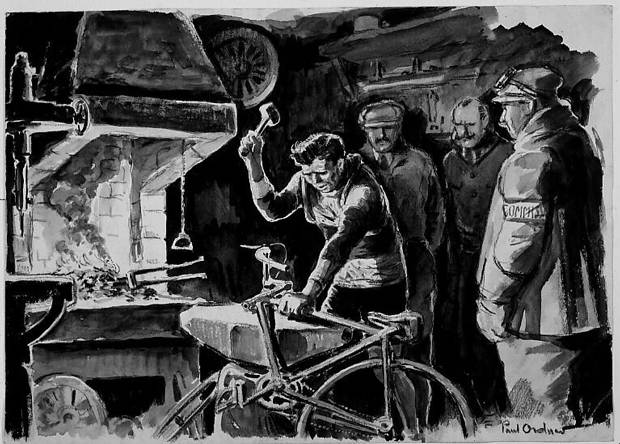 When he finally finished his work, he rode on to rejoin the Tour, all hope of victory gone. He learned later that he had been penalised three minutes for allowing a small boy to work the bellows, while he had both hands full hammering the new fork. (There is a plaque in Ste. Marie de Campan honouring the feat. The tale was always revived when the Tour passed the village, which has since fallen from the Tour’s map, and new generations of reporters seem never to have heard of it.)

Lightning struck Christophe again in 1919, on the next-to-last stage of the Tour, while he was wearing the first yellow jersey. Once again his front fork broke, once again he stopped at a forge to repair it, and once again his lost time cost him the final victory. He was never to win the Tour.

Another rider who never did was Raymond Poulidor, but, boy, did he come close: three times in second place overall, five times in third. In 14 Tours in the 1960s and ‘70s, he missed out on victory because of crashes, mechanical failures, sickness, even interference by a motorcycle but mainly because he competed against two champions, Eddy Merckx and Jacques Anquetil. 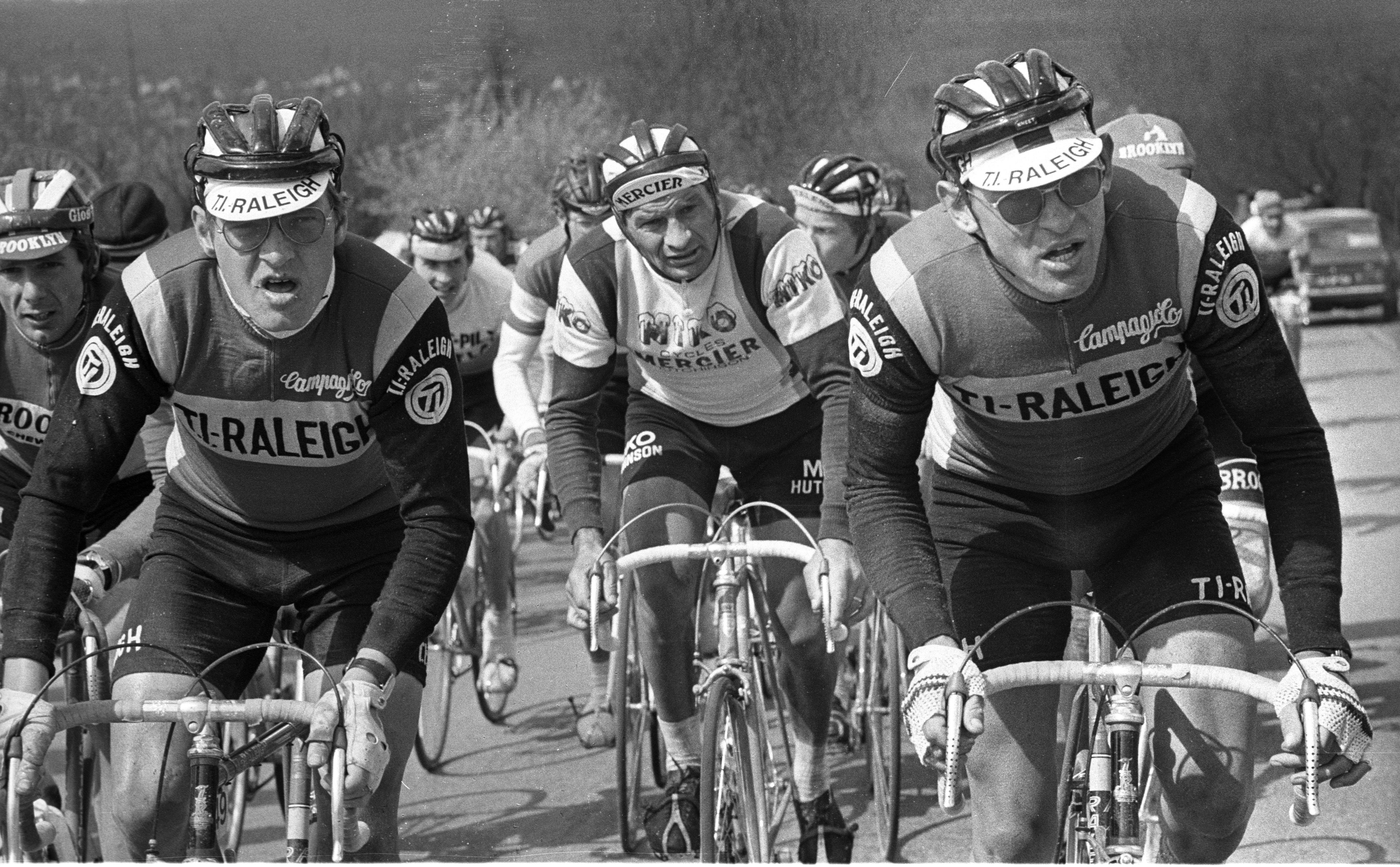 No might-have-beens for them: each won five Tours, and Merckx, the Cannibal, won everything else too.  At the presentation of the 2019 route, Poulidor, always obliging, responded sheepishly to his hated nickname of Poupou (just what you think it means) when he was called on stage. There, he joined Merckx and two other five-time winners, Bernard Hinault and Miguel Indurain.

“Between the four of us, we won the Tour de France 15 times,”  Poulidor joked ruefully.

One rider who also finished first was Laurent Fignon, but, as his obituaries pointed out in 2010, he lamented that he would not be remembered for the two Tours he won but for the one he lost. He was right. The final judgment of his career centred not on his dominance in 1983 and 1984 but on his failure in 1989, when Greg LeMond made up a 50-second deficit in a final-day time trial into Paris to win by eight seconds.

True, everything went right that day for LeMond who used experimental handlebars and an aerodynamic helmet. Fignon had them both and rejected them both. Even the ponytail he wore cost him a little time as it trailed in the wind. Still, he finished third in the time trial. 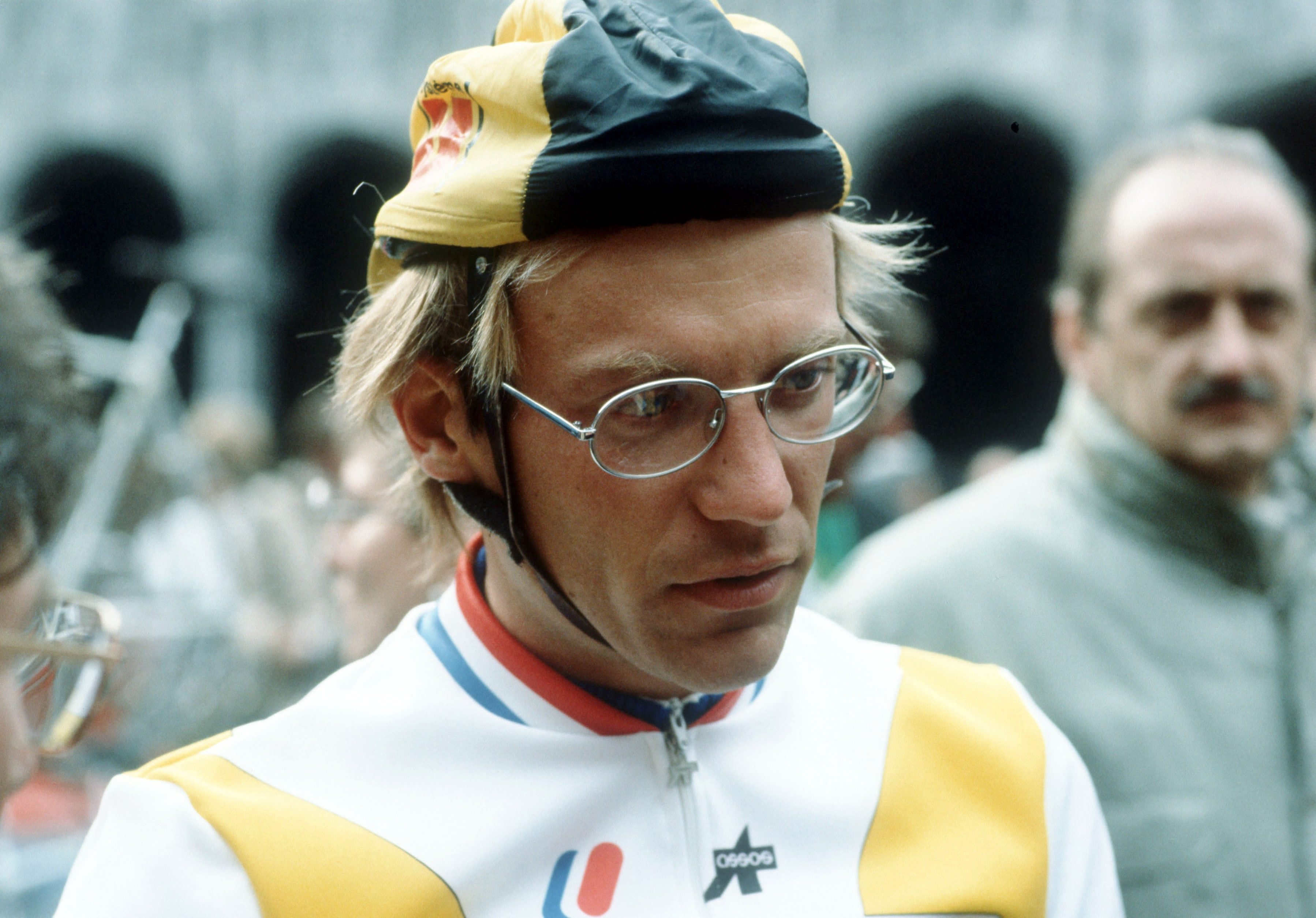 Once he was the prince of French cycling, the winner of  the first two Tours he entered. His performance in 1983 might have been considered a fluke, a victory by an unheralded rider when his team leader, Bernard Hinault, had to withdraw for medical reasons and he was free to ride his own race. As he began to dominate that Tour, his rivals realised that Fignon, only an unremarkable amateur two years earlier, had been growing stronger and hungrier.  (Not smarter, no, because with his granny glasses and a few semesters’ study in a veterinary school, Fignon passed in the pack as an intellectual. His early nickname there was The Professor.)

By 1984, Fignon was a monster, the winner in the mountains—two of four stages in the Alps, second and fifth in the two others—and in three time trials. He mocked the recovered Hinault on climbs, spent the off-season as the darling of café society, rarely missing a celebrity party, loudly proclaiming his powers and then, pouf, like that, declined.

First it was tendinitis in his left heel, which required an operation, a lost 1985 and a long recovery.  In 1986, he was without a victory all season when he had to quit the Tour under bizarre conditions: Fignon announced that he had passed a five-foot-long tapeworm. Worse, said Dr. Gerard Nicollet, a Tour physician, the tapeworm’s head was missing, so who knew how long it really was? (He prescribed pills to flush it out and explained that the problem was common in France, where steaks are usually eaten bleu, or raw inside, and saignant, very rare or bloody.) 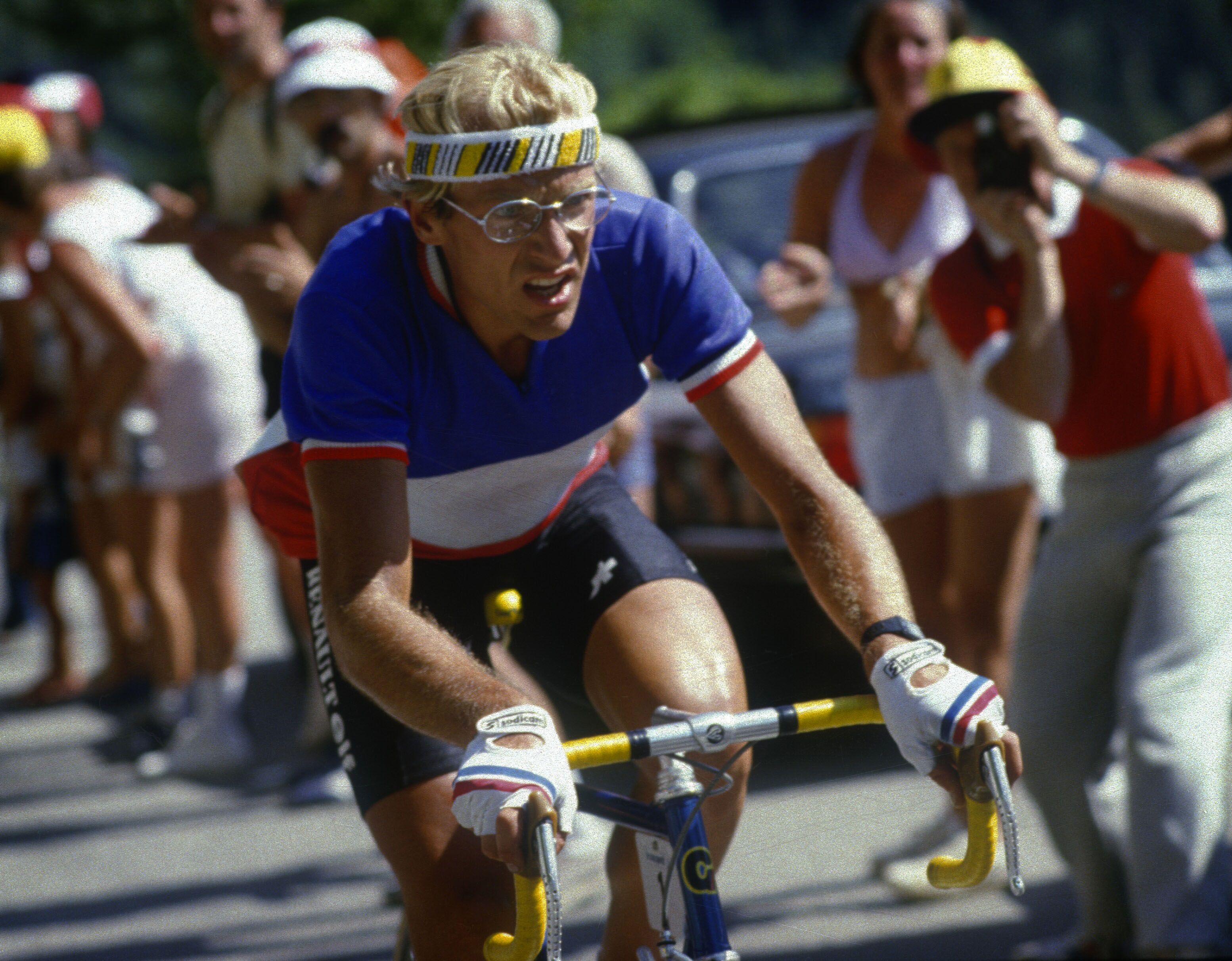 Often overlooked in accounts of LeMond’s victory is the fact that Fignon was having a highly successful 1989 season before the fateful time trial. Until then he won the Milan-San Remo classic and the Giro d’Italia; afterward he finished first notably when journalists awarded him their Prix Citron, the Lemon Prize, as the least likeable rider in the 1989 Tour.  “At least I won something,” he said with sarcasm.

Until his retirement in 1993, even the argumentative Fignon could not quarrel with those who said his career ended on the time trial road into Paris.

Question: How long is a moment of glory? Answer: Alas, only a moment.

Ask Alex Stieda, the Canadian with 7-Eleven who became in 1986 the first North American to wear the yellow jersey. As the Tour opened in suburban Paris, Stieda, then 25 years old, attacked solo in the first of the day’s two half-stages. Before he was reeled in he had won enough bonus sprints and small climbs to wind up with four jerseys in addition to the yellow one: white for best young rider, red for sprint leader, polka dot for climbers and patchwork for best all-around. 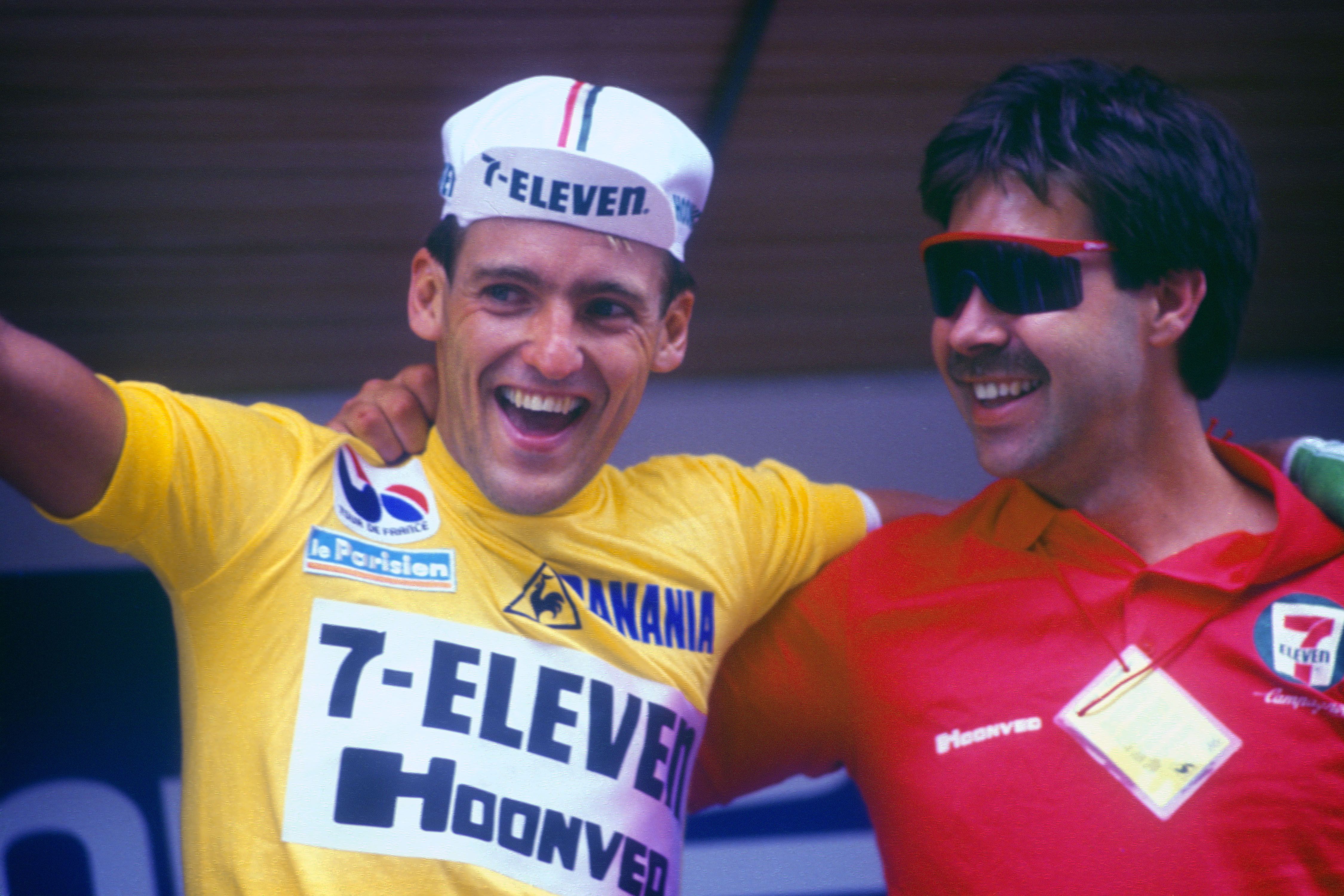 “Just super, wonderful, unbelievable,” he gushed after his 85-kilometer escapade. He was caught 10 kilometers from the finish and finished fifth.

In the second half-stage, a 48-kilometer team time trial, 7-Eleven finished next to last among 21 teams because it had to wait for the exhausted Stieda, who barely avoided elimination. “He was shot, wasted,” explained his teammate Davis Phinney. “We were fighting a strong headwind  and after 20 kilometers he had nothing left after his ride this morning.” Stieda finished three minutes behind his team, going from yellow jersey to 116th place overall.

Might-have-beens, what ifs: They dot our lives, not simply our sport.  In 1903 the young artist Henri Matisse was despondent over his wife’s bad health and his failure to sell any of his early Impressionist paintings.

As Hilary Spurling tells it in the dazzling biography “The Unknown Matisse,” the artist found no takers for his work, not even his brother Auguste or an old school friend, Gustave Taquet, who said long afterward that “he had refused an offer of two Matisse canvasses, with a couple of Cezannes and a Renoir thrown in, for 100 francs.

“It was the moment when we were both trying to launch ourselves, him as a painter, me as a grocer,” Taquet explained. “I needed my 100 francs for buying mustard.”

So, poor fool, he bought mustard.