Winter has hardly passed; I long for the Giro d’Italia. Every year, it is the same. Ever since I was a little boy—it seems to be an obsession. Those years when the Giro was not shown on television were awful. I missed watching the race. It’s true that it was sometimes chaotic, but somehow that made it even more exciting.

Dreaming of the Giro d’Italia is bewildering, to a few so-called cycling aficionados at least. So-called—the real ones know better. Now and then, my passion draws me into an awkward situation. If, during a conversation about the Tour de France, I go and say that that race is passé, no one properly understands what I mean. People might almost accuse me of being a terrible snob—one who would find the Strade Bianche more interesting than Paris Roubaix for instance. That’s fine. It makes no difference to me, but it has to be said for once: no cycling fan can watch the Tour de France without misgivings.

It may be that I get annoyed by the exaggerated attention paid to the Tour by people who show no interest in cycling the rest of the year. The Tour starts, and suddenly obscure figures I hardly know appear on television. They don’t seem to know a thing about what cycling actually involves. If Eva Jinek and Bram Moszkowicz start prattling on about the Tour de France during a nightly show, you know something has gone fundamentally wrong. They are not exactly people who might have anything meaningful to say about bike racing. Or footballers, who appear regularly too—has a cyclist ever appeared on a football show?

That stuff is hard enough to accept. What’s worse is that they all have opinions. The whole year, they show no interest in cycling at all. Mention the Tour of the Basque Country, and their eyes will glaze over. Then, the Tour de France begins, and they suddenly know everything that might be said about this or that rider. They sell themselves as sellers of the nonsense that a Dutchman could win. That is often the assertion of some actor who happens to have just bought himself a road bike.

Such things grate with a real cycling fan. You cannot help but experience that sort of thing as a betrayal. That is it probably; it’s from there that the love of the Giro d’Italia comes. All that bullshit isn’t served up to you. During the Tour, you are forever being confronted with people who suddenly know everything that there is to know about cycling. The Giro doesn’t cause the same affliction. It’s all about the race—and nothing else.

I admit that cycling was completely invented in France—the classics, the grand tours, even cyclocross. Every race is derived from a French prototype. That cannot be denied. It would be a clumsy argument though to claim that the Tour is therefore the most beautiful race in the world, would it not? That was a rhetorical question. It is not. Just because the French invented everything does not mean that they should think that their national tour is the most impressive. They have wasted any to right to that claim anyways, since the average Frenchman does not pay attention to his national race, which is in fact little more than a travelling circus. In France, the people only show a little bit of interest when one of their countrymen has a chance to win. And that will take years, so a tourist has to go out of his way to see a bit of the race. It’s hard to find a café where they show it on television. Horse racing—that is no problem. Such a situation you will never experience in Italy. There, everyone watches the Giro.

There is something very basic that is wrong with the Tour. Is it its boringness? There is not a race that is so predictable as the Tour. Guessing the winner is pretty simple. Every year, a maximum of three riders take to the start line who actually have a chance. Most of the time, it’s already clear after ten days or so who is going to win. There is rarely much of a dramatic arc. The tour suffers from the tyranny of the single rider. It is the kind of race that someone can win five times in a row—or seven if we continue to believe the old statistics. There is not much fun in that. The tension revolves around whether one of the top favourites will crash out of the race.

Better the Giro. There, the strangest things can happen. Predicting the winner is a tricky business. The average Tour fan can’t come to terms with that very well. It would wreck his Tour pool of course.

Is it the exaggerated grandeur? No race is so self-obsessed. Anyone who has anything to do with the Tour thinks he is oh so important. You sometimes get the impression that they would like to organise the race without the racers; they just get in the way.

Better the Giro. In Italy, they love bike racing. It may be true that Flanders is even crazier about cycling, but, let’s be honest: Belgium is too small and geographically unsuited to hold a three-week grand tour. In Italy, a bike racer is a hero, and, once a hero, a hero for the rest of his life. It does not matter if he is later arrested for writing bad cheques or he descends into a world filled with way, way too much cocaine. It doesn’t even matter if he does all of that during his career. Riders who soar high and then come crashing down remain heroes. Every village has one, and stories will be told about that man—even if they are made up—for the rest of his life, so that he will continue to get the attention he deserves. It doesn’t even matter to them if he won races or not; he was a biker racer. That is enough to earn life-long adoration. Look, in Italy, they understand that a rider might—usually out of pure necessity—commit a faux pas. It doesn’t matter to them. No one is free of sin, and, if you show a little bit of contrition, people are prepared to forgive anything. In Italy, they also understand that if the world of cycling only contained honest people, no one—really no one—would have any interest in the sport. That the whole thing gets fucked up now and then is simply a part of it. Pantani? An addict who committed suicide. So what? They honour him as if he were a saint. In France, and in the Netherlands, they will fill entire newspapers if a rider does the smallest thing that’s not allowed. Those journalist have no clue how cycling works. Countries with such attitudes do not deserve to organise the most beautiful race of the year. The Giro—it’s about unconditional love for cycling.

The Giro d’Italia is also a lot more exciting. That is easy to prove. The Italian grand tour has been won by less than a minute more often than it has been won by more. Critics of the Giro—unbelievably, they do exist—claim that such a thing is explained by the fact that the organisers are often opportunistic. That is true. They have no issue whatsoever with adjusting the parcours to create more of a spectacle.

People may rightfully claim that they influence the race. I do not have any problem with that. In this case, opportunism is something positive. The problem with the Tour is that the organisation has abolished imagination. It has become the most predictable race of the year. Flat approaches lead to bunch sprints. Then, there are a couple of mountain stages, where the spectacle begins a couple of kilometres from the end. As a matter of fact, people do not even need to watch the Tour, as it’s become so predictable. If the Tour is supposedly a monument of pure sport, in Italy they realise that a race needs to have an enduring hold on people’s attention. There, they realise that excitement, conflict, and spectacle must be maintained to keep the public’s notice. So, the race’s organisers know that they need to keep coming up with new attractions. If the parcours of the Tour is always pretty well the same, the Giro will always have something in store that is, uh, pretty unexpected.

I would dare to say that the Giro is organised by artists—theatre people with a real sense of drama, who make sure that every new episode is totally different from the last. The Tour is more something put on by managers—cool calculators, who in the end are more interested in the contents of their wallets than the quality of the theatre. At the Giro, people will look through their fingers at the odd instance of unfairness or unsporting conduct without hesitation. In any case, there is a lot that is just not worth worrying about. That’s good. Honesty does not make for intriguing races. 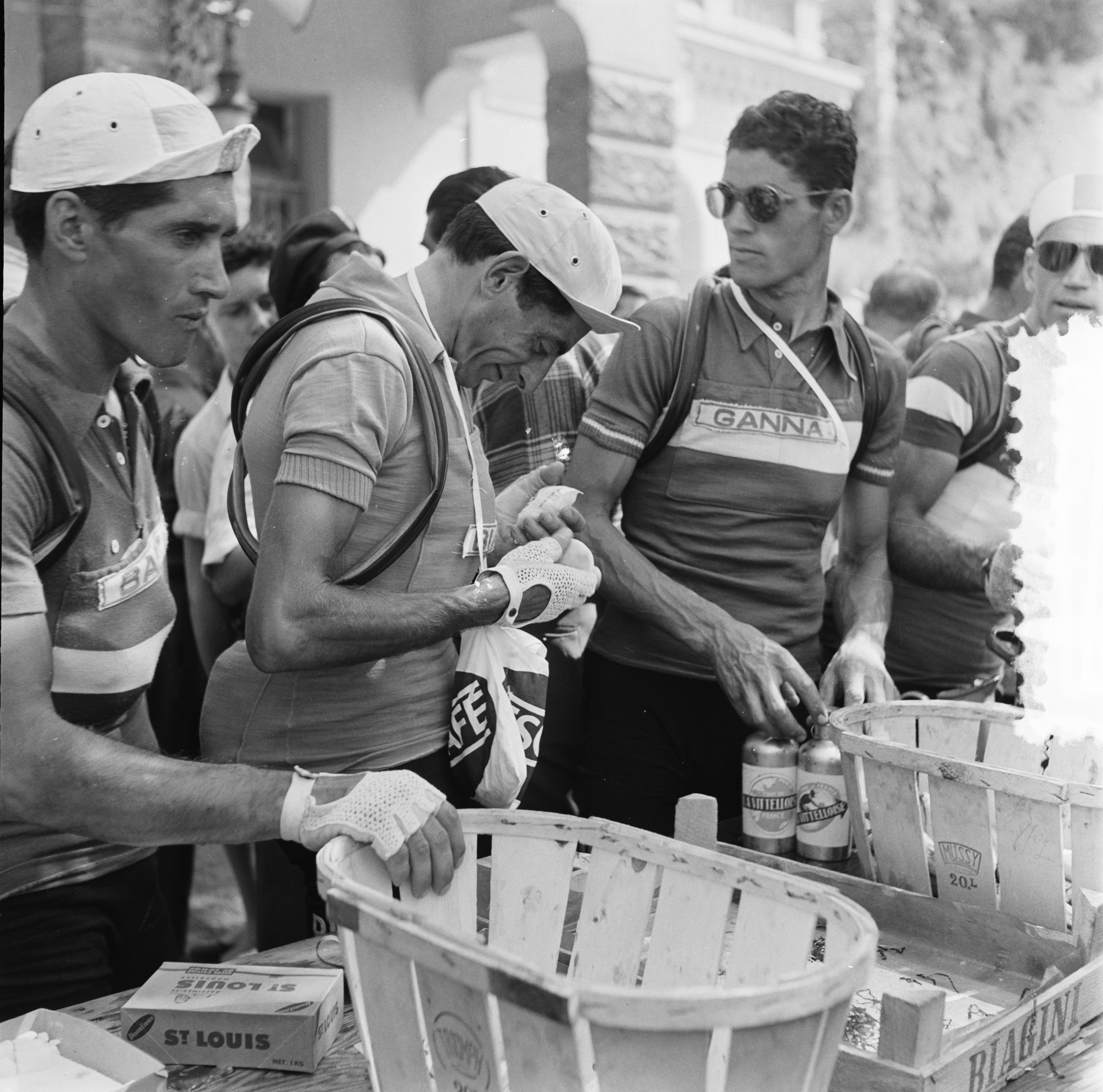 The Italian grand tour is also a good deal more pleasant to ride. Ask any random rider where he best likes to race, and he will answer: the Giro. The Tour is a monster; danger lurks everywhere. Especially during the first week, there is a good chance that a candidate for the overall win will crash and fall from the race for victory. The Tour is way too big. People pay no attention to the riders. They just get in the way of the business plan. The Giro has pleasant family atmosphere. Everyone who loves racing is welcome. Yes, former champions are celebrated at the Tour, but it feels just a bit disingenuous. There, offering some praise to a former participant now and then is a necessary task, because people sometimes invite former riders. But there’s little passion in it.

It is sad—is it not?— how a legend such as Raymond Poulidor was treated. The man sat there at his table, always advertising something. It was never quite clear what it was. In Italy, a former rider can not walk freely in public. Everywhere, he is accosted, as everyone wants to touch him and beg for his autograph. That is an essential difference. In Italy, the fans’ enthusiasm is essential to the race. Gino Bartali, for instance, rode in the caravan well into his old age, and was sometimes pulled, quite literally, from the car by female fans who would scream like young girls, as they hugged him and then kissed the ground where he had stood. No one keeps calm. They are like a family that comes together with reckless enthusiasm for their yearly reunion. The Giro d’Italia is ridden with the heart, the Tour with the head.

That is the Giro: respect for racers.

In Italy, they breathe cycling. With the right feeling for drama, a spirit of freedom reigns, away from the staid world.

The race is flashes of action in a wild decor, a magnificent opera. When Pantani was kicked out of the race in 1999 on the next to last day, because his hematocrit was too high, it was simply a gripping and spectacular finale to the race. For years, doping in Italy was just a story. In France, they have tried to counter doping by designing easier courses. In Italy, they realise that a flatter parcours will only lead to a boring race.

And flattening the entertainment value would be fatal. In Italy, they realise that all too well. So, they find uphill finishes, and not just little pimples. Nope. The harder the finish, the better. That is the Giro: real cycling.

It is all quite simple. Thanks to its spirit, its unpredictability, its passion—in short, everything about it—the Giro is the most beautiful race of the year.

And then there is Renaat Schotte. But that calls for another argument.