The Limey Project: A long, weird cycling odyssey into the heart of the USA

In his new book, ‘The Limey Project’, Adam Stones captures an extraordinary, comic and eye-opening cycling journey into the heart of the USA. In this adapted extract – exclusive to Soigneur – Adam and his travelling companion, ‘Killer’, progress eastwards, into the desert. Halfway into the 4,500 mile journey and they find they are still encountering everyday surprises and learning of the immense joy of a long journey by bike.

The unforgiving desert sand in the east of California was a far cry from the Baywatch beaches we’d left at the coast. On our last day in the state, we peeled off the road at dusk into a sheltered spot, behind some tired-looking, brittle trees. The whole place felt Martian; dusty, rock-scattered, never before troubled by man. We were exhausted, totally exhausted from the headwinds and hills and drained by sunstroke. I stripped completely naked and collapsed into my tent, gulping my precious water reserves to fight a pressing headache and knowing that if the desert’s beasts wanted to invade my lodgings I would not be able to even raise a penknife to them.

The deep cold of the morning restored us enough to go a few miles to the first gas station to stock up on essential provisions, like coffee and donuts. With so few roads and with the sun blazing in front of us, it was impossible to get lost but we wanted to see what lay ahead, so as we refueled we perused the maps and discussed its erratic contours. 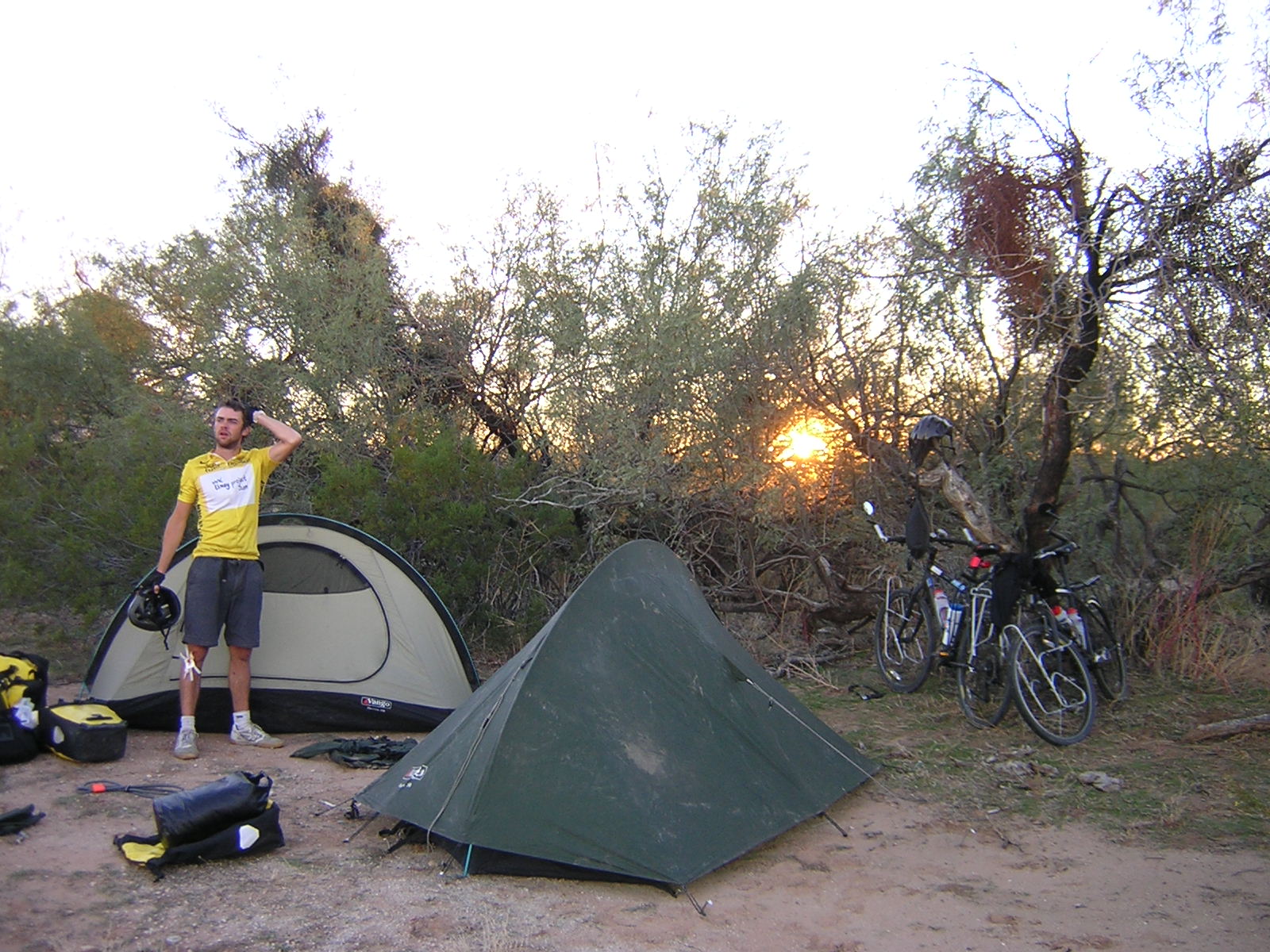 A woman started walking over to us. She sighed, rolling her eyes. “OK, where y’all headed?”

“Suit yourselves. Where y’all from?”

“Oh great. I met a lovely couple from Denmark a couple of years ago.”

We looked at her blankly, silently.

“Uh huh, Denmark,” she repeated, and then walked away.

In these parts, the search for a connection was finding new stretch. Anyway, it was a good introduction to the standard of roadside conversations we could expect for the next few weeks.

We pressed on to cross the Colorado River. Half way along the bridge, we ceremoniously clapped each other into our new state: Arizona.

The state flag was one of the finest; the bottom half deep blue, the top red with yellow sunbeams emanating from a central, copper-toned star. Of course, the design was deeply symbolic, representing the river we were standing above, the region’s mining industry and the number of sunbeams corresponded with the original 13 United States. But, to me, it was just a flag that said, ‘You’re a long way from home now’ and that feeling danced inside me.

The scenery enforced this feeling. We were heading for the town of Quartzsite and the road approaching it was another glimpse into the vastness of the land we were entering. The town sat shimmering white in a long valley and looked like it must be just a couple of miles away but it was in fact over ten miles before we started to even come close. We would experience similar distance and scale shifts in the days ahead – there would be a few times when we would point our bikes along a road towards some far-off, hazed target and would labour for what felt like hours without drawing it any closer. And on some of these roads, we’d have no idea if we were descending or ascending. In this huge place, you could only tell if you were going up or down by the experienced ‘feel’ of the ride. And it felt tough.

We were on the Interstate road again here and were forced to balance the threat of avoiding scraps of broken metal and glass along the shoulder with the threat of the gargantuan road train trucks that bore down on us. The only positive was the trucks carried us with them in their wake, offering temporary – albeit hair-raising – respite from the fierce headwinds.

Quartzsite found form as a strange assembly of truck stops, snack shops, dusty shacks and parking lots. In the past it had been a fort and trading post but gets its name from being a quartz site (see what they did there?) and therefore an important mining area. It hadn’t always had the best reputation – one visitor in 1875 commented that it ‘reeks of everything unclean, morally and physically’. I couldn’t see much immediate charm in the place but it seemed harmless enough, with tourists driving in to see and swap precious stones. We pitched up in a campsite – our first in some days – and went to wash. I noticed my face was caked in dirt, and my shorts were striped brown and white from desert and sweat. Maybe there was something still ‘reeking’ in Quartzsite. 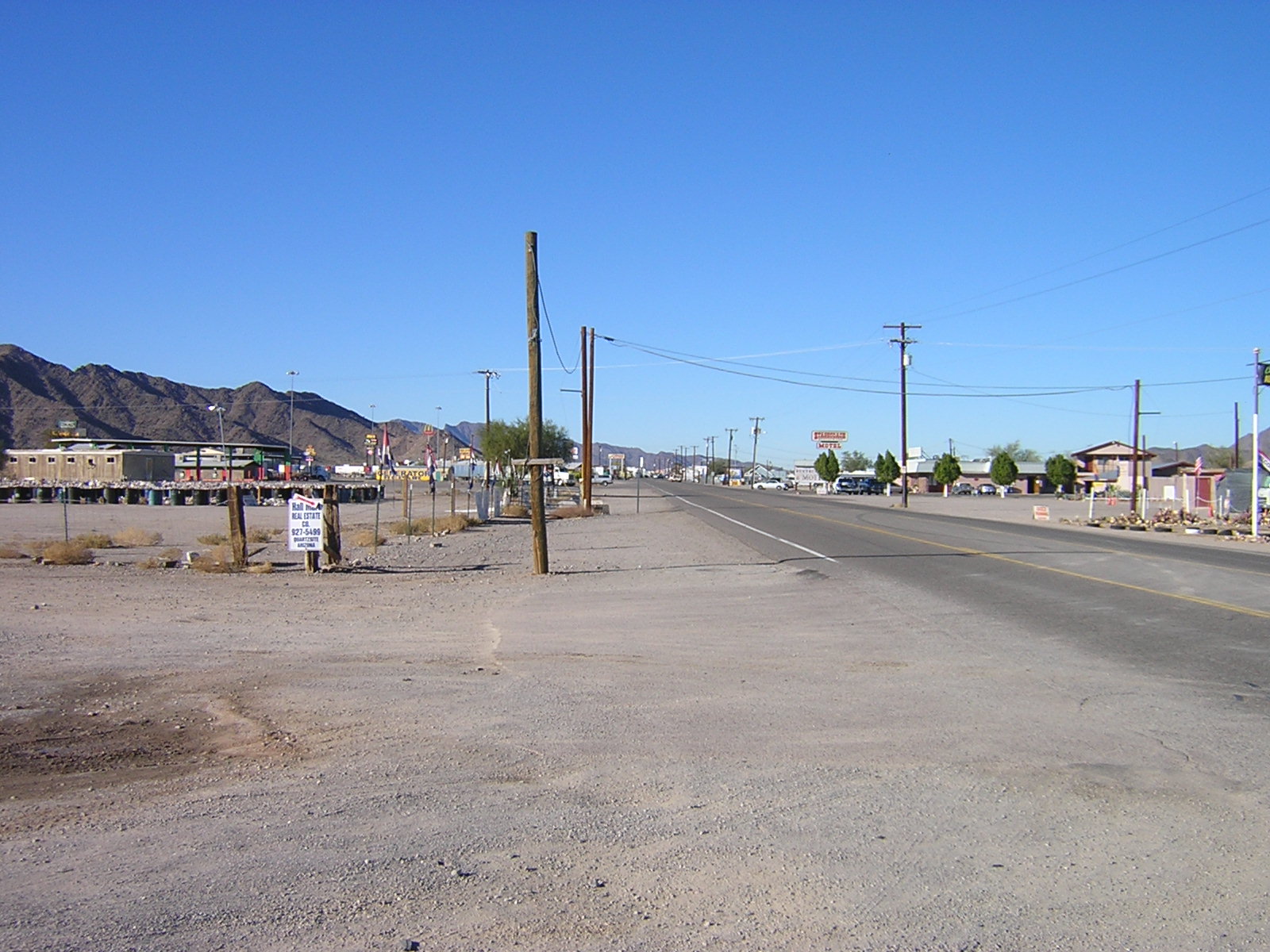 The path beyond town was marked by mountain passes and low-growing scrub; spiky bushes aside scatterings of broken rock. In some places it was also clustered with huge Saguaro cactuses that looked like cartoon green men holding their arms up to invisible Wild West gunslingers.

We’d been advised to carry extra water here given the distances between towns and settlements. Every time we had to fill up our water bags and tie them on to our bikes, it caused some celebration in my soul for the wild places that still existed.

The beauty extended from landscapes to lightscapes. Every sunset and sunrise revealed a thick soup of pastel pinks, blues and yellows that filled the entire heavens, and lingered. At these times, the mountains were jagged silhouettes, looking as if a piece had been torn from the bottom of a paper sky.

As we left Quartzsite, the road looked flat but we felt we had been rising and sure enough the map revealed we had come up 1,500 ft by the time we got to the town of Hope. There wasn’t much to it; it was a typical desert community – a gas station with a small store and an RV parking area. But Hope did have something else – a Vietnam Veteran to chat to. He sat on a bar stool in the store like an abandoned film prop, wearing a long beard, an American flag bandana and ripped denim shirt. He asked us for some change, “I’m just a vet’ trying to get by, man…” he said; a well-rehearsed line. 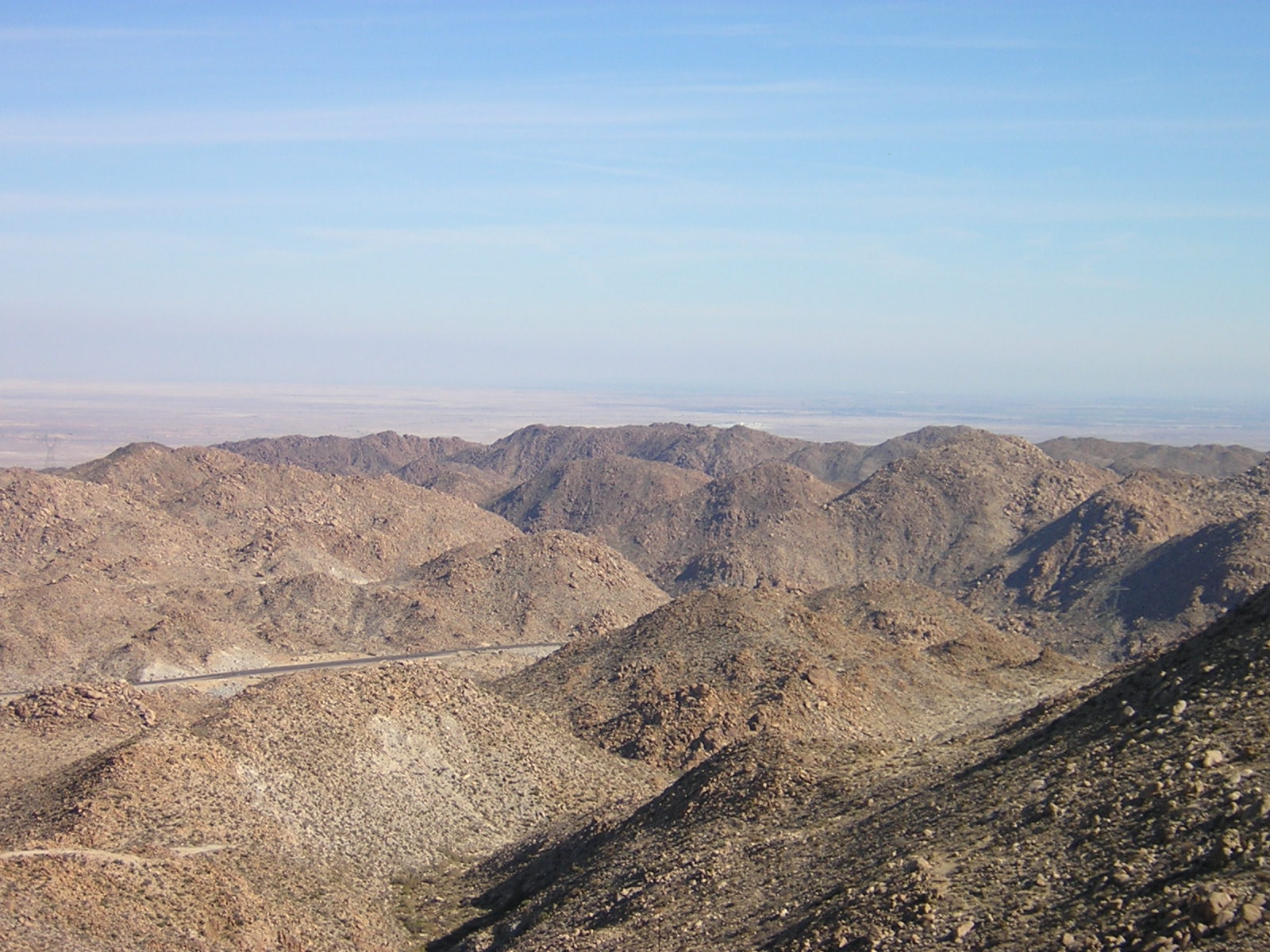 “Do you live in hope?” I asked him, to which he nodded, thankfully ignoring my crass joke. Indeed, the main enjoyment to stopping at Hope was the wordplay. When we arrived, Killer had called out to me, “I feel great – I’ve found hope!” And when we went to leave I asked Killer to hold my bike while I sprinted off, shouting, “I have to go. I am running out of hope.” Devoid of few other distractions, such simple things continued to throw us into fits of schoolboy-sized laughter. But our efforts were dwarfed by a large sign about a mile down the road that simply stated, in fading paint, ‘You are now beyond Hope’.

The run in to Phoenix was fast and fun. The wind was finally on our backs for much of the day and we ticked off another ‘must see’ as huge numbers of tumbleweeds blew past us. I hadn’t realised they existed outside Roadrunner cartoons and John Wayne movies. We cycled on town roads and cycle paths and next to canals. We passed kids playing ‘soccer’, families out for walks and general signs of civilisation. After days where desert free-camping and late night investigations by coyotes was our new reality, this had all the normality of having come through the looking glass.

We traversed endless miles of urban sprawl wondering where in the hot hell we were – Phoenix covers 100 square miles and so there’s plenty of suburbs to get lost in. At a gas station in Mesa – named a town but really just part of the Phoenix’s eastward expansion – we stopped to get our bearings and it wasn’t long before we had attracted attention.

As Killer went in to use the toilet, the usual opening gambit was launched at me, “Where y’all headed?”

The voice was a slow, thick drawl. It came from a man, about four feet tall, wearing tight jeans, sunglasses, a cowboy hat and a leather jacket with pin badges crowding his lapels.

I laughed but he stared at me to show he was not joking and then pointed at his own bike, which was resting against a wall. It was a battered old mountain bike with two wire baskets strapped on as rear panniers and a Stars and Stripes flying off a short flagpole at the back.

He rolled a cigarette and started smoking it through deeply stained teeth, then he looked at me above the rim of his glasses to suggest it was my turn to say something.

“OK, er, yeah, we have had a good trip so far but everyone has been warning us about Texas.” 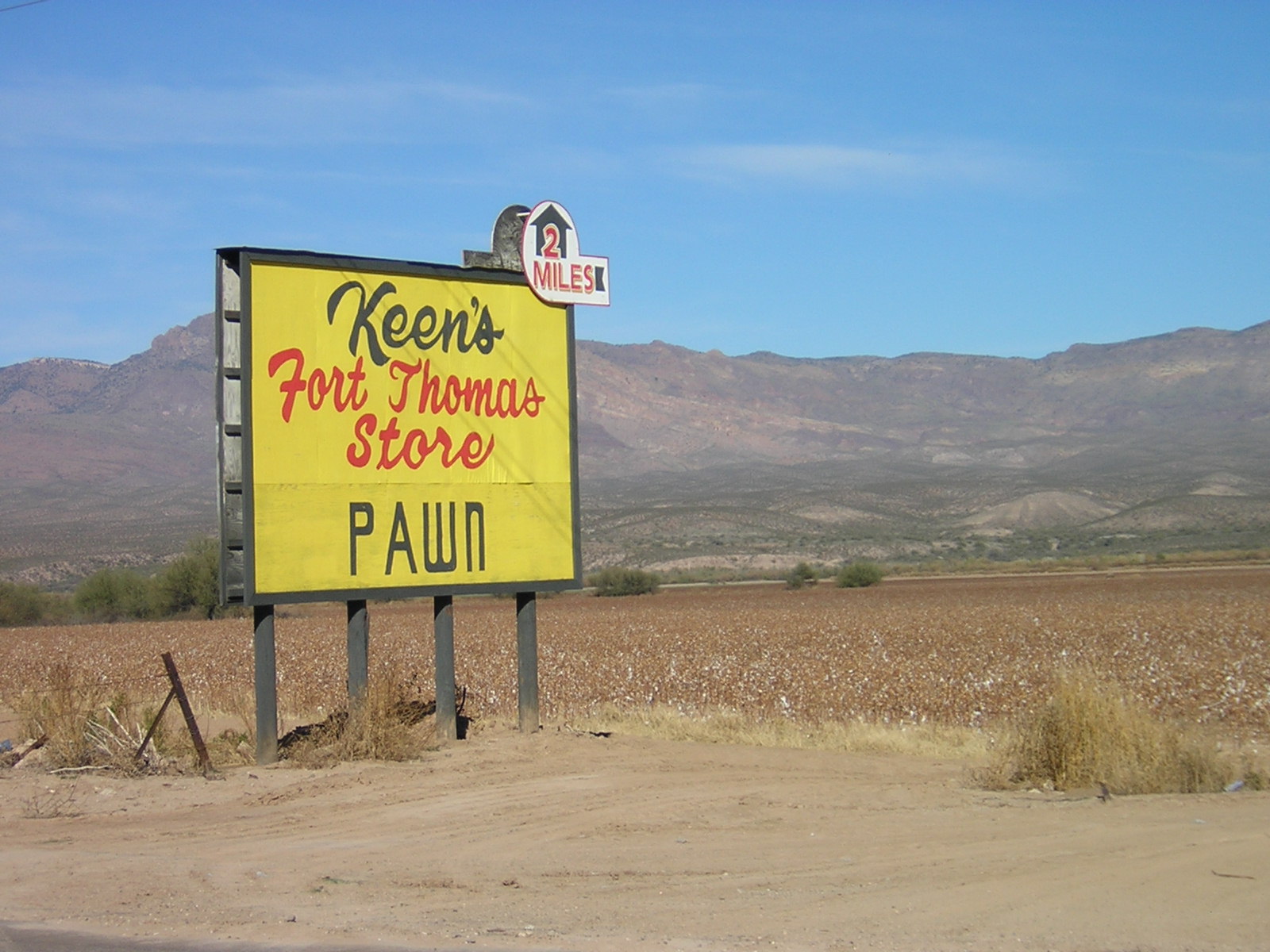 I looked around to see if anyone else was witnessing this dialogue – a hidden camera perhaps – but there was no one. Killer eventually arrived, took one look at my new friend and then turned to me, saying loud enough for the man to hear, “Let’s go, we don’t have time for this sort of nonsense.”

The man was insane to suggest he or anyone could cover thousands of miles of mountains and desert in a day, but either way, we hadn’t come to eat up the miles but America itself; its people, culture and, yes, sometimes junk food.

Within a few more blocks we found a motel and made camp in the luxurious twin beds after hot showers. We ordered pizza, drank beers and watched three Morgan Freeman films back-to-back (an act so pleasurable it is now known as a ‘Morgasm’). We then slept deeply for 13 hours. It felt then it would be extremely hard to leave this luxury. But if we could, the most breathtaking and challenging scenery the States had to offer would be waiting for us. 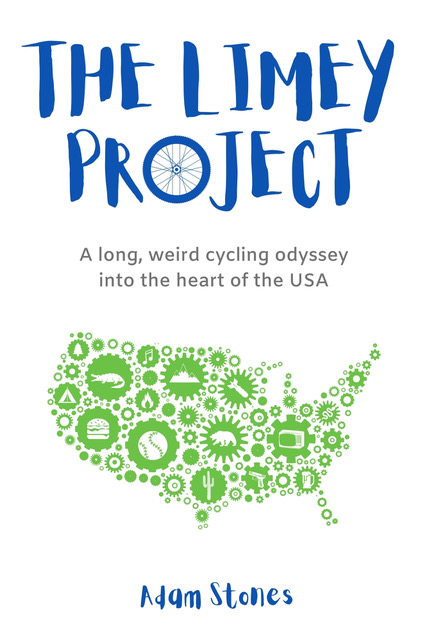 The Limey Project: A long, weird cycling odyssey into the heart of the USA is out now.