Italian Valise
THE BEST OF TIMES, THE WORST OF TIMES
Stories 6 min

Tekst Samuel Abt Gepubliceerd 17 May 2019

The craze for selfies seems to have ebbed, and good riddance. Anybody who lives in or near Paris, as I do, risked being poked in the eye by a selfie stick at every photogenic corner. While I never took part by pixel, how about a few selfies by old-fashioned words?

Let’s give it a try and beam out to Lance Armstrong, Miguel Indurain, and the authors of Wheelmen.

Over the years, in many dozen one-on-one interviews with Armstrong, I asked questions about doping. Early in 1999, when rumours of his use of EPO surfaced, I pressed him about it. Yes, he replied, on his doctor’s prescription, he had used EPO during his recovery from cancer. I quoted that in an article.

Later that year, during the Tour de France, I asked him point blank if he was doping.

“Emphatically and absolutely not,” he said. “I’m not stupid. I’ve been on my deathbed.”

I quoted that too.

In Pau, during the 1999 Tour, Armstrong went head-to-head with a reporter at a news conference and deflected questions about doping.

I reported that without overmuch elaboration and noted his insistence that he had a medical certificate permitting his use of a steroid cream for what he described as a saddle sore. In short, I trusted him.

One person who didn’t trust him was Mr. Le Monde, the reporter for the French daily newspaper that was notorious for its aversion to bicycle racing and suspicions about riders.  (A few years later, Le Monde bought the regional newspaper Midi Libre and quickly canceled its venerated one-week race.)

Mr. Le Monde, whose name I don’t remember, tried to reply to Armstrong at the news conference but was brushed off. No other reporters spoke to support him and most ignored him during the rest of that Tour.

The following year he was gone, changing his beat from cycling to environmental issues.

One of his first stories was the fouling of beaches in Brittany when an oil tanker emptied its loaded bilges offshore. The cleanup took weeks.

“Some change in my reporting I made,” Mr. Le Monde told friends. “I went from sludge in cycling to sludge in the ocean.”

So, Lance: During your round of apologies to people you had wronged, did you get in touch with Mr. Le Monde? If so, how did your meeting go?

As a talking point, I recommend the words of the 19th-century explorer and adventurer Sir Richard Burton, one of the first Westerners to penetrate the Muslim holy site of Mecca, disguised as an Arab. He wrote: “It is impossible to ignore the dear delights of fraud and deception, the hourly pleasure taken by some minds in finessing through life and in playing a part till by habit it becomes a nature.”

Your thoughts, please, Lance. You can send them by selfie. 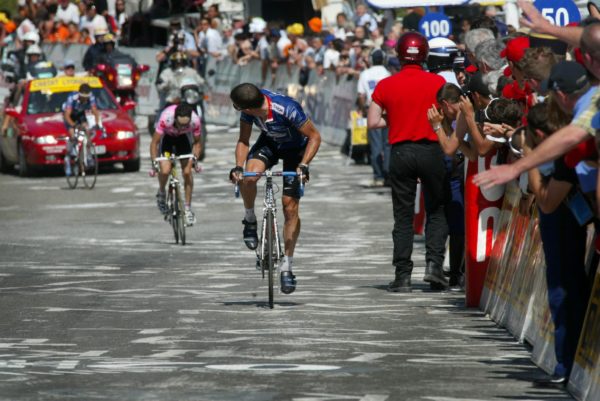 To anybody who watched Miguel Indurain win five consecutive Tours de France in the 1990s, this is absurd: He stands just 21st in the all-time ranking of cycling champions. You heard that right, Big Mig, 21st! He ranks considerably behind such pale shadows as Joop Zoetemelk, Alejandro Valverde, and Davide Rebellin, and only a bit ahead of Alberto Contador.

Who says so? The Dutch site CyclingRanking does, as reported by Daniel de Visé on The Outer Line site. He also polls some individual riders, among whom only Lance Armstrong lists Indurain in his top five while unblushingly rating himself in second place all-time.

For the record and the memory-impaired, during his career from 1984 through 1996, Indurain won those five Tours (1991-96), the Giro (’92, ’93), the Tour de l’Avenir,  and the world time-trial championship twice. He set a record in the hour ride against the clock and won the time trial in the Olympics. Add in victories in Paris-Nice twice and the Dauphine. Not too shoddy, is it? For a rider ranked 21st, a couple of notches behind Erik Zabel…

Would any of this disrespect bother Indurain? Certainly not. Nothing seemed to bother him. He made news only twice in his career for displays of temperament. The first occasion was in 1992 when somebody stepped on his feet while he was changing his shoes before the start. In pain, Big Mig yelled at him, making headlines on what must have been a slow news day.

The second show of anger occurred a few years earlier when, badgered by reporters, he offered them the universal sign of dismissal, the upraised right arm gripped over the elbow by the left hand.  That too was front-page news in Spain.

So no temperament, no excessive celebrations of victory, a willingness, perhaps even an obsession, to allow rivals to take a stage victory in the mountains a flicker ahead of him.

Fans thought of Indurain as a placid rider with great finesse.  Standing 6 feet 2 and weighing just south of 180 pounds, he seemed instead to personify power. He climbed relentlessly and demolished his rivals in time trials. Remember the one in 1992 over 65 kilometres when he finished three minutes ahead of the second-placed man? Gianni Bugno dubbed him “The Extraterrestrial” for that feat of brute strength.

Yet, finesse too. Indurain’s rivals noted that in all his Tour victories he crashed only once. They admired his bike-handling skill, his deftness at avoiding the wrong place at the wrong time.

Watch a film of Indurain manoeuvring his bicycle through a crowd on his way to sign in for a stage: Whistling quietly to part the fans, he moves steadily forward, bumping into nobody, slowing here, slowing there, but never stopping until he reaches the sign-in. Finesse. 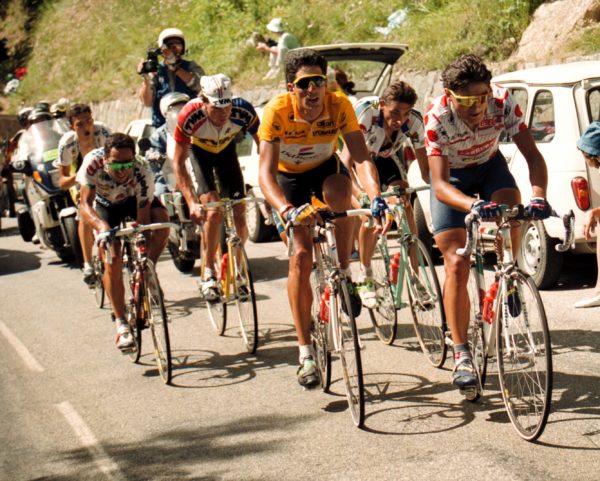 Hi, Reed and Vanessa, it’s me. (Background: The peloton, underdeveloped and out of focus)

Albergotti and O’Connell understood business, since they both worked for The Wall Street Journal. The jacket for their 2013 book Wheelmen describes him as “a white-collar crime reporter” and her as someone who has written about “tobacco, alcohol, guns, insider trading and the Deepwater Horizon oil spill.”

For the casual reader, their book is an overview of bicycle racing as a scandalous business, although it seems careful never to connect the dots too tightly. As an account of actual racing, it’s pretty lame, with many small mistakes and little sense of the authors’ being anywhere near the Tour de France, even as spectators. In short, I thought their book might sound authoritative to readers who knew nothing about the sport but superficial to those who knew something.

On a personal note, I had problems with their reporting.  Here is an extract of an e-mail I sent to them early in October 2013:

Since you cite me and my reporting for The New York Times, I wonder if you could take the time to answer two questions: On Page 97,  you seem to quote me as describing Lance Armstrong’s going “on a soul-searching awakening that included every kind of trope of self-discovery except a pilgrimage to Tibet.” Did I really lapse into such florid prose or is that a paraphrase? Could you cite an article I wrote?

Far more important, on Page 338, you mention my article “Rip-Lance Time” and say that I admitted I didn’t pursue the doping story because I didn’t view that as my job as a sports reporter. I’ve read and reread that article and can find nothing even vaguely that corresponds to your statement.

Therefore I view it as a lie and defamatory unless you can justify it. Please let me know.

They haven’t. I sent the message again late in November 2013. In January 2014 they responded simply that they had received my message.

“And?” I replied. That hasn’t been answered either. It’s been six years.

For those with time on their hands, here’s a link to my piece about Armstrong: http://www.nytimes.com/2012/08/27/opinion/rip-lance-time.html?_r=1&pagewanted=all

If you can find the disputed statement, you’re a better man than I am, Gunga Din.