Seasons in the sun

A former cyclist once told me there were about 120 Italian professionals, and they were divided into five distinct groups.

And he was right. Or, to put it another way, a few were chosen, and most were not. Most were the guy in our photo, Angelo Conterno. He was one of the very good ones, but I’m casting him as our lead actor, our metaphor and, with a fair wind, our hero.

The photo looks bad, doesn’t it? It’s Angelo — whom I’m supposing you’ve likely never heard of — at the conclusion of the 1959 Giro del Lazio. He was about to win that race, and with it the Italian national championship. Then, however, this happened, and that explains at least in part why you’ve never heard of him. That’s your loss, but most of all it’s his. It cost him a night in hospital, a maglia tricolore, more crits than you can shake a stick at, and worse still, a place amongst the champions. One way or another it cost him a fortune, and a fortune was a hell of a lot of money in 1959.

Most retired cyclists claim to have been unlucky. It’s the badge of their creed, because they didn’t win much and they feel the need to find excuses. Angelo was never much for excuses, but God knows he needn’t have looked far. First off, he was the guy who had to compete with Nino Defilippis, a thoroughgoing champion, for the hearts and minds of the Torinese public. Problem was that Nino came from a rich family and Angelo didn’t. Nino had the gift of the gab and Angelo didn’t. Nino liked cultivating friends in high places, and Angelo didn’t (he preferred to cultivate asparagus, and by all accounts he was very good at it). To be fair, Nino had a sprint and Angelo didn’t, which is why Nino won seven stages at the Tour and nine at the Giro, and Angelo… Well Angelo ran away with the 1952 Trofeo Ponsin.

That point about the Trofeo Ponsin is a bit disingenuous, and I’ve utilized it mainly for illustrative purposes. In point of fact Angelo won upwards of 30 races, including a 352-kilometre Giro stage (!) in 40 degrees heat. That’s because there was nobody quite like him, and because he made up for his physical shortcomings with the stuff of cycling. He’d the head of a mule, the heart of a lion and, as anyone who knew him would testify, the constitution of an Argonaut.

One of his wins was the 1956 Vuelta, by 13 seconds. It was one of the more heroic performances in the history of the race, but because he was Angelo it never really resonated. That’s a travesty, because to win he’d to see off atrocious weather in the first week, and then guys like Bobet, Koblet and Bahamontes. They’re three Tour de France winners you likely have heard of, and so Angelo’s having won didn’t play at all well with the Spanish press. They omitted to mention the fact that he’d survived a crucible, and instead made out it was all some sort of a fluke. They informed us that he’d only won because the Italians had coalesced with the Belgians, and that he’d been in receipt of a helping hand on the final climb.

We’ve already established that Angelo wasn’t quite as talented as Nino, but like most of his creed he’d a refined understanding of macroeconomics. He also understood that the Belgians, for all that they seemed like a bunch of half-bred Neanderthals, had an innate grasp of aggregate demand. The Belgians knew how to leverage a commodity, and theirs was the fact that they were great, larruping flahutes, while the Italians were all guys like Angelo: short-arsed climbers. They could be smashed to pieces on the flat, but it wouldn’t serve any purpose because they knew that if they came in together their sprinter, the great Rik Van Steenbergen, couldn’t lose. If, therefore, the Italians could be persuaded to internalize their externality (or “pay”), the Belgians would ensure that the stages would finish with a gallop, and double their pesetas. Didn’t they sign the Treaty of Rome the following spring? 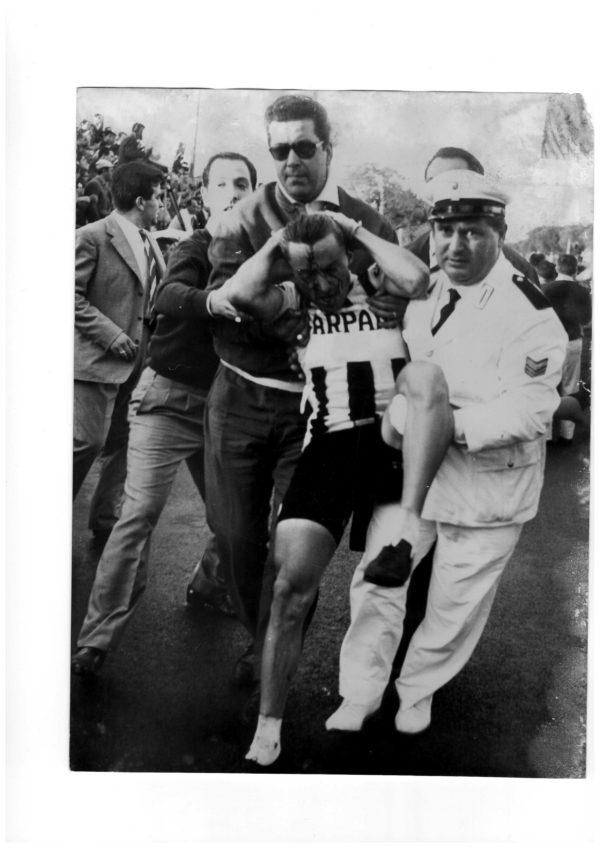 The Spanish press also conveniently forgot that Angelo rode the final stage with pneumonia. Notwithstanding the fact that Bilbao was a kiln that day, he was delirious with cold. He begged his teammates for a rain cape, a heavy jersey, anything to make it stop, and of course they told him to go to hell. He told them that hell was precisely where he was, but they told him to keep his head down and his stupid mouth shut. They knew that if the Spaniards saw him in his winter kit they’d deduce that he was stuffed, and they’d have been right. They’d have gone after him there and then, and he’d have been in all kinds of purgatory. There was no way he’d have survived, they’d have lost the jersey and the money, and the Belgians would have demanded payment anyway. Some of those Belgians were big blokes. They’d hands like butchers.

By the time he reached that last climb he was spitting blood, but not in some lazy, facile, literary sense. He was doing it because he was subject to a systemic pulmonary failure, which would trouble him for the rest of his life. As such, the helping hand was kind of the point. He got it because he deserved it, and he deserved it because he was so wrecked that he had no idea where he was or what he was doing. He never denied having received it, but there were mitigating circumstances. He was blacking out, quite literally, on his bike.

Angelo’s out-of-body experience had no spiritual basis, but it does explain why his maillot amarillo is to be found in the Santuario di Oropa. As likely as not you’ve heard of that, because they’re forever finishing Giro stages up there these days. They feel the need to invoke, ad infinitum, Pantani’s stage-winning exploit there in 1999. That’s fair enough, because Cultus Pantanicus decrees that he must and will be beatified. If, however, the Pantani disciples were possessed of a grain of catholic probity, they’d remove the bandanas from their potato-heads, and make a pilgrimage to the Galleria ex voto. That’s where the votives may be found, the true grace. That would explain why, immediately he dragged himself out of hospital, Angelo Conterno and his teammates deposited the jersey.

Here endeth the sermon, because ours is a story about 1956, not 1959. We include it here because… well because it’s good.

Angelo hadn’t started cycling until his twenties. That meant that by his 35th birthday, when the others were pretty much stuffed, he was in his prime. He was still stuck in the third tier, but all he’d need do was win the maglia tricolore and then, by definition, he’d be in the second. He’d be one of the champions. Take that, Nino!

The only problem was that winning the championship wasn’t so very easy. It was run off over five single-day classics, ergo five dirty great banana skins for Angelo Conterno. He got round the first of them, down in Campania, but he was seventeenth in a sixteen-man sprint. That was just about par for the course, but the second was right up his street. The old Tour of Tuscany was long at 259 kilometres, and just like Angelo it was as tough as teak.

Angelo was in a four-man break, and what with the others being knackered he looked set fair. The problem this time was that Benedetti went and baulked him and so, his collarbone aside, Angelo had nowhere to go. He’s to brake, and thus Zamboni came round him as well. The jury hummed and hawed for two full hours, and in the end they decided that Benedetti had been a wazzock. They disqualified him, which was all fine and well, but it didn’t alter the fact that Zamboni had picked Angelo’s pocket. To him the spoils, the points and the cash, and to Angelo second place and yet another bloody moral victory. A sow’s ear.

Most agreed that Angelo was the model cyclist: serious, highly professional and absolutely correct. He was also a genuinely nice chap, and sooner or later what goes around comes around, doesn’t it? Doesn’t it?

Next to Milan-Vignola, and this time Angelo wasn’t hanging about for the sprint. He dropped them on the drag up to the finish, and so that was that. Ostensibly. Forty yards or so from the line a press motorbike saw fit to crash in front of him, and so guess what? He’d to brake and swerve to get out of the way, and the guttersnipe Zamboni came round him again!

The upshot of all this was that Angelo needed to win the Tour of Lazio, and of course that’s what he was about to do, what with him being the best and all. That was until our photograph intervened and he finished up, once more, in hospital. I should point out at this point that I’d have liked to include another photo1, taken about ten seconds before this one. It was taken by a photographer positioned behind the finish line, and it shows the back of one of his photographer colleagues. The colleague’s name was Giuseppe Genovesi, and he was a nice chap, seemingly. However, he had two major shortcomings as a cycling photographer. The first was that he failed to understand displacement vectors, the second that he was unfamiliar with Conterno’s Law. As such he positioned his gormless self just a few metres after the finish line on the right of the carriageway, directly in front of Angelo Conterno, who was balls-out for the Italian national championship. I should say had been balls out, because that photo shows him five metres from the line, his brakes slammed hard on in cardiac horror.

Diego Ronchini won the 1959 maglia tricolore. He beat Angelo Conterno (and Adriano Zamboni) by a tyre-width.

He was a champion, that Diego Ronchini.

If you liked this story consider purchasing Soigneur Cycling Journal 18 where it was first printed.

When the regulations were relaxed to allow coloured shorts in the professional peloton, the designers at Carrera seized their opportunity. The ...