GUIDO MESSINA AND THE BOOM ECONOMICO…

They called them the Treni della Speranza, the “Trains of Hope”. They’d depart Ragusa and Palermo in the small hours, headed urgently and breathlessly north. The one out of Palermo would pick up at Messina, Cosenza, and Naples, the other at Taranto, Bari, and Foggia. At Rome they’d form a disorderly queue, and the first of them would heave into Turin Porta Nuova at 9:50. They’d be disgorged in their hundreds, and not one of them had any intention of going back.

They were the young, strong, hard-bodied men of the Mezzogiorno, and because they were here to stay they brought everything they had. Most of what they had was hunger and chaos, fear and yearning. FIAT were recruiting and they knew—because everyone in the south knew—that a job at FIAT was a job for life. A job, a chance, a life less ordinary… 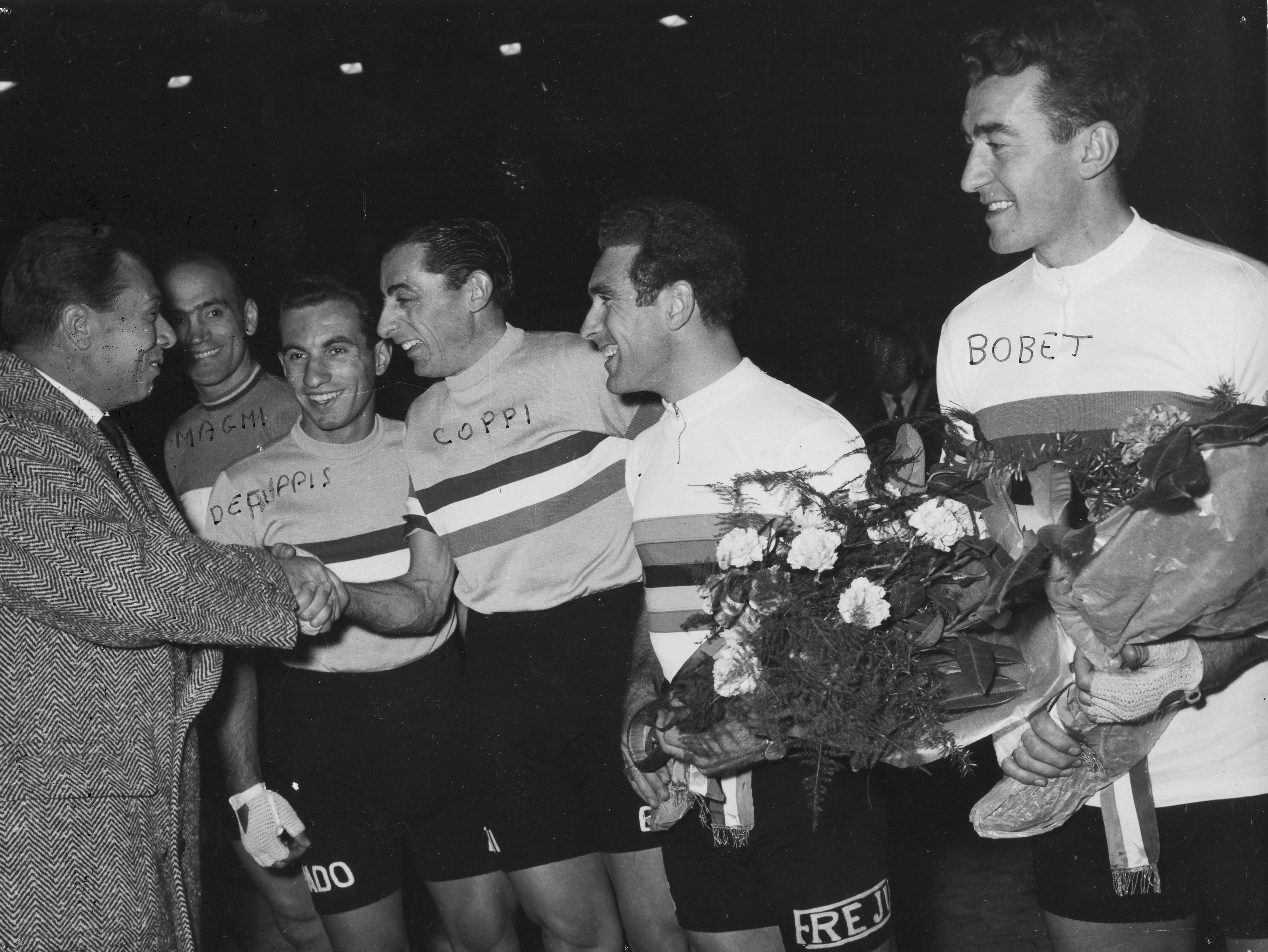 Sixteen-year-old Guido Messina came from Monreale, just inland from Palermo. He wasn’t much for hanging about, so he told his folks he was going to be catching the Treno della Speranza. There was a guy from the town who had a bike shop in Turin, and he’d sent him a letter. The guy, this Bruno, had sent one back, and so it was all settled. He’d work in the shop, the guy would put a roof over his head, and if he won some bike races he’d have money enough to feed himself. If he didn’t, he wouldn’t, but the bloke said he’d help him out with the train fare home. Guido said grazie mille but that wouldn’t be necessary, because there was no way in the world he’d be coming home. The bloke said, “That’s what they all say,” and Guido didn’t care. He packed all his stuff into an old cardboard suitcase, and that took all of about three minutes.

Bruno was as good as his word about putting a roof over his head. Guido had never lived in a loft, and he’d never known cold like they had in Turin. He’d never learned to stoop, but Bruno told him he ought to think himself lucky, because he’d a dozen kids like him wanting that loft. There were thousands sleeping in the back of trucks, and they’d fight, quite literally, for a bench in the waiting room at Porta Nuova.

Anyway, the loft, the cold, and the stoop were the best things that ever happened to Guido. They focused his mind on winning bike races. 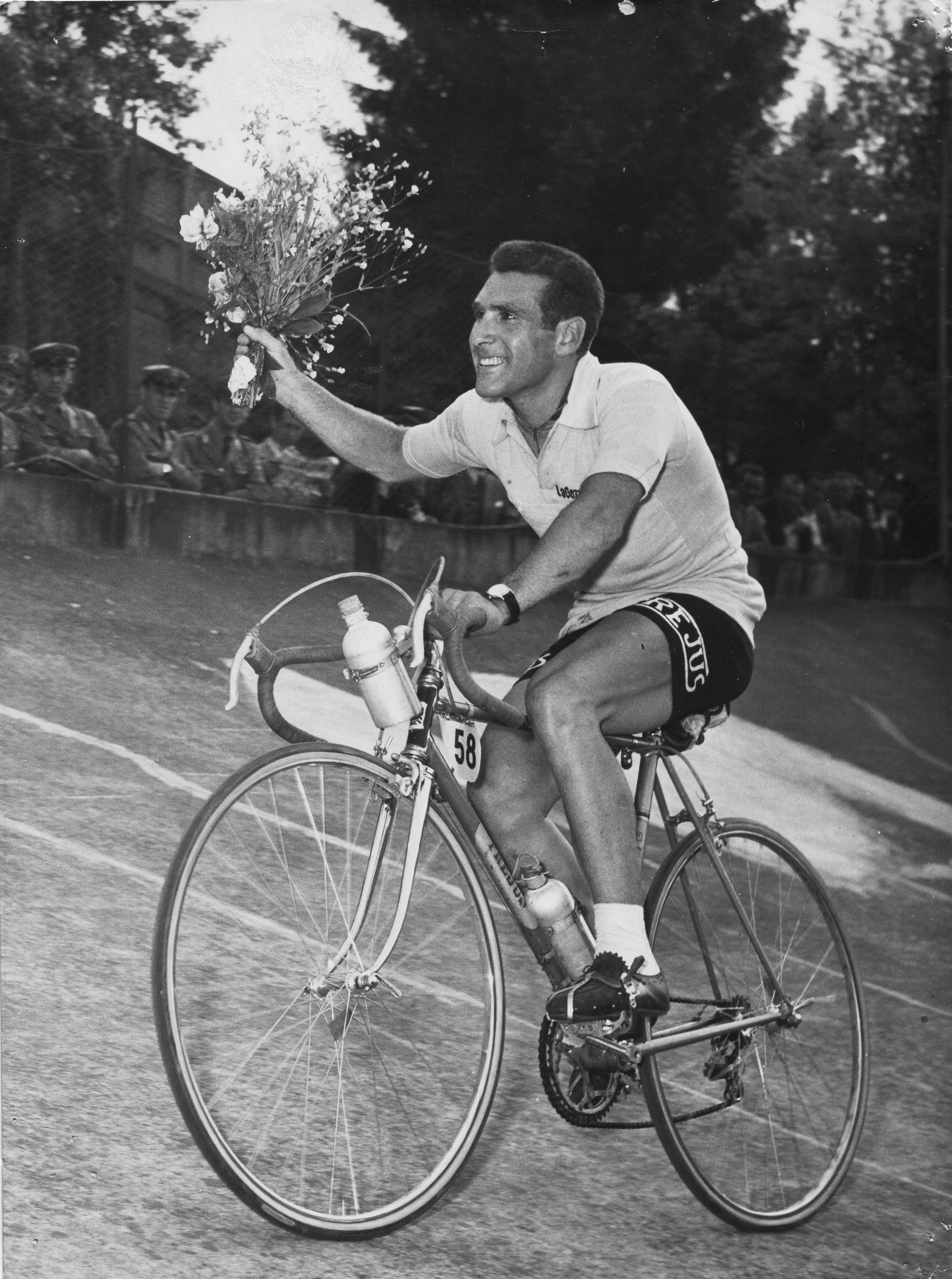 Pierino Bortolazzo had been World Amateur Road Race Champion in 1929, and he knew a rider when he saw one. He saw one in Messina, and he was managing the Azzurri now. He said, “How are you winning races on that old clunker?” and Guido said he did it by being first over the finishing line. Bortolazzo told him he’d sort him out with a track bike, because he was going to make a pursuiter out of him. Guido said, “What? Like Coppi?”, and Bortolazzo said yes, just like Coppi. Maybe. Sort of. Perhaps not quite like Coppi but…

Not quite was about right, because only one of them won a rainbow jersey in Amsterdam, and it wasn’t Fausto Coppi. He lost the professional final to Gerrit Schulte, but Guido Messina didn’t lose at all. He beat Vesely, De Boucklaere, and Glorieux, and then he walloped Coste in the semi-final. He went and beat Dupont next, and so, now aged 17, he had a rainbow jersey and a ceiling over his head.

By 1954, he had an Olympic gold medal, and he and Coppi each had a rainbow jersey. Fausto had won his on the road, and Germain Derycke, the bloke he’d been in the break with, had been out and bought himself a brand new motor car. Guido wanted one of those, so he told Bortolazzo he was getting a professional license. Bortolazzo got him a ride with Frejus, but the money wasn’t all that. It was 60,000 lire a month, rising to 120,000 if he won the worlds. Guido decided he’d best be winning the worlds, so he went to Porta Nuova and bought himself a (second-class) ticket. Turin to Cologne is quite a trip, but Guido didn’t mind that. He’d caught the train of hope from Palermo, and this was just more of the same. 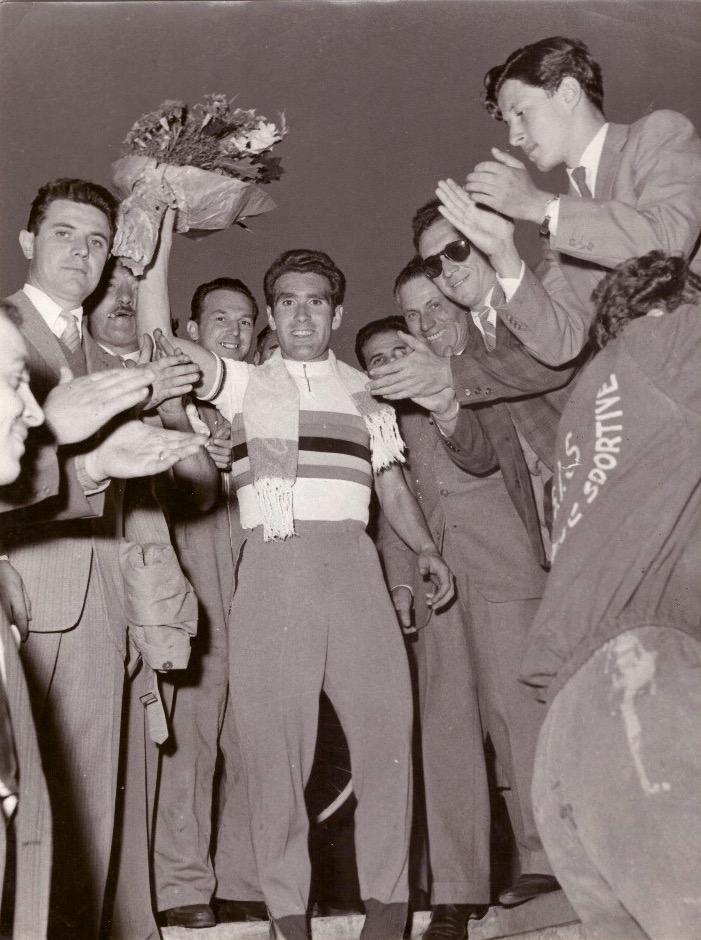 The problem was Koblet. He’d won the Tour and the Giro, and he always won the time trials. He’d beaten Fausto at the Gran Prix des Nations, and Guido’s best was sixth at Milan-Turin. You live in speranza though, and Guido beat Glorieux, Le Ber, and Nielsen on his way to the silver-medal final. The bookies were offering 1/3 against Hugo, and by lap three that seemed generous in the extreme. He’d 35 metres, then 50 and then, by lap five, 60 metres.

By the bell, he was almost level, and Hugo was thrashing about like a club rider. His side of the track was a wind tunnel, and Guido was a rapier. He beat Koblet—the great Koblet—by two-tenths of a second, and nobody had ever won the amateur and the professional titles before.  There were 20,000 in there, because that was cycling. It’s one hell of a din, 20,000 people in a space like that. 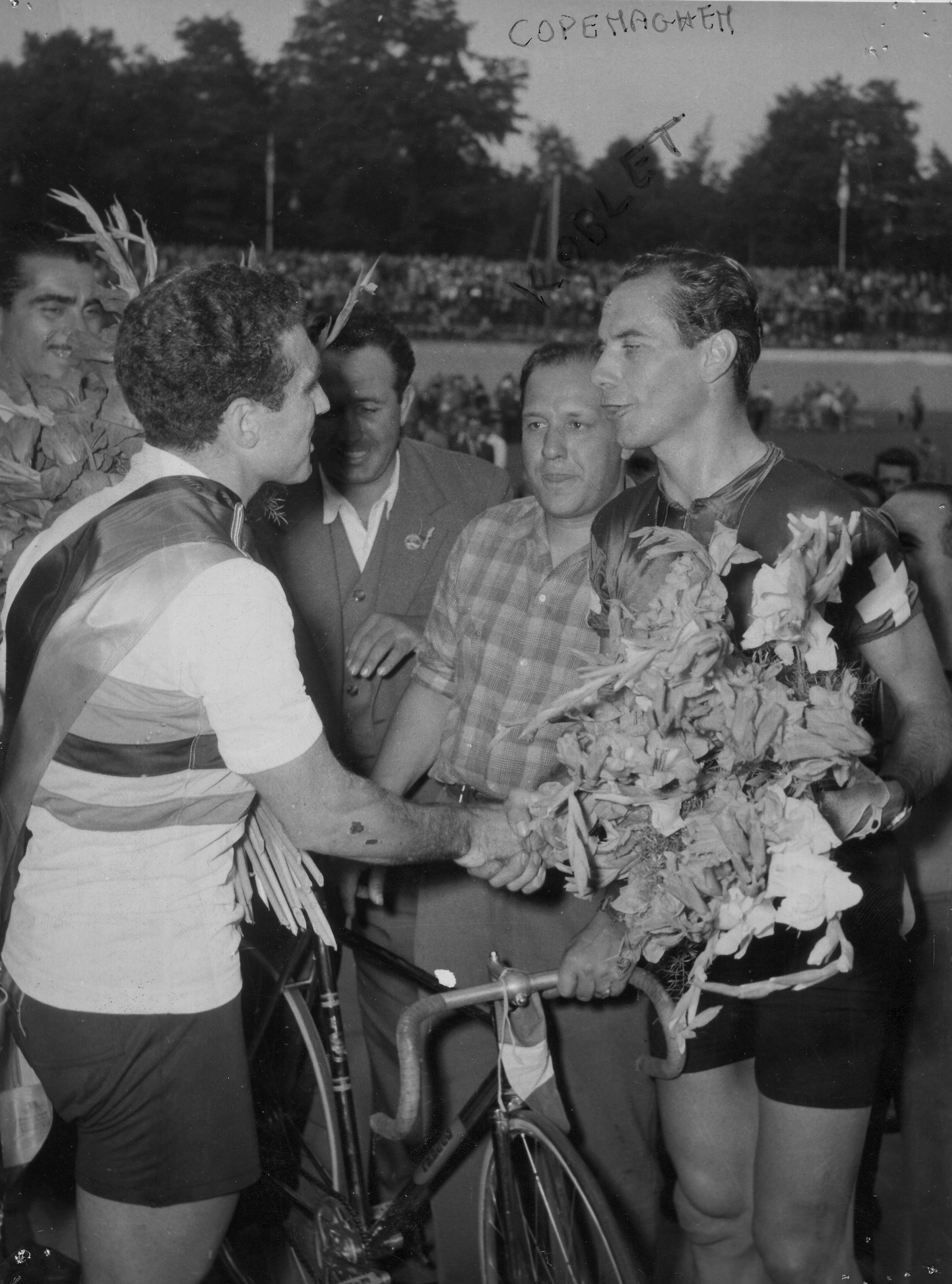 So Guido had another rainbow jersey, and he had his shiny new motor car. He had a day in pink at the Giro, and they said, “How on earth does a pursuiter guy like him get through the Dolomites and back to Milan?” Guido Messina knew how. He was paying rent every month, and it was dead money.

He beat Patterson, Van Est, and Strehler, so now he’d another maglia iridata. They said, “Yes, but he’s not beaten Coppi” and he said, “That’s right—I’ve not beaten Coppi, and you’ve not beaten anyone until you’ve beaten Coppi!”. He knew it wasn’t true, but that didn’t matter because he needed the money. So did Fausto, because the Dama Bianca spent it like nobody’s business. Fausto said he’d be interested if the purse was right, and that was what Guido had hoped he’d say.

Guido got round a few of his journalist pals, and so did Fausto. The best was Fossati. He wrote the best piece, because he understood cycling better than anyone. He wrote that it would be “The Challenge of the Century”; swashbuckling, cocksure young Messina versus the old maestro Coppi. That was the start of it, and day after day the tam-tam got bigger and bigger. It was beautiful. Like clockwork, so to speak.

Strumolo, the guy at the Vigorelli, suggested 9 October: a Sunday evening two weeks before Lombardy, as likely as not cool and dry. Guido and Fausto hummed and hawed, because that was the business they were in. They all waited and waited and then, right on cue, Strumolo came straight out with it. He said, “500,000 lire and 12 per cent of the take”, just like that.

Guido said that would do very nicely, because the flat he had his eye on would cost 1.5 million.

Bortolazzo dropped him off at Magenta, and he rode the last 60 kilometres to the Vigo’. When he got there, the gates were already locked, and there were 2000 on the grass in the middle. Strumolo told him he’d never seen anything like it. He said there were 5000 locked out, and the Dama Bianca seemed to like that. 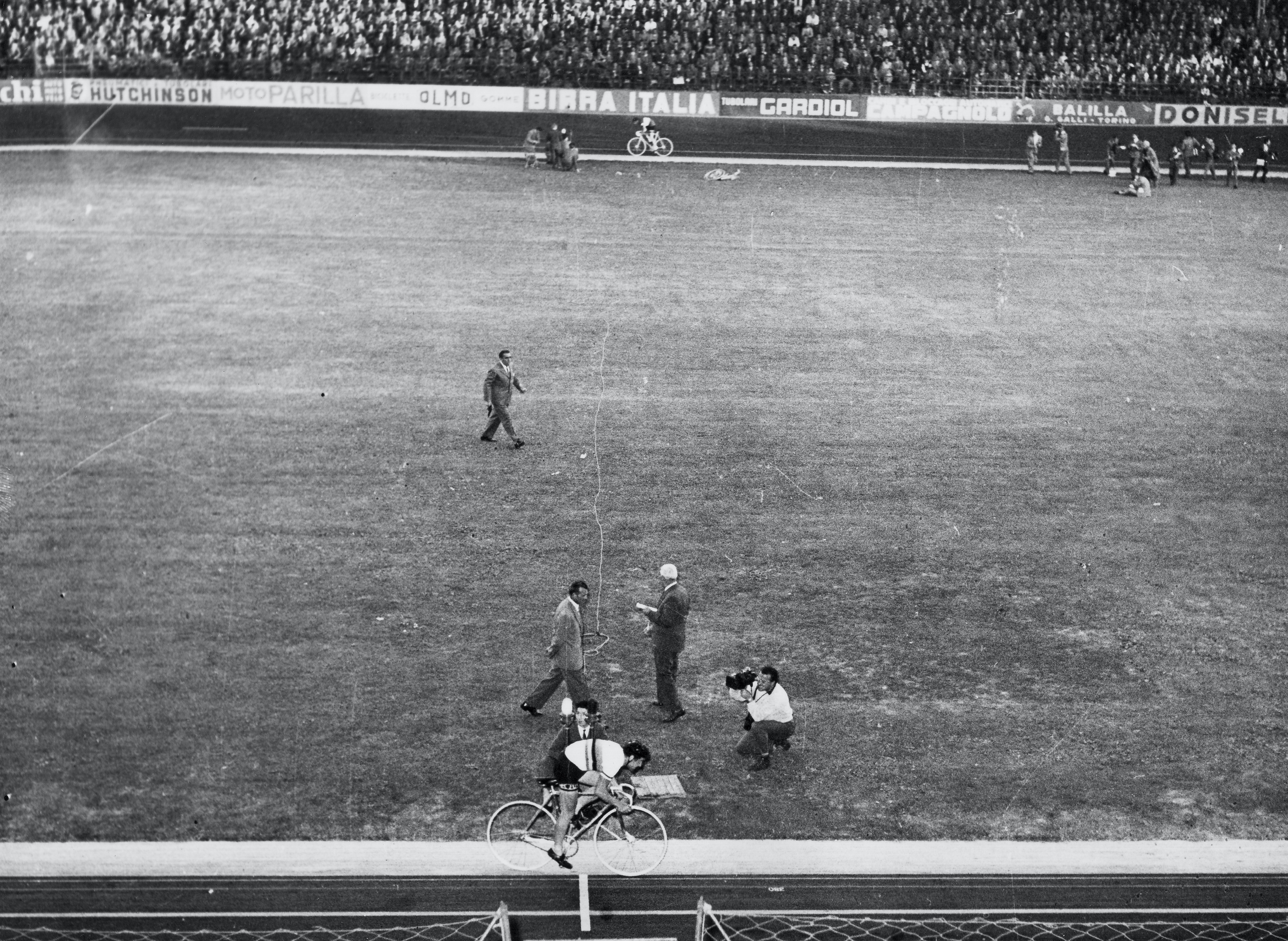