Tucked away in the foothills of the Bavarian Alps, an hour’s drive from the urban sprawl of Munich, lies the unassuming headquarters of GORE wear. Amidst a cluster of bland industrial complexes, this is where science and innovation have truly left their mark on cycling apparel. The dim silhouettes of the mountains in the distance are luring, but they will have to wait. “Most of us who bike to work are sure to make a little detour every morning or evening, as these surroundings are so impressive to commute through. More than a good workout, it also gives us ample opportunity to test our products,” states Patric Goerdes, product manager and one of many cycling aficionados at the brand. His job is to be the human interface between the wild imagination and capabilities of the product developers and the wishes of the marketeers, bringing the two together in the strongest possible end result.

Ever since the invention of GORE material in the late 1960s by Bob Gore himself, there has existed a fascination with the material and its possible appliances within a wide range of industries. The specific PTFE material the brand has been developing and evolving for almost 50 years has seen extensive use in the medical industry, used for example as stints for heart patients and artificial arteries. And while on one hand NASA has deemed the material fit for using as insulation, there have also been excursions into the market of simple PTFE wine corks. This ample field of appliances speaks volumes about the dedication of the GORE engineers to think forward and keep improving, with the help of advancing technology over the years. Yet it wasn’t until a famous mountaineer asked for an ultra-lightweight and waterproof tent that GORE started thinking about applying its knowledge and skills towards a more sportive market.

Having been supplying a lot of other — perhaps more well-known — brands with their materials over the years, the Gore company is dealing with a lot of clients that are both competition and client at the same time. For instance, the famous Gabba jacket was made possible with Gore’s technology. And while the company will keep supplying its ‘rivals’ with its state-of the-art technological fabrics, GORE Wear is now starting to acquire renown for its own apparel too. What started out in 1985 with the premiere of the rainproof Giro jacket, the aim nowaways is to keep pushing the limits of apparel technology, and keep evolving upon them. The GORE-TEX Shakedry technology is a good example of this, perfecting waterproof technology and breathability into a lightweight cycling jacket that had no equal at the time of its release — it was the non-plus-ultra of rain jackets. But as evolution runs thicker than blood in the veins of the company, GORE Wear has been improving on the jacket every year, not content to sit still and rest on its laurels.

Gore frequently crops up in ‘top-100 companies to work for’ lists, both in the States and Europe. They clearly value their employees, and aim to make the absolute most of their potential. There is a diverse mix at work within the corridors of the complex, from the sewing room to the weaving labs. People with backgrounds in chemistry, marketing, business and sports provide a telling mix to always keep moving the brand forward. The Gore family is still very much involved in the direction of the company. In the past, whenever departments across the world would gather to showcase new products, the family participated actively in the process of evaluation. The story goes that Bob Gore would not hesitate to swing on a jacket himself and test it by standing in the shower.

In the halls of the Feldkirchen offices meanwhile, testing is carried out too. From wind and waterproofness to washability and creaseresistance, an array of small and deceptively simple tests is carried out before new garments are prototyped by hand in the sewing room. In this small atelier, bolts of fabrics and rolls of thread forge an atmosphere where magical things can happen. Seamstress Regina has been deftly working the machines for many years now, working and bantering in close concert with designer Clemens Deilmann, who has an interesting history as fashion designer in Parisian haute-couture. Working in close vicinity to the catwalk, he is well versed in the know-how and crafts of how to transform the basic fabric material into well-fitting garments. As such, his skills are a unique asset to GORE Wear, and once more speak volumes of the wide range of expertise the brand employs in its operations.

The finished prototypes are then extensively tested at the complex’s rain tower facility, a structure especially built to a height that very accurately replicates the energy of falling raindrops. In there, an array of powerful sprinklers does its best to daily defy the garments’ waterproof proficiencies. Possible flaws soon come to light, after which it’s back to the designing offices for reiteration.

The sports heritage of the brand was certainly born in Europe, and derives primarily from the rich climbing and cycling traditions on the continent. Obviously there had to come a point where athletes would have quite enough of sticking newspaper underneath their clothing to keep warm, and someone would have to fill that void. So ever since the invention of GORE’s Giro Jacket in 1985, the brand has been synonymous with bad weather clothing. “This is a perception we have lately wanted to overcome,” tells PR manager Jürgen Kurapkat. “Science and innovation are at the heart of the company. And there has grown a lasting expectation from the cycling and running industries to keep evolving. Surely, we’re very proud to be on the forefront in the field of rain jackets and outerwear, but we aim to keep developing towards a broader line of apparel too. Bike and running wear that still stands out through leading edge technologies, but is not necessarily geared towards extreme weather conditions.”

This new approach has resulted in two remarkable, yet very different, collaborations. Originating by coincidence via a mutual friend, product marketing manager Patric Goerdes was asked by German cycling crew Rad Pack if GORE Wear could perhaps contribute some apparel for an upcoming ride in Iceland. Patric ended up not only furnishing some protection from the elements in the form of apparel, but also joining them on their northern escapade, thus establishing both a long-term partnership as well as a friendship, as Patric gleefully explains.

“They embody a different approach towards riding bikes. One of opening the mind, exploring new communities, as well as new ways of riding. Their commitment is not a trend, it is of lasting value, fitting perfectly within the GORE Wear agenda.” And as GORE Wear is evolving, the Rad Pack is evolving with them, from the demanding Tour de Friends multi-day rides to the exciting punk rock-like Rad Race events. “I’ve had some people come up to me saying they found it strange for us to be connected to an indoor cycling event. After all, weren’t we all about the outdoor cycling apparel? But for us, this is as much about the new experience and the opening up to different communities as it is about supporting these guys. It also serves as a way marker to the future roads that GORE Wear as a brand is travelling,” states Patric.

On the other side of the spectrum, the company has teamed up with one of the most famous faces of modern professional cycling after his retirement: former pro Fabian Cancellara. Accurate and precise to a fault, Fabian supplies the brand with invaluable advice concerning road bike apparel. The most prestigious fruit of this partnership has just been launched: a range of bibshorts standing out through the approach towards its design, all in very close cooperation with Fabian.

Rad Pack and Cancellara may well be extremes within the cycling community, but both in their own inimitable steadfast way exude the values GORE Wear represents; a trustworthy, authentic and dedicated experience of cycling.

Next year GORE Wear will release 3 new bibshorts based on the central torso architecture concept. The range is a result of months of close cooperation between product manager Jürgen Erd and Fabian Cancellara, and making the very best use of both internal and external skills and knowledge. The bib is revolutionary in its reversed-design process: the way that it is built up around the chamois, instead of adding that crucial part last, to what is in Fabian’s words “the most crucial part in a cyclist’s wardrobe.” The chamois itself, with its modernist angular corners, was specifically designed for the project by Elastic Interface. It is fitted not with a foam extension to the front, but with the GORE WINDSTOPPER Cup technology, a highly breathable, preformed windproof front, which insulates up to three times better than regular foam inserts. 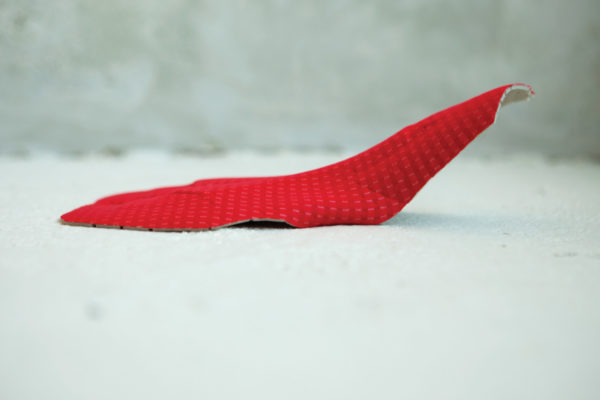 It was quite a journey to find the right material for these shorts to provide a perfect combination of stretch and compression. The woven material that was the result of this quest is lighter than knotted stretch material, while still retaining plenty of compression for an aggressive fit on the bike. Interestingly, the design of the fit itself was heavily influenced by the ‘draping’ of fabric around the body. This is as it happens at haute-couture catwalk shows, when designers quickly need to adept garments to perfect fit. This feature clearly shows designer Clemens Deilmann’s background.

As an important feature, and born from the experience of years and years in the saddle, Fabian requested as little seams in the shorts as possible, as they are potential culprits of skin irritation. Elaborate in-house experimentation on different sorts of seams resulted in shorts that have only one, going up the back of the leg. The ends are simply turned over and glued with a minimum of silicon grippers, as this special woven fabric does not allow for a laser-cut finish. Furthermore, Cancellara’s opinion about what a good bib should be were taken into account in the finishing of the product: no shiny fabrics and a bare minimum of visual branding were to be key in the looks of the shorts. That it could only be black, speaks for itself.

The time Fabian waved to me

Every time people ask me what my favourite Cancellara moment is — and it happens more often than you might think — I reply, the third stage of ...