Beth Hodge has spent much of the past year in Sichuan, where she has been working to establish the first Haute Route event in China. It has been an eye-opening, but very rewarding, experience for the Londoner. We asked her to write about the place that has challenged her legs, preconceptions, and taste buds.

__THURSDAY__ I’m sat in the back row of a six-person Buick people carrier, holding on for dear life and feeling very, very queasy. Our driver, squat, bald and round-bellied, is doing his level best to keep up with the sleek and speeding black Merc that is carrying the boss of the Dujiangyan Sports Bureau. That guy is the main man. He has the power to approve, or not, our proposal to bring our cycling race to his roads, including the running of a test event that is due to start in 24 hours. At this point in time, his roads happen to be very twisty and unforgiving on my stomach—great for riding, less so for being a back-seat passenger in a speeding car.

Thankfully, it’s lunch time, and, much like France, there are no quick pit stops here. We’re ushered down a small alley, and I’m placed in front of a steaming bowl of freshly made noodles. The Europeans sit at one table, and the Chinese team take one table, each to themselves. Lunch is taken seriously, and so it should be. My car sickness doesn’t give me much of an appetite, so I leave the noodles and take a stroll down the alleyway to get some air. It’s like being in an early 2000’s Michael Palin travel episode on China, but this is 2019. A few blocks away from the shiny, towering CBD and the eight-lane freeways, the bustle of the traditional Chinese daily routine hasn’t gone anywhere. Groups of pensioners huddle around too small tables playing Mahjong with the obligatory cigarettes hanging from the corners of their mouths. A gapped-tooth old man sits preparing some green vegetables, and a handful of small children stare at me from dark doorways. Tomorrow, we will welcome 20 guests to ride with us.

__YOU WORK IN CYCLING, IN CHINA?__ How’s that working out for you? Aren’t they trying to steal all our amazing Western ideas? Isn’t the riding awful?

Not exactly. How much time have you got? I could talk about it for days.

China is a country so large and so curiously chaotic in its mannerisms that it is entirely overwhelming. China to me is like the (proverbial, to be clear) eating of an elephant. You have to eat it slowly and in small pieces, sometimes taking a long time to chew each mouthful. Mindful eating. Mindful learning. Same, same. Take what’s in front of you and go morsel by morsel. Don’t try to understand it all in one go; you will fail. Even when you think you understand it, you’ll likely have misunderstood it and will need to start again.

Let’s start relatively simply in Sichuan, a colourful, largely rural province in the southwest of China. Take your left hand, palm facing toward you and fingers to the sky. Do a 45 degree turn of your wrist. Your fingers are pointing to the right. This is China in your hand. Your index finger is roughly where Beijing is. Your ring finger is Shanghai. Go due west from Shanghai and stop around three quarters in. The heel of your hand indicates the start of the Tibetean Plateau, where things start getting really wild. 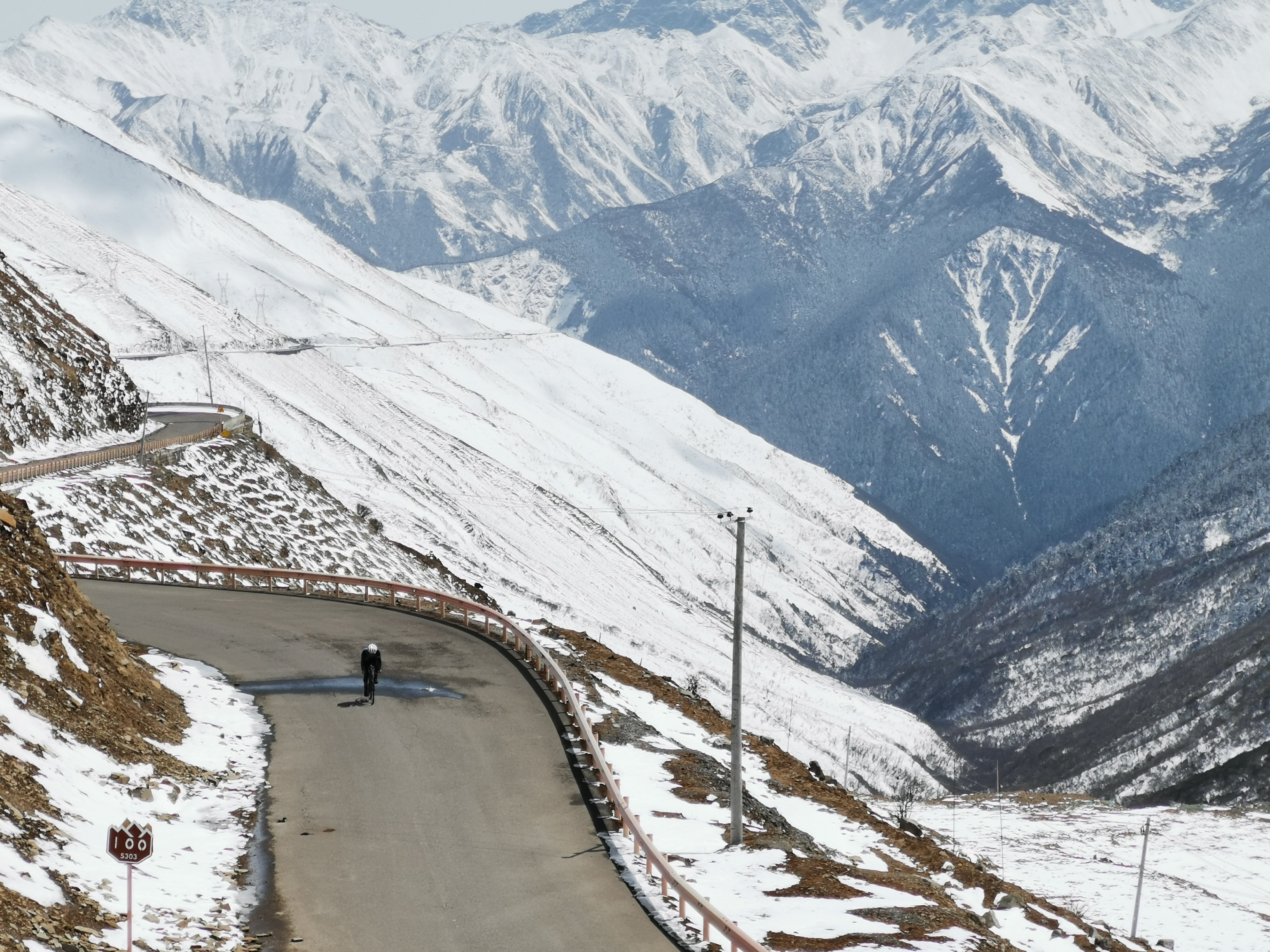 __FRIDAY__ The route has been approved, and Friday morning dawns, meaning that today we start to ride, a mixture of local riders and friends from Asia and Europe. It’s one of those grey October Tupperware days, when the lid is on super tight. We head out of the city, trying not to think too hard about the seemingly chaotic traffic rules and regulations, which soon start to make sense, as we relax into the continuous flow. The air feels fresh against my cheeks, as I climb a narrow, twisting mountain road that takes us away from the city. Just as you would see in the Alps, the low-hanging mist loiters over the valleys, but hangs on bamboo and gingko rather than oak and pine. Scruffy mishmash dogs hang out in the ditches, their untrusting eyes following our wheels as we pass. In and amongst these bamboo forests, we learn, are wild pandas, but not many; maybe less than 2,000 now are truly wild.

After riding, we go to a panda research base to see a few up close. It’s surreal. They are crying out to be petted, cuddled, Instagrammed. Cute panda paraphernalia greets you at every turn in this province. Taxis are donned with panda faces on their bonnets, and giant plastic pandas decorate intersections. Young women hang outside tourist attraction car parks, covered head to toe in synthetic highly flammable panda tat, occasionally getting shooed away by the police. 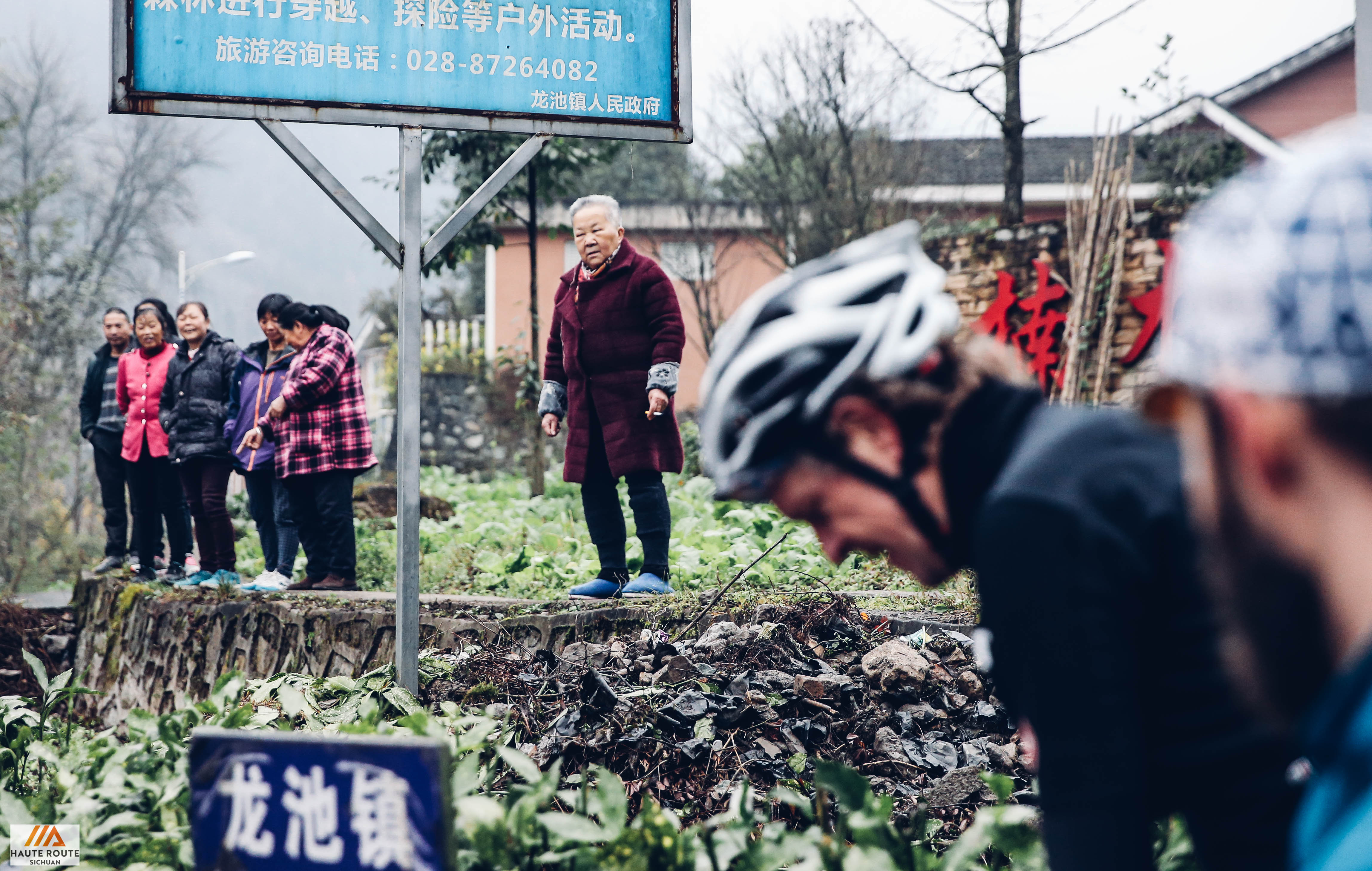 __TEMPERATURE TEST__ The climate in Sichuan can be extreme. The summer air becomes syrupy and filled with mosquitoes; winter air brings snow. The province can suffer from devastating earthquakes, and, each summer, roads get washed away by the rains. The not so small elephant in the room is the air quality, which can and should stop bike racing in its tracks. But go outside of the big cities, choose the seasons correctly, and everything is good. Professional bike races have been held in Sichuan for many years now, drawing thousands of cell phones and their owners to the roadsides. Locals are eager to be a part of the circus, even if they don’t really understand what is going on and why. On some occasions, they’re there because they were told to be. The Tour of China passes through the region some years, bringing with it the potential for further growth of the sport on many levels. Some industry players see it as a way to bring Chinese wealth to the West; others see it more as an opportunity to grow the culture domestically. For many years, China has looked outwards, and now, China is realising that what they have in this diverse and complex country is really quite unique. The lure of the shiny sophisticated West will always be there though. Chinese riders are now tapping into Zwift as a way to compare themselves against their Western counterparts for instance. 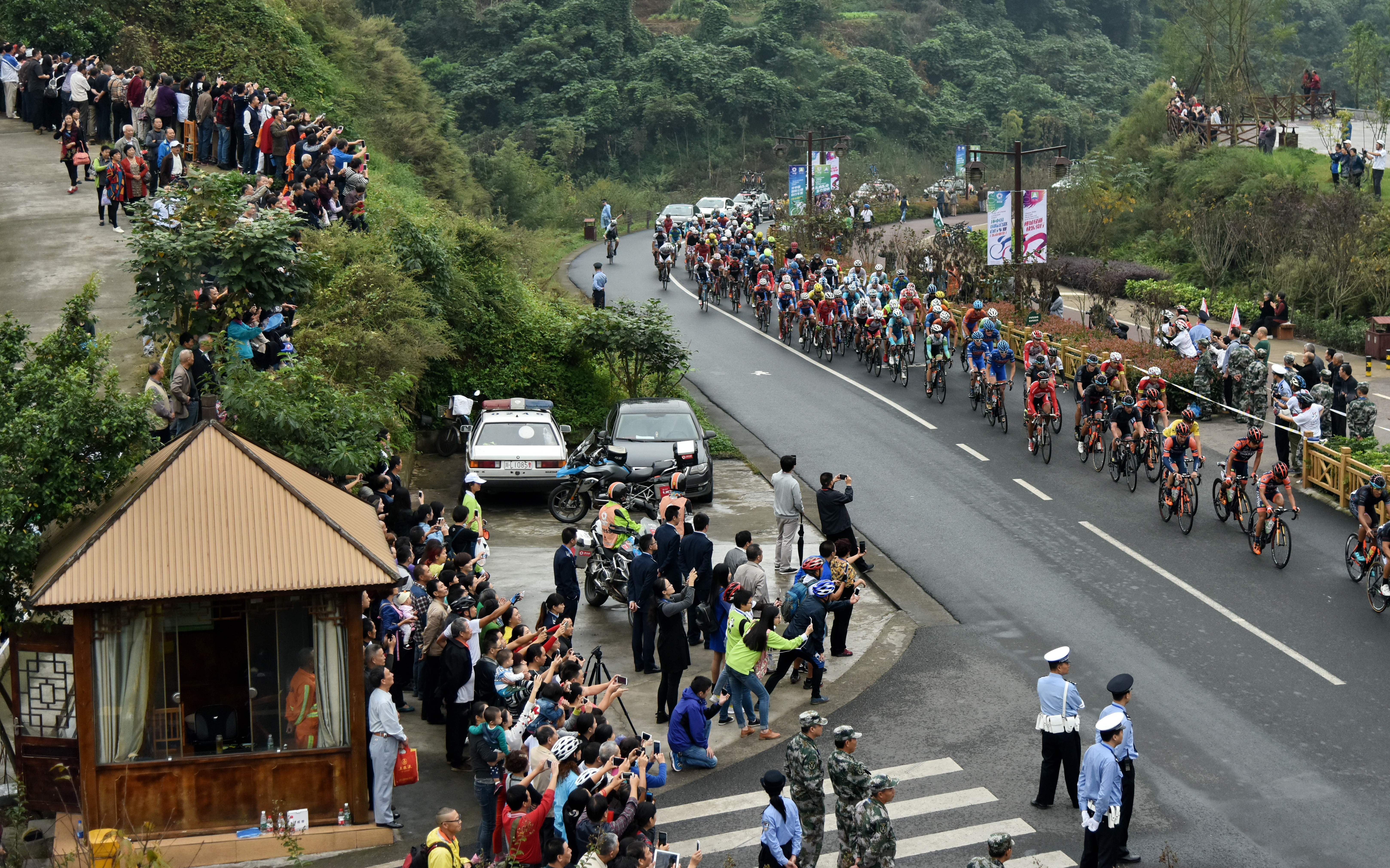 __SATURDAY__ Day two of riding, and the mood within the test-event camp is high. The stresses and strains of getting riders on the road for the first day have subsided, and our European race director’s face has a little more colour to it after a breakfast of green tea and congee. Today, we will ride up into the high foothills, past farmsteads and small villages, where we will be greeted by small children who will peer out from underneath blunt haircuts and proud women who will offer beautiful displays of their freshest fruit.  The local people here are resilient, hardy, curious. They stand outside of their houses, watching our lycra-clad circus roll through their sleepy town. I feel like I am being constantly and unashamedly filmed. Promotion is promotion, I suppose. Becoming a celebrity in China is OK with me.

The pace quickens, as we reach the end of the route, riders challenging each other to go faster and race to the end on quiet, perfectly tarmacked roads. 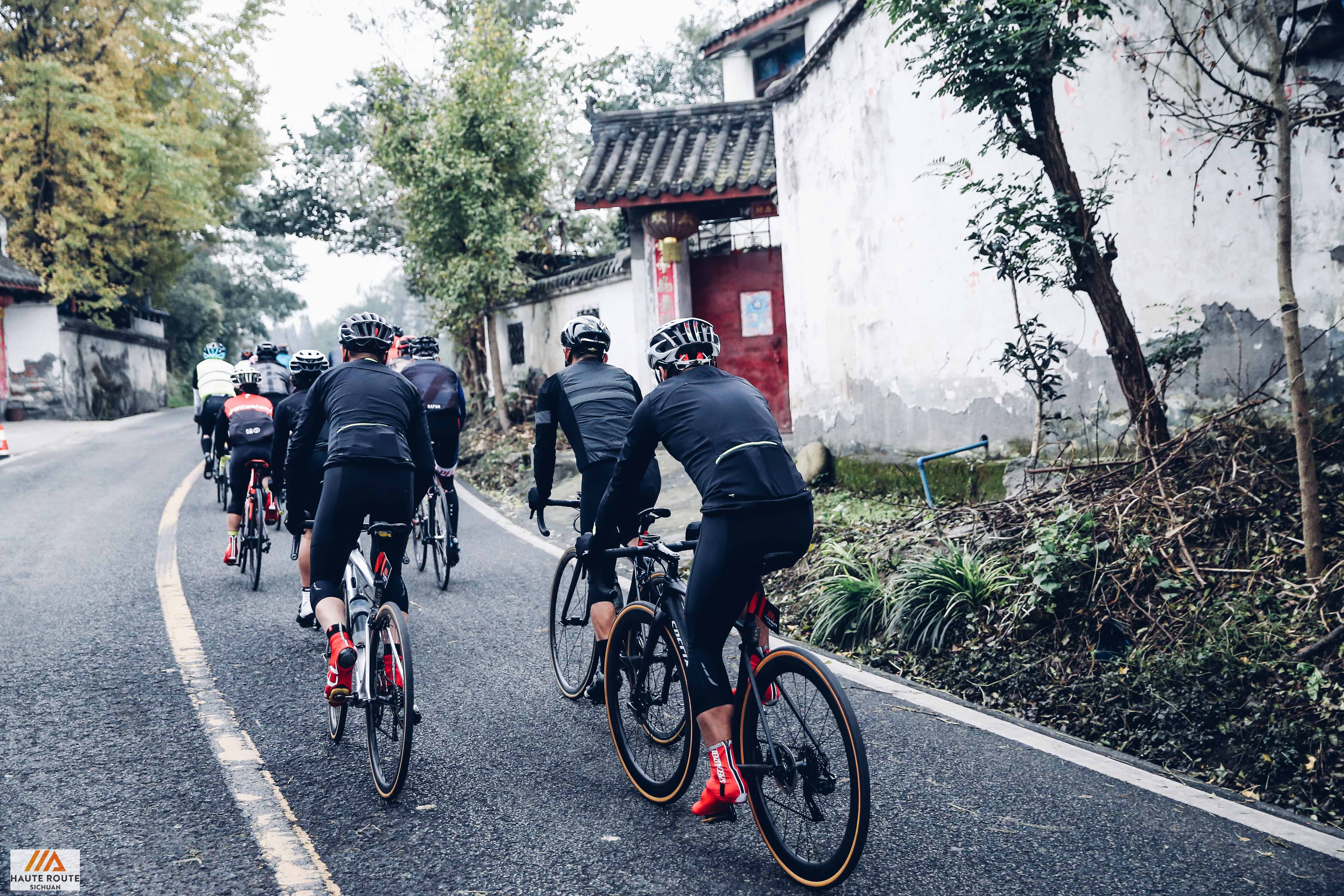 __YOU EAT WHAT IN CHINA?__ A few hours later, we’re sat in front of the ‘anything goes’ traditional Sichuan hot-pot dinner. The Westerners converge in one booth, the locals in the booth next door. We are presented with a number of dishes that pile up on the table around the bubbling vat of red broth and, at first cautiously, place the items into the fiery oil. An hour and several beers later, disregard is given to caution and manners, as various foodstuffs are thrown in and fished out some minutes later. We’re feeling pretty adventurous in our cosy booth, until we are welcomed into the booth next door to see the real deal, where everything goes. Well, at least nothing is wasted. A batch of hot banana and sugar pancakes are delivered to polish off the entire experience, and ruddy-cheeked we spill out into the night air, careful to avoid the steady stream of electric scooters and city bikes that rush past. 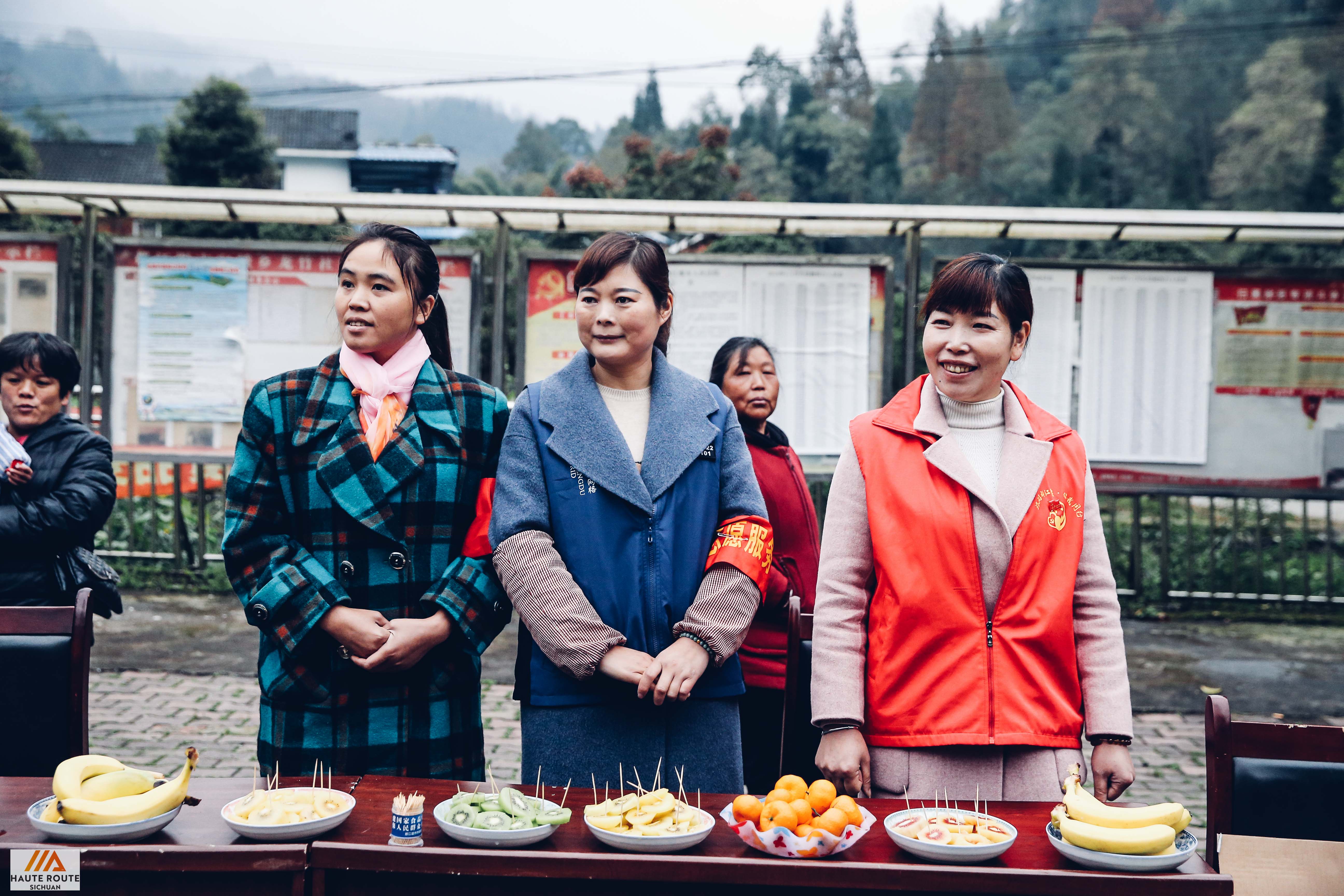 __SUNDAY__ The lid of the Tupperware has finally been prised off, and a bluebird sky makes the green mountain above us pop like Watopia. Strava tells us (yes, it works here) that the Puhong road is a popular segment. We’ve set up our time-trial rig at the bottom of the climb, and eager volunteers wait at the top with some water and food. Our Chinese guests are excited; time trials are popular here, and, like everywhere else in the world, make each rider feel a little bit more ‘pro’.

This road pass was only recently sealed. Before that, it was just a dirt track, hardly used, but became a critical route of survival for trapped villagers following the Great Sichuan Earthquake, which took nearly 70,000 lives. It’s a beautiful, quiet climb, and the valley of Dujiangyan opens up the higher you go. When I return to do a route check in December, the snow at the top is heavy with ice, and the hoarfrost is impressive.

Back at the TT start, we each get a number on a piece of paper and await our turn. Language barriers no longer exist after three days of riding together.  We are all focused on exactly the same thing. This is the best part about cycling in China. The language of the bicycle.

On my bike in China, I feel welcome. It’s a vehicle for exploring new friendships that open the mind. An implement so simple as some tubes and two wheels can be a conversation starter, a tool that crosses borders, an implement that brings joy, love, money, inspiration, debt, speed, adventure, friendships and health. There’s no time for East vs West here; we’re too busy turning the pedals. 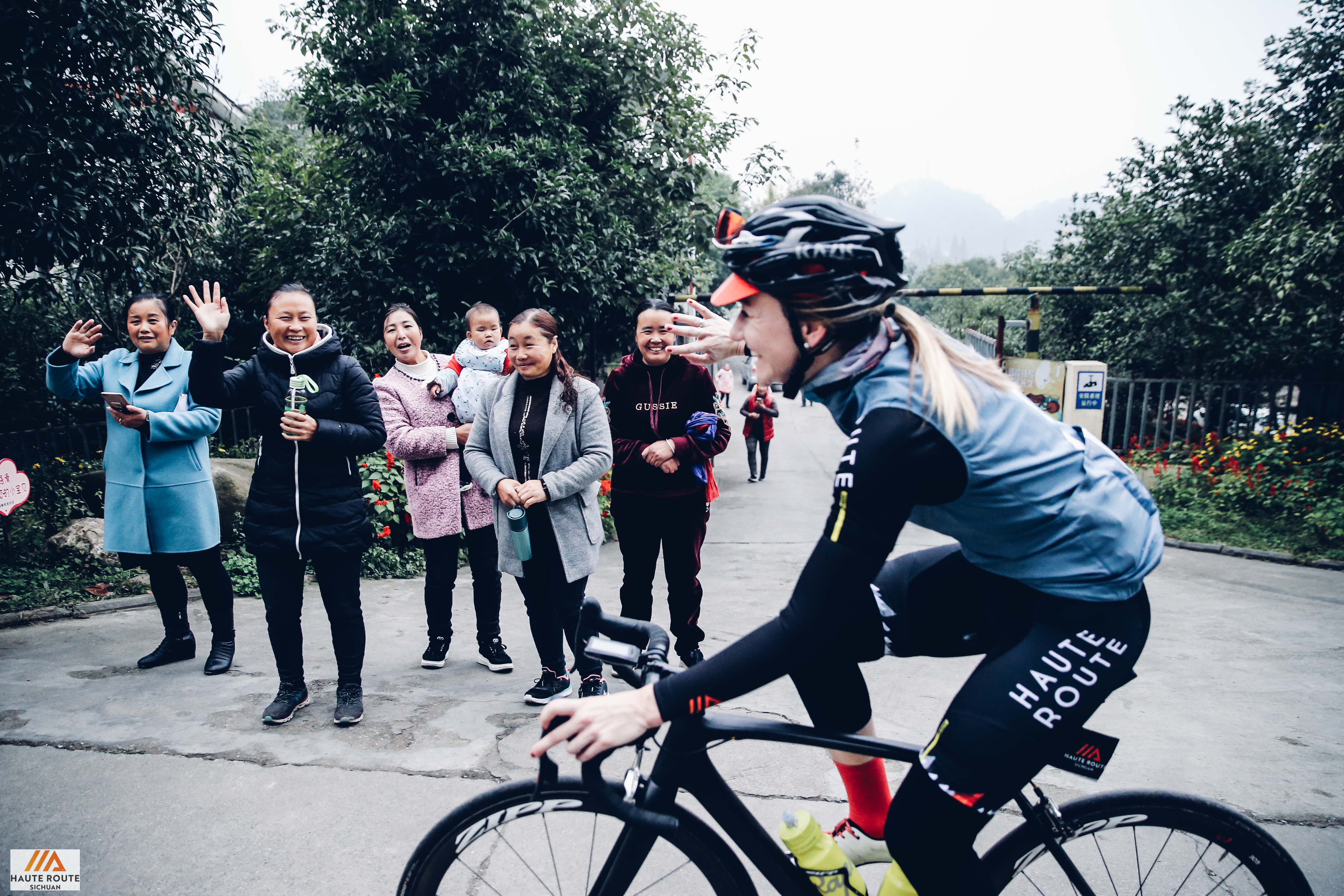