We rattled down the cobblestone streets in the half light, our free hubs whirring, as we dodged around delivery vans and groups of students. My shoulders tensed to stop myself from shivering, as I savoured the sweet, bitter warmth of my last coffee. Overhead, flags and banners flapped. Strings of lights flickered over the alleyways.

As we passed the last news stand and turned to sprint over the river Onyar, I glanced back through the fog, just as the sun rose over the cathedral’s spire. Girona lit up—all red, blue, and yellow. What a colourful jumble of people and buildings.

Our plan for the day was to ride the Hincapie Loop, a local favourite first set out by Lance Armstrong’s former domestique and training partner, George Hincapie. 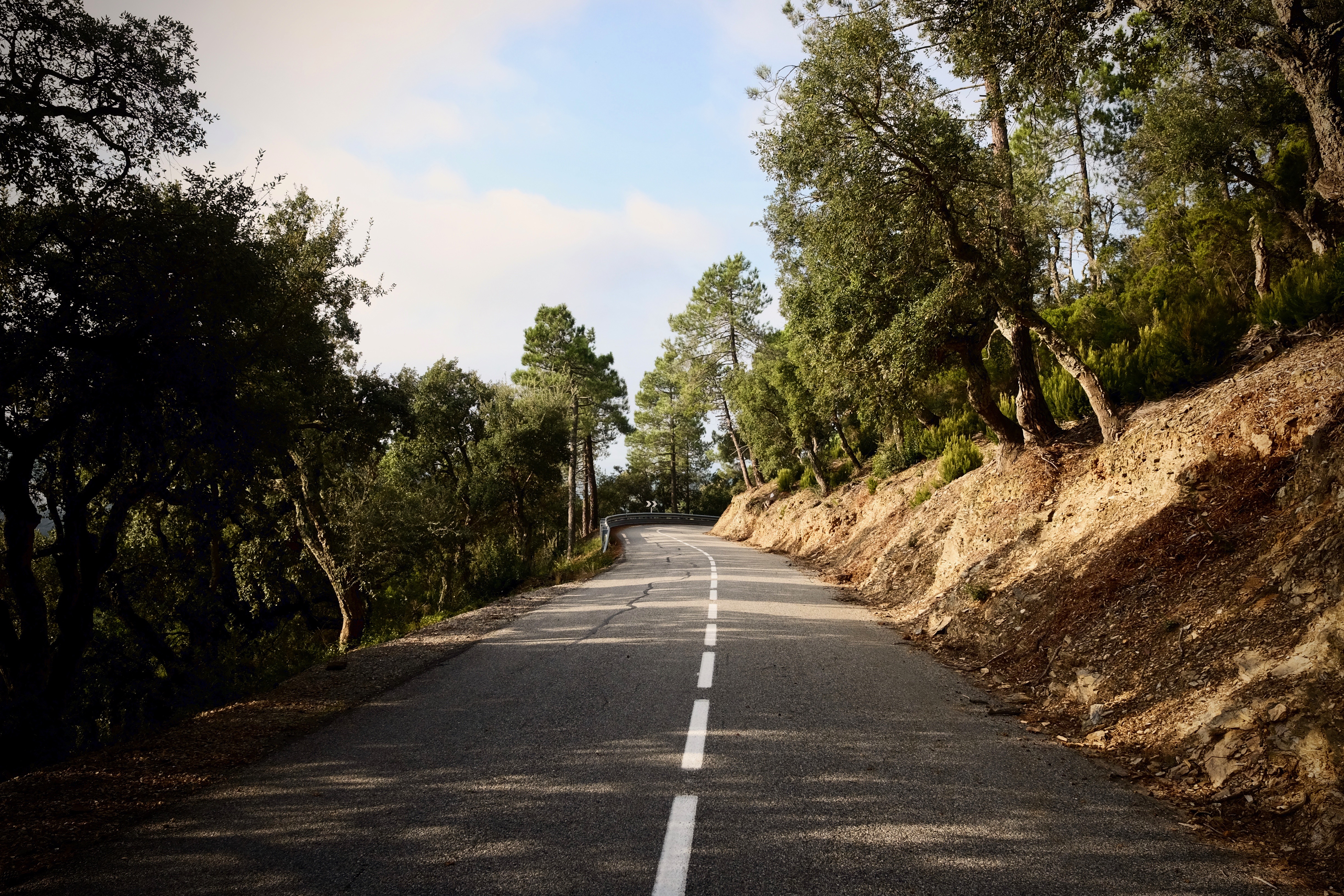 Hincapie, Armstrong, Tyler Hamilton, Levi Leipheimer, Tom Danielson, Floyd Landis—nearly all of US Postal’s American contingent moved to Girona in the early 2000s, drawn to the Catalan university city’s easy way of life, hundreds and hundreds of kilometres of smooth, hilly roads, proximity to the mountains, mild climate, local airport, and Spain’s (then) lax doping laws. It has since become a hub for professional cyclists. Nearly 90 top-class riders live in the city, and plenty more visit. You will see them in its bike shops and cafés and out on the road, racing past you.

After a couple of kilometres of single-file riding on a busy highway, we found the roundabout we were looking for and the start of the first climb: Els Angels. The guys attacked it. My heart whacked against my chest, as I tried to gulp enough oxygen, and stood and sat and stood and sat and tried to turn the pedals over quickly enough to stay on their wheels. My sleepy mood shattered. Salty, winy sweat poured down my cheeks and onto my handlebars. My body just wasn’t ready to work through the epicurean adventure I had finished a few hours before. The guys had no time to ease into a rhythm. They were going for Strava records. Personal ones that is.

For Els Angels is the climb where local pros test their fitness, and the KOM is as hard-fought-for as a victory in a minor tour’s mountain stage. If you crack the top 100, you are doing damn well. If you don’t bother about all that, it’s a beautiful road. Never very steep, with wide sweeping corners and a few rollers midway, it soars through a pine forest for ten kilometres to a monastery, where you can see out over all the green hills. 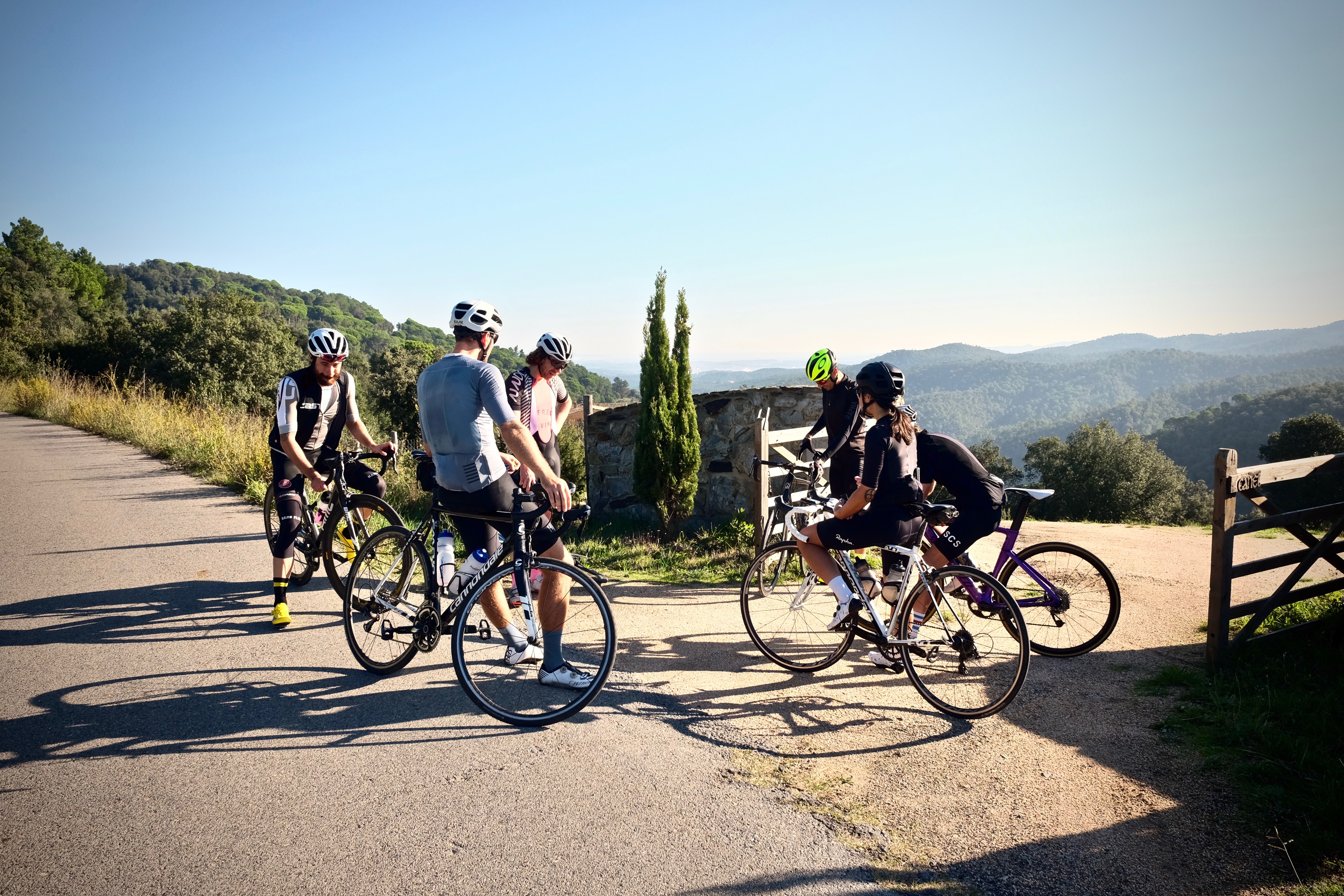 Hidden in those hills are the roads that make the region a cycling playground. They roll and twist in and out of the trees, crossing fast-moving rivers and circling lakes, passing every once in a while through a village where nothing ever seems to be open but the odd petrol station or ramshackle bar.

To the east lies the Costa Brava, with its scrubby, ochre knolls and views out over the blue, blue sea. To the north and the west are the Pyrenees. The high mountains of the range are within riding distance. But proper climbs can be found much closer afield.

Perhaps the most famous is Rocacorba. Neither so steep nor so long nor so beautiful as the grand tours’ grandest climbs, it is nevertheless steep and long and beautiful and just about an hour’s ride from the old town of Girona, which is why it is is one of the pros’ best-loved training grounds. Before their most important races, they will try to get up its gritty pitches in less than half an hour. However fast you go, the views from the top are worth it, as is the way down.

There are dozens and dozens of lesser known ascents in the region too. You could spend months—even years—exploring the terrain around Girona.

Our route took us down a swooping, perfectly pitched descent, through the mediaeval-walled towns of Madrenya and Monells, to the base of the Santa Pellaia, better known as the Hincapie climb, which rises at a gentle, steady gradient for six kilometres. The sun was out. A warm breeze ruffled the leaves and brushed the open fields. We stuck together. My legs started to feel better. The way down was fun. All that was left then was an easy jaunt over quiet, country roads back to lunch in Girona.

From the simplest sandwich—crusty bread smeared with tomato and olive oil with Iberian ham and Manchego—to roasted chestnuts from the stands on the Plaça de la Independència to fine meals at the city’s most renowned restaurants, the food in Girona is best suited to hard days of riding. Rarely pretentious, it comes in portions so generous they would satisfy the hardiest farm hand or domestique. The wine is good and cheap.

After an hour with my family at the table, I went for a wander around the city’s old walls.

A sunny haze hung over the tiled rooftops and yellow-stone buildings. The cathedral soared skywards. People walked from shop to shop below. They hurried to appointments, wandered into museums. A couple of pretty girls were reading their books on a bench.

The clinking of cutlery and tinkling of glasses floated up through the silence. 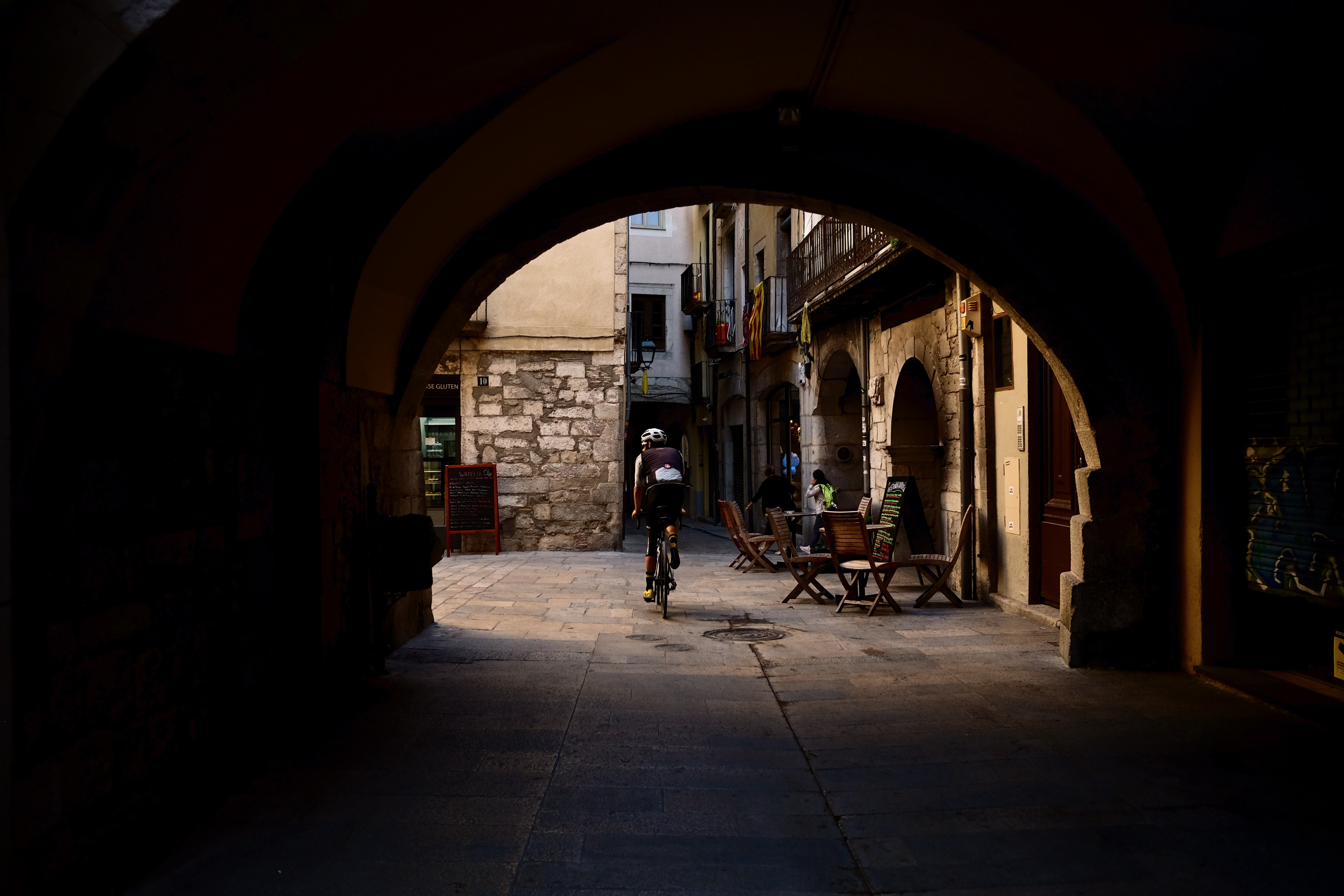