Tilting the 2020 Tour
How in-race motorcycles influence cycling races, and what to do about it
Stories 0 min

I have become so inured to faux-heritage brands that I was sure there would at least be a brasserie where I could get a good lunch and go for a tour of the brewery, but the grounds of the Abbaye Notre-Dame de Saint-Rémy were silent, save for the swoosh of the monks’ habits, shuffling round the gardens, and the occasional chiming of bells. A few dozen cases of Rochefort were stacked neatly behind a gate in a yard by the entrance. Otherwise, there was no sign that this was one of the most revered breweries in the world.

Rochefort, the nearby town after which the beer is named, is situated in the centre of Wallonie, the French-speaking part of Belgium. A bustling old tourist town that has seen better days, it is full of cafés and shops that sell its eponymous beers. To its south lie the Ardennes, a range of forested hills that spread over the border into France and Germany. My plan was to ride to Orval, in the far south of the country, before heading west to Chimay and returning back to Rochefort. The roughly 300-km loop I’d sketched out would thus take me to each of the Trappist beer-brewing abbeys in the Ardennes. Over the course of a weekend, it would be just hard enough to build up my appetite for the boozy lunches and dinners that were already wafting through my imagination.

Perhaps, I’d ridden past Our Lady of Banneux in the forest’s north too many times and filled my bidons with ‘holy’ water from the fountains, amidst all the tourists, who shuffled in and out of shabby shops filled with Catholic kitsch, and stale incense and fumes from the frites stand. In any case, I was a little doubtful about the monks’ religious devotion, reckoning that they were as likely as anyone to have been corrupted by such earthly delights as drink and money. Their beers were after all worthy of veneration. 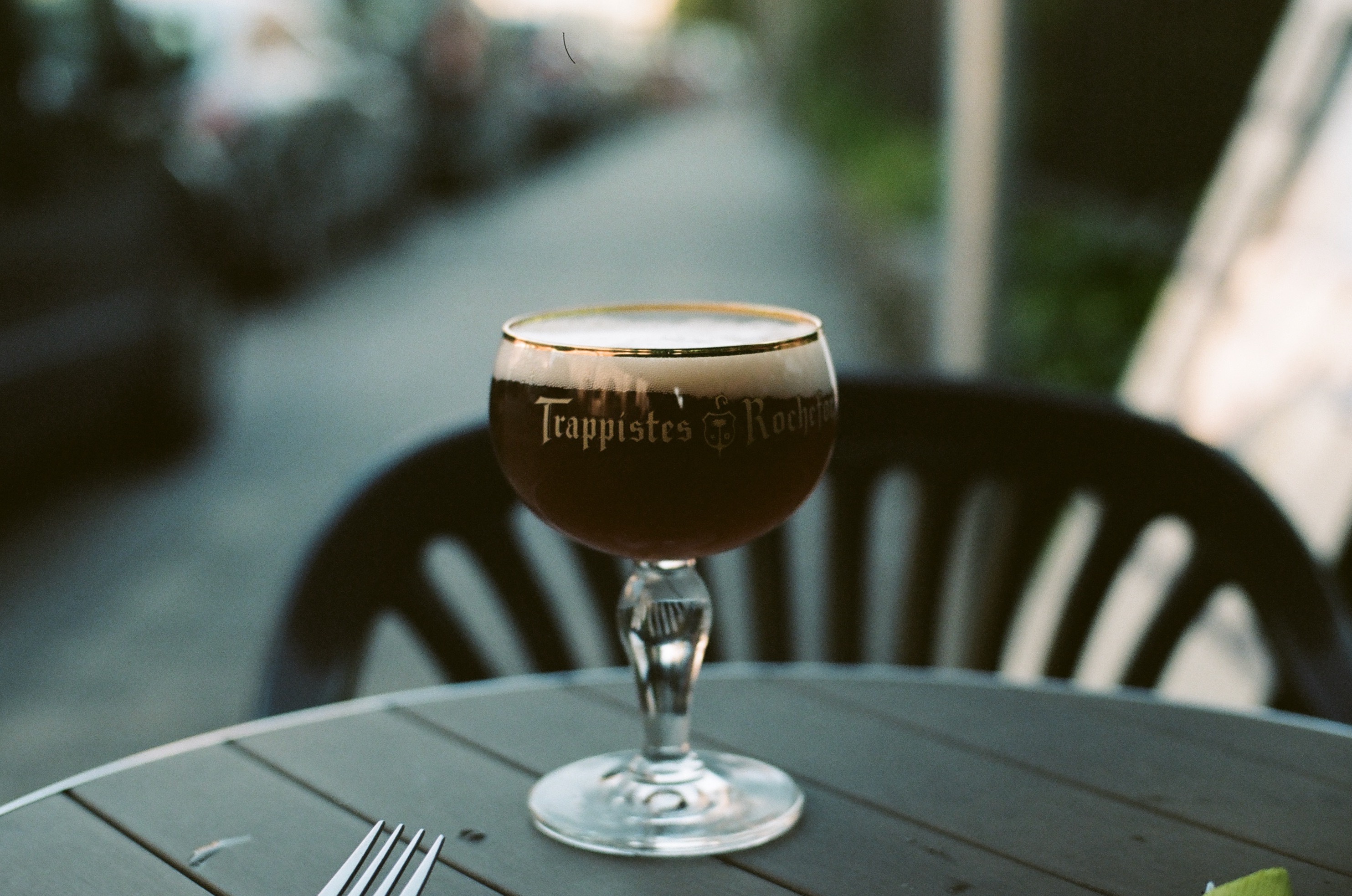 Dark or amber gold, rich or dry and bitter, always strong and headily fragrant—the beers brewed by Belgium’s Cistercian monks were, to my amateur palette, the best out there. The stories about their provenance—well, they added to the charm. Even I liked to pretend to believe in them.

So, I was surprised when the Abbaye Notre-Dame de Saint-Rémy turned out to be an abbey.

Without time for lunch then, I set off into the forest.

Over the next 80 kilometres, I saw one open café. The southern Ardennes are far vaster and more remote than I’d expected. Perfectly paved roads cut through the pines. Every so often, I came across a small cemetery containing a couple of hundred white crosses. French, German, British, American—they made my self-inflicted struggles on the hills seem so petty. I was starving. And there was nowhere to get food. In the boarded-up villages I did pass, nothing was open.

Otherwise, there was bush.

Finally, I arrived in the thick woods surrounding the Abbaye d’Orval, feeling very hungry, humbled, and foolish. As I descended through the trees, the sight of the abbey took my breath away. Whereas the abbey in Rochefort was rebuilt at the end of the 19th century after the 13th-century original was destroyed during the French Revolution, the Abbaye d’Orval dates back to the 12th century and, though it too was destroyed, retains its original ruins.The late-afternoon sun turned the overgrown walls orangey gold.

This time, I found a small café down the road. I leant my bike against the wall and collapsed into a chair. A beautiful girl brought me the menu. To hell with it, I thought, though I still had 40 kilometres to ride before nightfall. I ordered a sandwich and an Orval. 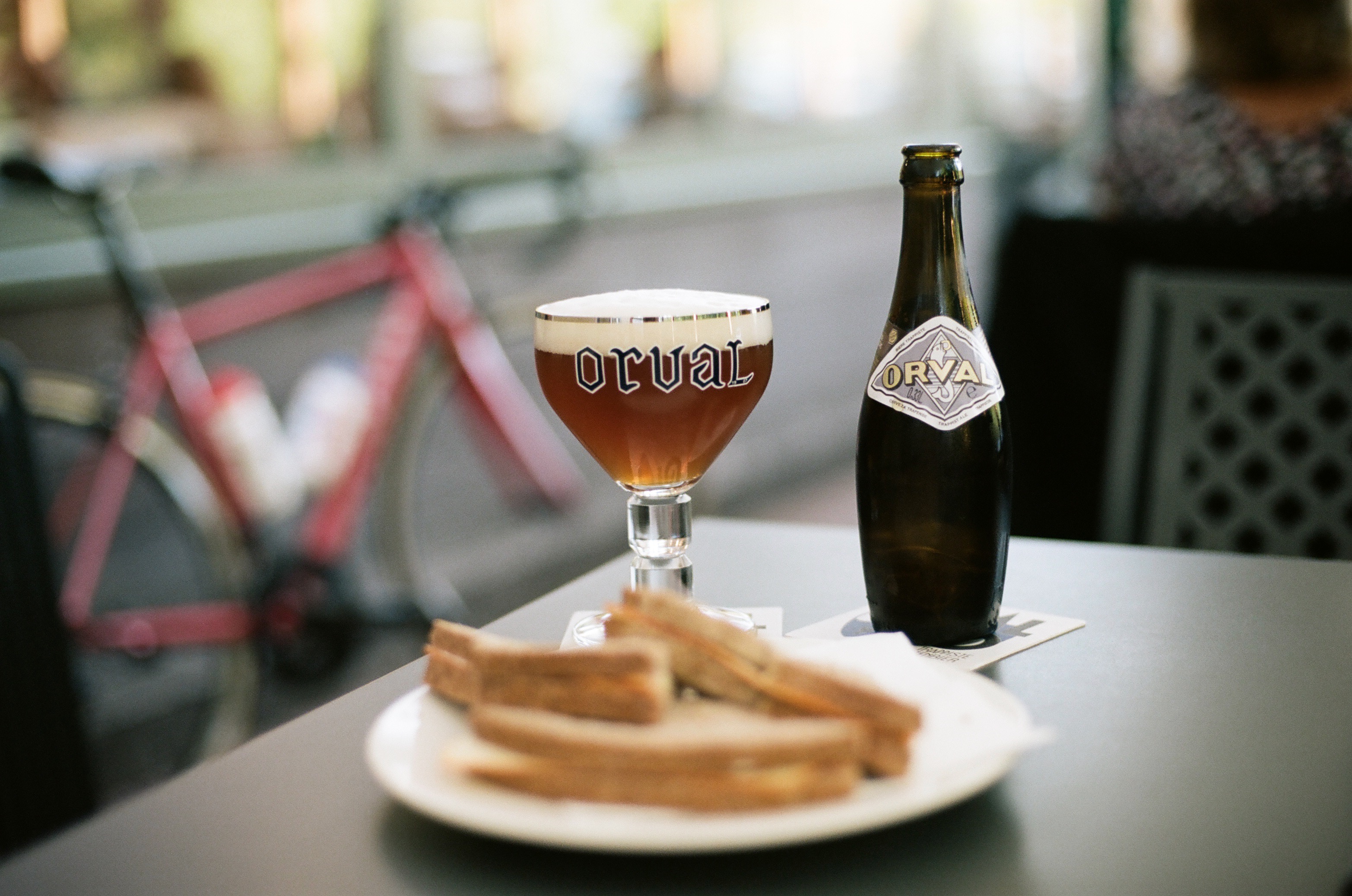 Crunchy brown bread, a bit of butter, and nutty, creamy cheese, washed down with cold, yeasty and bitter beer—it was better than Christmas dinner. In a couple of minutes, my spirits were restored. I got back on my bike half drunk.

The climb away from the abbey washed my bloodstream.

The last hour, I rode on a quiet, wooded lane along the French border. Save for the whirr of my chain and the odd ruffle of leaves, it was dead silent. The sun set. I heard a rustle in the bushes and saw two deer bound into the meadowy twilight.

Just before it really got dark, I hurtled down a long descent to the Semois and found the inn in Bohan where I’d arranged to stay for the night. Exhausted, I had another Orval at dinner and fell fast asleep.

I woke at daybreak, still feeling a bit sore, and had a quick breakfast. This time, I actually wanted to have time for a good lunch in Chimay.

After slogging along the Semois, and then following the post-industrial Meuse through France and back into Belgium, I got turned around twice in the middle of bush, before making it to the abbey.

Besides a café a few kilometres up the road, there was no sign that beer was made within its tidy walls. Monks wandered slowly through yards, tending pristine flowerbeds and smiling at visitors, without saying a word.

So much for my decadent adventure.

I rode to the next town and had another cheese sandwich and a beer, before getting going. 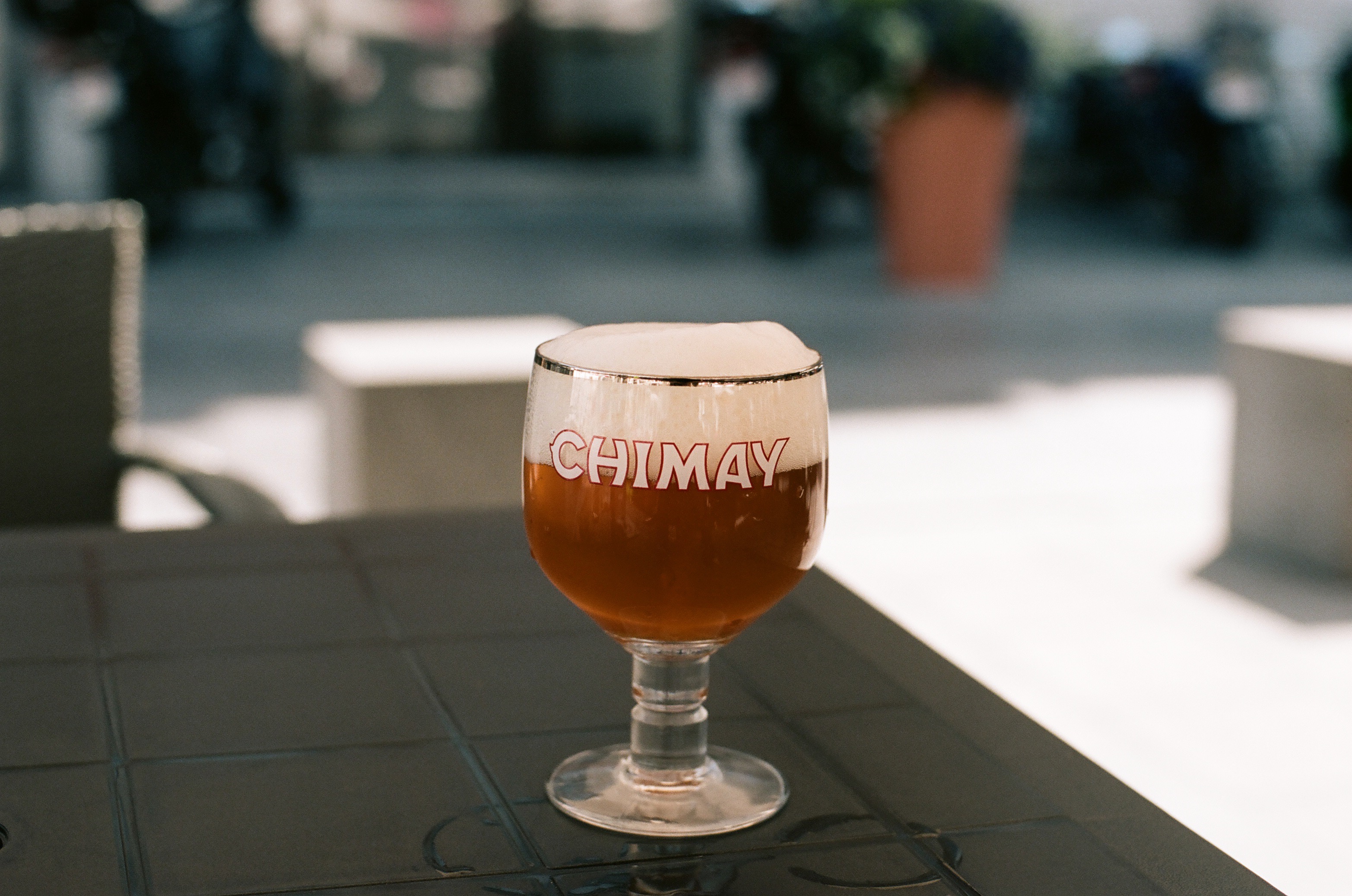 It was hot and I was exhausted. Toiling up and down through the old mining towns in the Viroinval was like riding into a blast furnace.

I got to Rochefort. No one was around at the abbey, but one man adding a few crates to the stack with a fork lift.

The monks really do make only enough to keep the abbey running and donate some to charity. Theirs is a life of hard work and discipline. Curvata Resurgo is their motto—“Bent, I stand up again.”

It was reassuring to know that they do what they say they do.

Their beer tastes better that way. 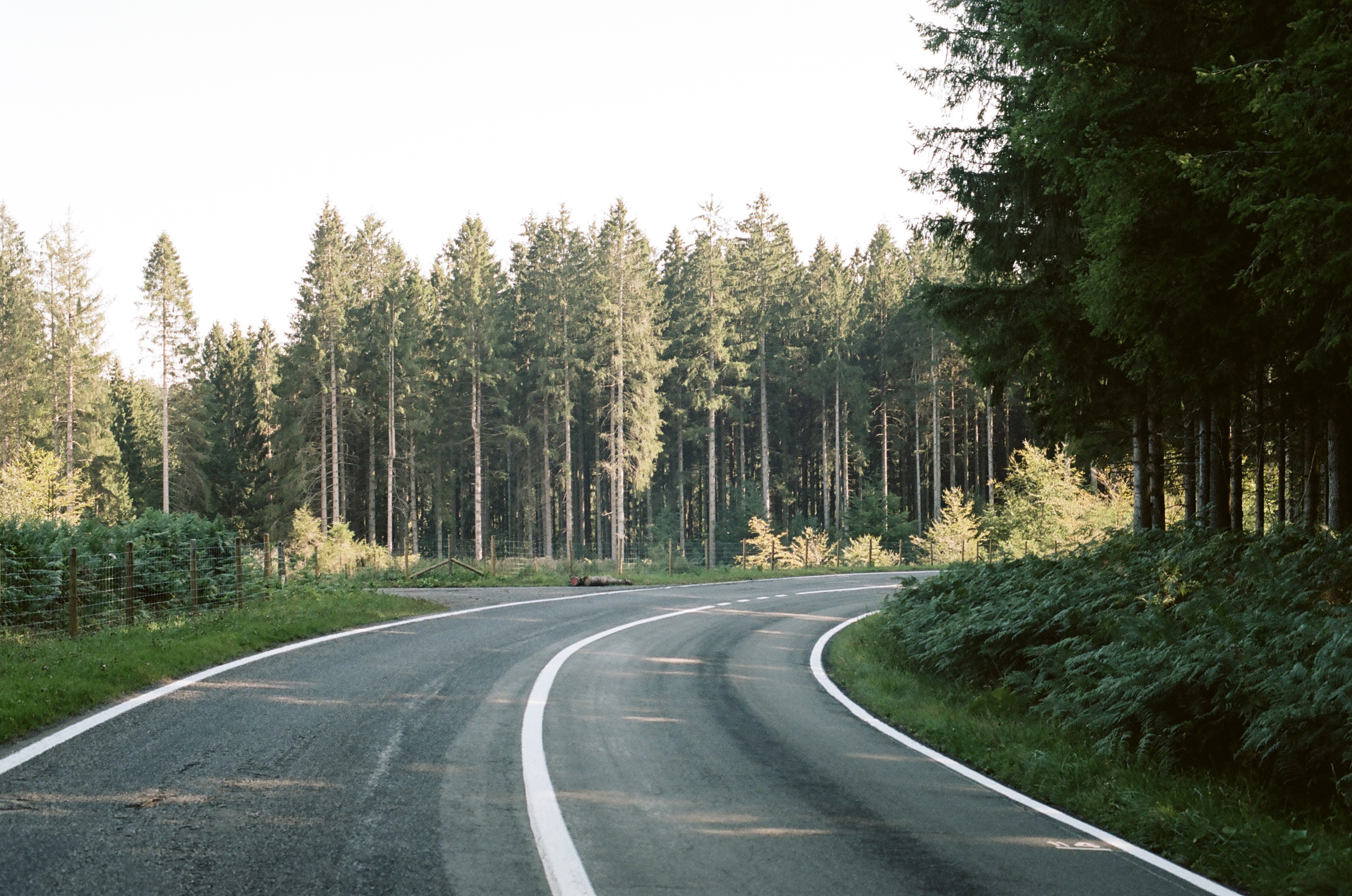