Sitting together at a small roadside restaurant, bellies filled with an ominous cocktail of french fries, skewered meats, rice and Morocco’s famous sugary mint tea, I was certain that the desert outpost of Foum Zguid was going to be our bed for the evening. Sebastian though, had other ideas. The preceding morning had not gone to plan. After breaking up our campsite by a palm plantation up a gravel track in the middle of nowhere, we had made our way back to the only paved road around. Having spent the previous afternoon on an aborted attempt to scout out a remote route — what appeared on our map as a minor road ended up being a veritable battlefield of boulders — we were eager to log some kilometers.

We picked up our pace, the wind did the same and nature taught us a lesson: strong winds in the desert become sandstorms. For the next three hours, we inched along at less than ten kilometers an hour, our faces obscured by helmets, sunglasses and buffs in an effort to keep the airborne sand at bay. Where there had once been commanding vistas of the Anti-Atlas mountains to the north and the sprawling Sahara to the south, there was now a hazy wall of of sand blocking the view. By the time the winds eased up and we stopped for lunch, any desire I had for a long ride had evaporated. The idea of calling it a day at 75 kilometres seemed prudent.

Five days earlier, Sebastian and I had embarked from sunny Agadir on the Atlantic coast wearing shorts and t-shirts with no intention of ever going to Foum Zguid. It was February and some faulty research led us to believe Morocco was the place for warm-weather riding. On the second day, our first of six planned in the Anti-Atlas mountains, we were hit by what locals assured us was ‘the worst weather in 25 years’. After an agonizing afternoon riding through freezing rain, the word in the villages was that there was snow on the next pass outside of Tafraoute. We ditched the plan, rerouted and headed for warmer climes. Now, 700 kilometres in, Morocco had taken us along sandy ocean-side roads, over rolling red and yellow foothills, past towering rock formations, and through rain, snow and a sandstorm. 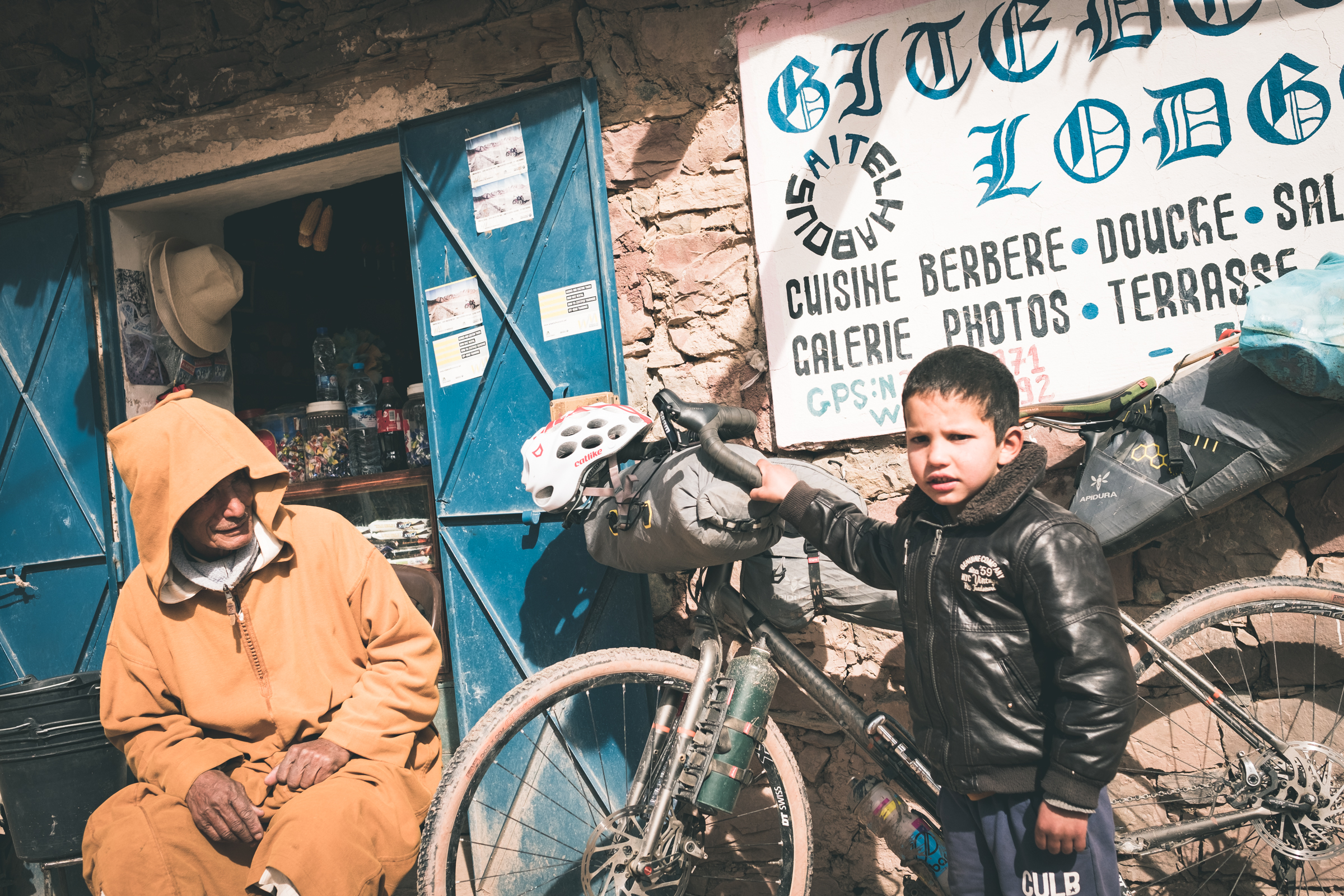 “Why don’t we ride to Zagora?” At first Sebastian’s query seemed like a joke. It was already 15:00 and Zagora was another 125 kilometers away. “The roads are long, flat and straight and we brought our lights with us didn’t we? It will be an adventure!”

Sebastian grinned. The ‘A word’ had done the trick. We bought a few cokes, some Snickers bars, another order of french fries and set off. The next few hours were spent chatting, listening to music and simply trying not to think about how much further there was to ride. The strength in our legs were slowly losing the battle to propel our 35 kilogram bikes forward. As sunset lit up the mountains and desert in hues of yellow and purple, we stopped to put on jackets, attach lights and gorge ourselves on the best cold french fries and warm cokes. We became entranced.

Whereas bikepacking or touring is usually the cycling world’s stop-and-smell-the-roses, with nothing to see but the illuminated patch of road ahead of us and the occasional distant fire of a Berber shepherd, we put our heads down and focused on the goal ahead. Some seven hours after leaving lunch, we pedaled into Zagora and checked our weary legs into the closest hotel. The sandstorms of the morning already a distant memory.

Having ridden as far East as our road would take us, it was now time to turn North. Sebastian had booked his plane out of Marrakesh and the only way back to this iconic city was over the Atlas mountains. Would a couple of extra days prove enough for the weather to clear over the country’s highest hills? We followed the famous Draa valley north. Palm tree-filled Oases bordered the road for over 100 kilometres, their vibrant greens a stark relief to the surrounding expanse of dry yellow. Crumbling old forts and decrepit Casbahs occasionally rose up out of the tropical trees and merchants along the roadside sold sweet dried dates to keep our coffers full. 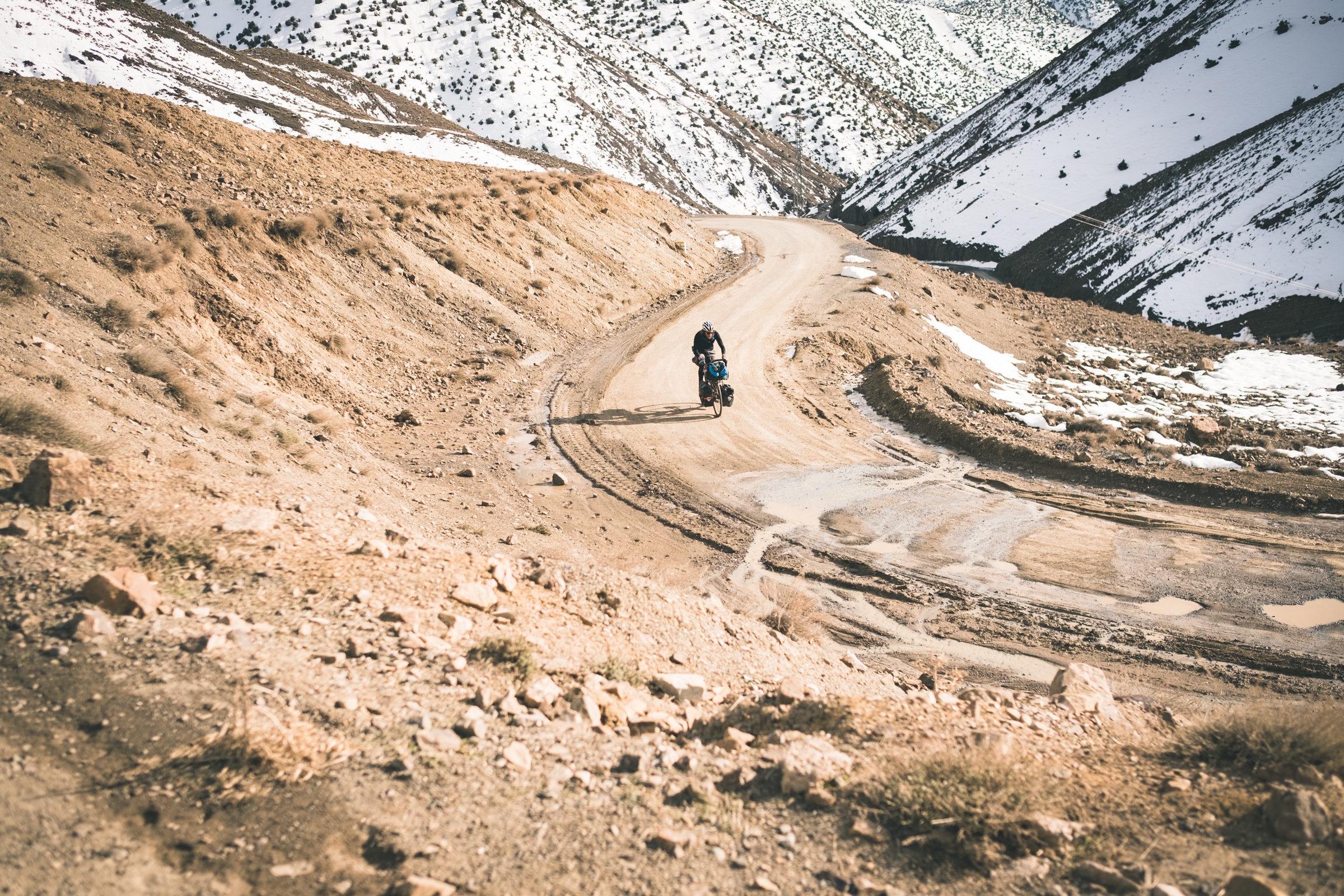 The urban expanse of Ourzazate marked the first true city we had seen since the start of our journey. After a quick resupply, we pedaled as quickly as we could to escape the chaos and traffic of this high-desert metropolis and made our way into the Atlas foothills. Camping below snow-capped peaks we were able to learn from a local that the pass we intended to ride was indeed open, even if the road was in bad shape. Having learned our lesson in the Anti-Atlas, the proper mountains would be taken more seriously. We would ride over them in a single day and avoid camping at higher altitudes.

Setting off at daybreak, we were soon rolling over good pavement and surrounded on all sides by yellow hills, dotted with magnificent white almond trees in full bloom. The tarmac chipped and cracked and turned to dirt as the switchbacks took us us higher. The first pass revealed the red and black mountainsides, brilliantly contrasted by snow on their peaks. The road continued along rocky slopes and down into valleys, with its condition alternating from paved to falling apart to gravel to mud. With each valley came a town nestled into the mountainside, and a new bunch of shepherds and goats, grazing along the side of the road. They would stare and wave — perplexed by two foreigners riding bikes in the mountains in February.

Snow drifts rose up along the borders of the road and the melting white masses left channels in the surface where it flowed. Deep in a canyon a small café sat in a clearing. The old man sitting outside beckoned us to come talk to him and as it was lunch time, we agreed. He brought us mint tea, freshly-cracked walnuts and bread and we made ourselves and our host our favorite avocado, cheese and tuna fish sandwiches. We sat around the table together and he pointed at different things and told us the berber and arabic words for them. Snow, adfla, thalaj. His grandson came out and the two posed for a photo. When it came time to pay, the man asked only for what we thought was appropriate. We offered 50 dirham and went on our way. 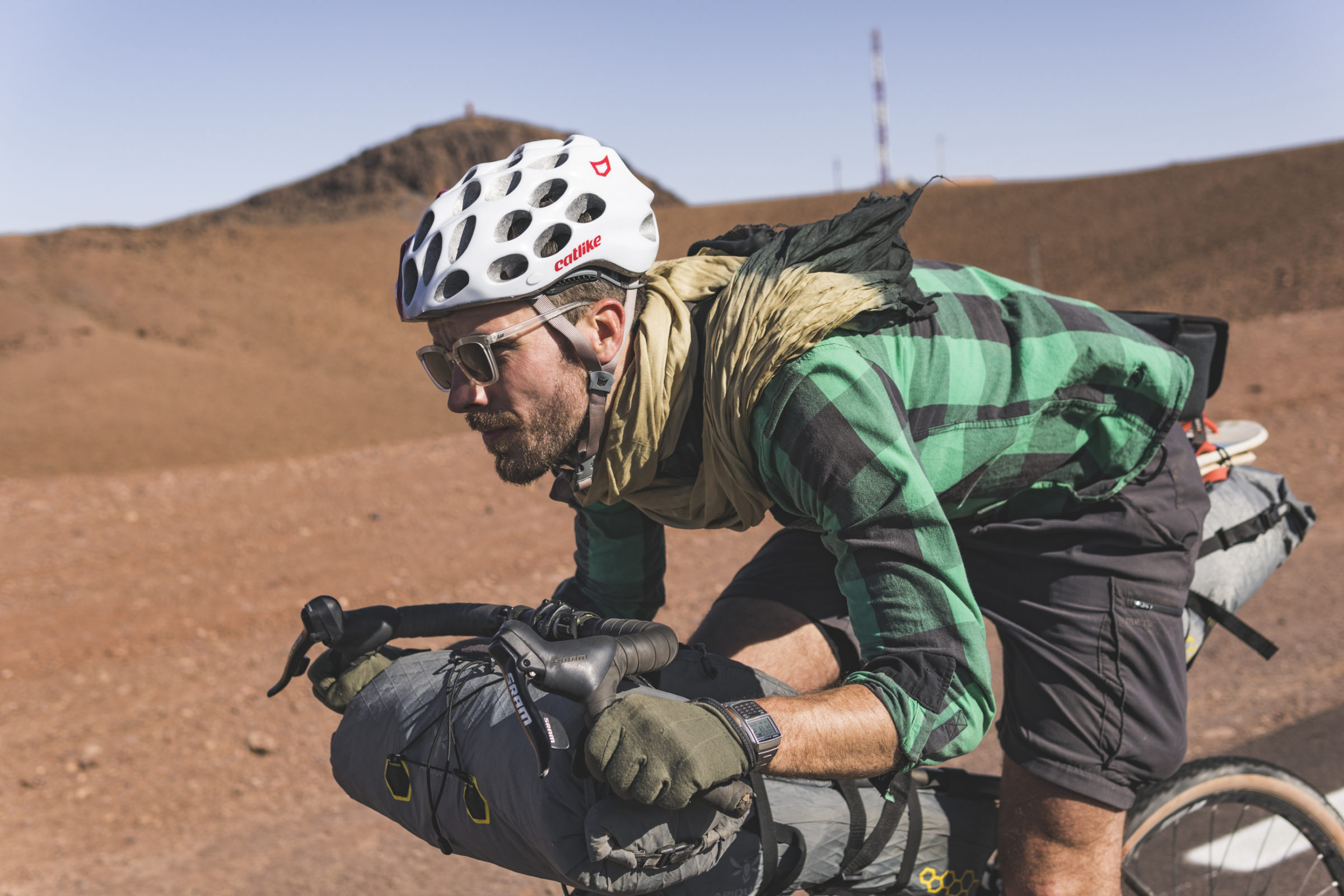 A dirt road with grades up to 15% led us out of the canyon up to nearly 2,200 metres — legs and lungs screaming as tires fought to find traction on the steep, loose surface. The mountains dropped away from us in endless white valleys, slowly turning green before disappearing in a yellow haze on the horizon. We were on top of Morocco. We stuffed our faces with whatever food we had left and aimed our bikes downhill to use the last light of the day. The snow melted away, the dark charred slopes were replaced by gorges full of evergreen trees and small villages, where locals were beginning to light the fires in their homes. The sun slipped away and we attached our lights once more, the magnificence of the scenery all around us fading to black.

As we rounded a final bend, the bright lights of Beni Mellal and, further off, Marrakesh swallowed up the darkness in greeting. The stars, both above and below, blending together at the horizon.

If you liked this story consider purchasing Soigneur Cycling Journal 19 where it was first printed.