Let’s assume that the cycling itself really isn’t important. Let’s view it as low-cost, gratuitous daytime TV fodder—stick men on bikes for post-prandial pensioners, addicts of various denominations, and the terminally unemployed. Let’s assume that what’s really important are the consequences of the cycling. Heresy I know, but let’s run with it anyway…

I don’t keep many jerseys, but I’ve kept this one, because I happen to think it’s important. It’s Pantani’s maglia verde, and I’ll never forget the day he wore it. Obviously it’s not the maglia rosa or the maillot jaune, but it is the one he was wearing when the suicide started. He hammered Alex Zülle in it, on a mythical stage to Selva di Gardena. At the end of the day they gave him a pink jersey, his first, and a few weeks later they gave him a yellow one at Les Deux Alpes. He hammered Ullrich that day, and I think it was the Pantani enigma perfectly distilled. I think what he was actually hammering was himself, and the more he hammered the more broke off. Eventually he just came apart, because he didn’t have the intellectual or emotional ballast to be Marco Pantani. How could he? He was just a twentieth century bike rider, after all. 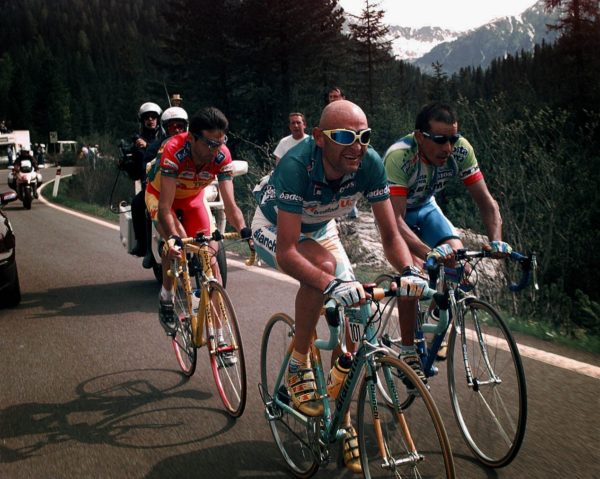 In retrospect, there was too much of everything, and too little of anything. You’re going to need some sort of faculty to cope with all those jerseys, and some sort of system to cope with all those idiot Catholics with their bandanas. Then how, if you’re not capable of happiness, do you deal with all that joy? What happens if you can’t assimilate the endorphins, and what does the glee become once it’s inside you? Can it be washed through with the masking agents, or does it mutate? What does it become, and what will it do to you when something like Madona di Campiglio happens? Imagine something like Madona di Campiglio happening to a normal person, and then imagine it happening to somebody like him. We’ve all seen the film, but I’m not sure any of us can imagine the vortex. We’ve seen the hotel room, but not the pit beneath it.

So anyway I got to thinking about consequences of the jersey, and I rang Simone Leporatti. He’s a former professional cyclist you’ve probably never heard of, but he’s still with us (very obviously) and he was there that day at Selva di Gardena. It was his first Giro, and when he’d gotten down to Nice for the prologue he’d been dumbstruck. It had been his life’s ambition, and being there with Pantani, Zülle et al had rendered him speechless, literally as well as figuratively.

As it transpired the stage to Gardena was the seventeenth and last of his Giro “career”. He was one of the thirty-four mortals Pantani sent home over the time limit, though not, he was at pains to point out, one of the nine who climbed off. He said it had been full gas all day, and by the time they realized they were going to be fuori tempo massimo it was too late to do anything about it. One way or another Pantani did a hell of a lot of hammering that day, and a hell of a lot of self-harming.

Simone said of course he regrets it a bit, but not that much. He seemed pretty magnanimous about it all, and one imagines that being Simone Leporatti was much better than being the late Marco Pantani. We chatted about this and that, and then he said something I didn’t fully understand. He told me that, irrespective of the ramifications for Pantani and the existential implications for the sport as a whole, the stage had been disastrous. I told him that was at variance with the public perception, because by common consent it was one of Pantani’s great exploits. He agreed with that, but he said he understands cycling much better now than he did back then. Back then he’d assumed professional cycling was about the cycling but now, as a fully formed man, he understands that it isn’t.

Simone’s team, Amore & Vita, had started the day with eight guys. He was one of five who failed to start the following morning, among them the sprinter Glenn Magnusson. He’d already won a stage down in Abruzzo, and had he got round he’d have been thereabouts on the final day in Milan. He didn’t and so he wasn’t, and for the sponsors that was crap. It was crap for Polti, TVM and Vini Caldirola as well, because they each lost four. Four guys is almost half a cycling team, and they have algorithms for things like that.

Michele Bartoli was riding for ASICS, and he was a big champion. He began the stage in the maglia ciclamino, but he was over the time limit with three of his gregari. There was a stink about that and Boifava, the DS, said you can’t just send the maglia ciclamino home like that. He told Carmine Castellano, the race director, that it was an outrage, that it was tantamount to burning a billion lire of his sponsor’s money, and that he’d have that on his conscience. I rang Castellano and he did. He did and, 22 years later he still does because he’s a very nice man. Boifava was right.

The problem, he explained, was the others sponsors had rights too. They’d seen– because they’d been watching–that Bartoli had been over the time limit and that Mariano Piccoli was the new maglia ciclamino. His sponsor, Brescialat, was a major contributor to Italian cycling, much bigger than ASICS. They’d have sued had he readmitted Bartoli, so what was he supposed to have done? He’d been damned if he did and damned if he didn’t. All damned. They could all go to hell.

ASICS pulled the plug after that, and Amore & Vita were never invited back. Their owner, Ivano Fanini, was a bit of a gobshite, and he said cycling was lousy with doping. He said that if it didn’t change, something really bad was bound to happen, and that went down like a lead balloon. Nobody likes bad news, do they?

They’re still going, Amore & Vita. They’re quite a way down the food chain, but they’re still plugging away at love and life. Simone Leporatti is their DS, and evidently he’s doing OK.

What a jersey it is, and what an afternoon of cycling it was. 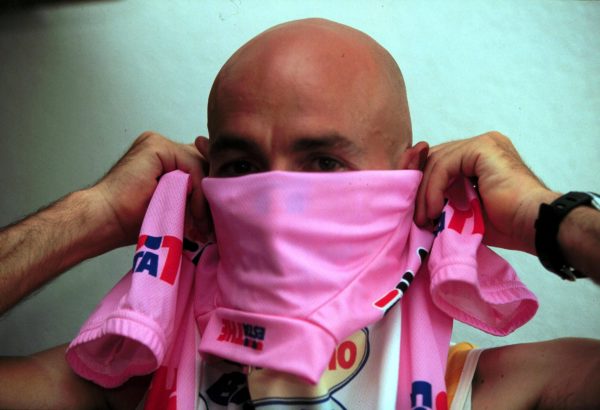