Tom Dumoulin is one of the best bike racers in the world, but he cannot understand why he is treated as if he were a hero. Robin van der Kloor and Hans Straus from De Limburger sat down with the man from Maastricht to speak about his life as an icon, his struggles as a leader, and the guilt he feels about his relationship with his wife. 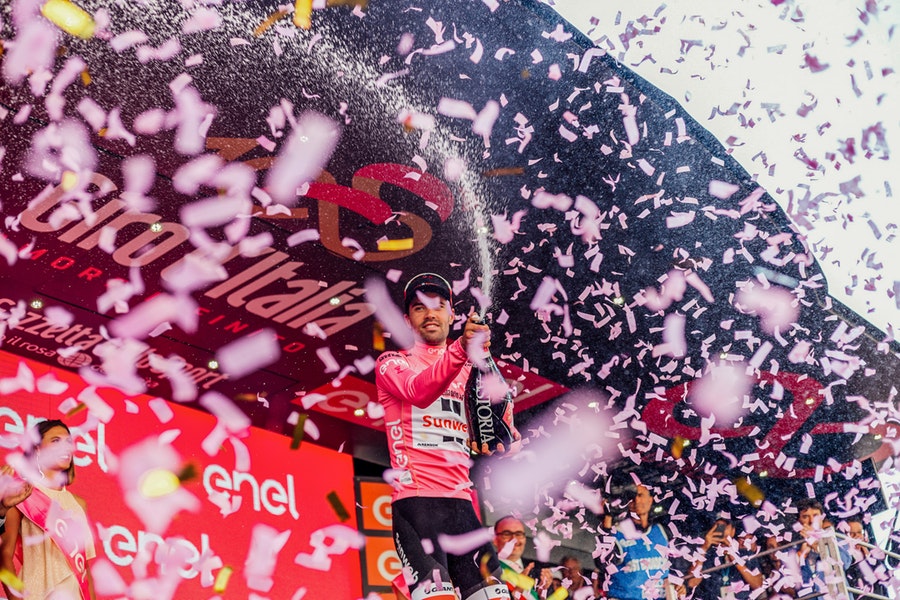 The Giro or the Tour—whatever. How is it to be married?

“That was a very special day. Winning the Giro was a real life achievement, but getting married goes beyond that. I imagine that having kids could even go beyond that, but if you ask me, that can wait for another couple of years.”

You went to Nepal for your honeymoon. That’s not the most common destination for a newly married couple.

“We like to travel to places that lie outside of our comfort zone. To be honest though, it was a bit of a disappointment. Perhaps my expectations were too high. I had hoped to see a lot of the culture of old Nepal, how people live there. I experienced too little of that. For five days, we rambled around the Annapurna massif. It’s very beautiful, but not so special. It was just hiking in the mountains, and I could have done that in the Alps as well. And then we could have finished the evenings off with a good glass of wine and a meal. In Nepal, we just sat in a hut up on the mountain with nothing else around us. We hiked from nine in the morning till three, and by five in the afternoon it was already dark. And then, there is nothing to do there, eh. I can imagine that people might go on a journey to find themselves there, but that’s not what we were looking for on our honeymoon.”

Did you still go and climb a few 8000-metre peaks?

“The highest point we reached was 3200 metres. We couldn’t go any higher, because then you need to take diuretic drugs to be sure that you don’t get altitude sickness, and I can’t take those, because they are on the doping list.”

Didn’t your team’s management wish you had gone on a beach vacation instead of trip through the Himalayas?

“They thought it was fine. If I was, because of cycling, which is my work and my passion, so restricted that it became the only thing in my life, I couldn’t handle that. I have to be able to travel sometimes, do something different. I have to be able to drink a beer every once in a while during the cycling season, chuck on the barbecue and be able to eat something that isn’t healthy. I just have to plan those moments well. If I weren’t ever able to do those sorts of things, there would soon be no fun in it for me anymore.” 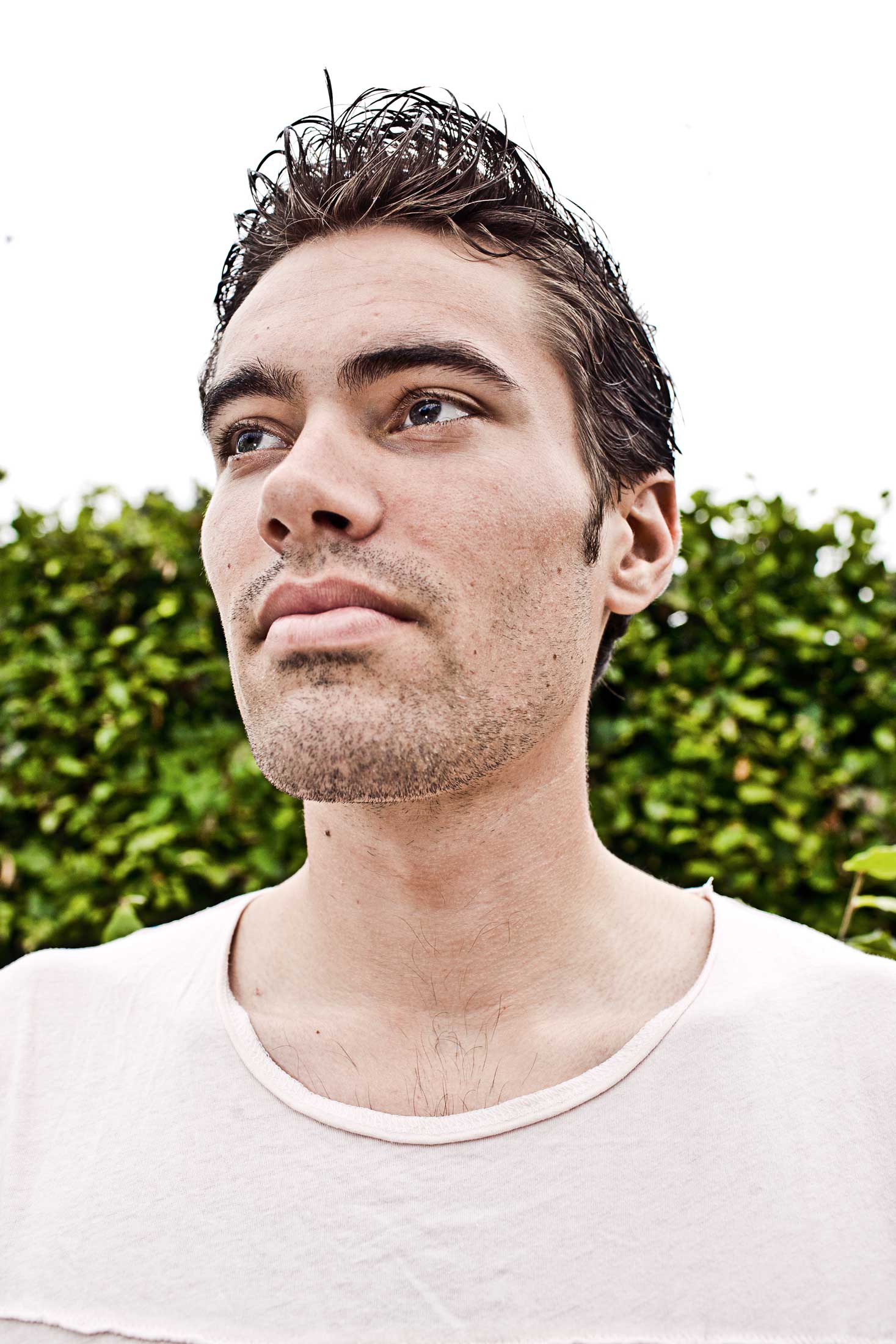 How are you enjoying racing? Five years ago, the life of a grand-tour contender really didn’t appeal to you.

“I always had the idea that the hilly classics and time trials were best suited to me. I would have been ok with it had I stuck to that. I live a much more extreme life than I did five years ago, and it’s not necessarily any nicer. I find satisfaction in getting the maximum out of myself and think a training ride around the Gavia and Mortirolo is beautiful, but I’m getting closer and closer to the limit in terms of training and nutrition. That’s been such a gradual process that I never really noticed.”

A lot of people find cyclists too lean.

“I’ve not yet had feedback from my body saying that I am going wrong. Sometimes, I eat too little for a few days and then run into a wall on the fifth day. For me, that’s a sign that I need to eat more for a day. On the fifth day, some others continue eating too little, and that becomes problematic. I see that other GC riders, such as those on Sky, follow an even more extreme diet than I do. And if you then win the Tour, I can also understand that you swing completely the other way, as Geraint Thomas did. During the post-Tour crit season, he sure enjoyed a beer.”

“The problem with cycling is that it is an extreme endurance sport, so it is reasonably forgiving. You can be too lean and still perform well sometimes. An example of that, I think, was Mara Abott at the Olympics in Rio. She was clearly unhealthily skinny, but she almost won the road race. I just thought—how does she do that? You know, the physical limits have been kind of already reached, I think. We are training so well… there is very little margin to be gained. My body also just has its limit, and I’ve reached it. In the past few years, I’ve not pedalled any harder. The only way I’ve become better is by increasing my endurance and reducing my weight.” 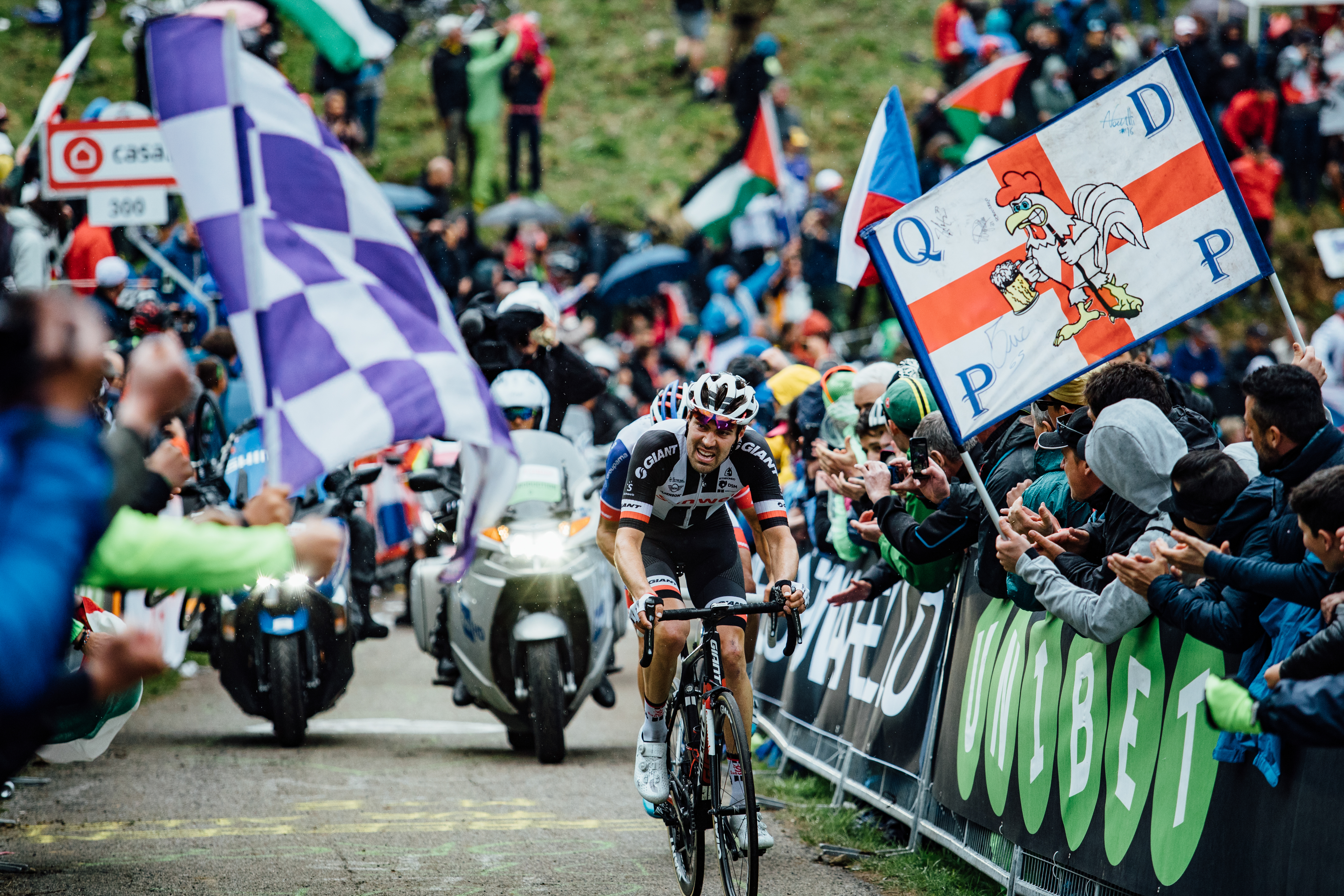 What steps do you have to take to be able to win the Tour?

“I wouldn’t know now. I hope I can build up my endurance capacity a little more, so I have a bit more left on the final climbs; grow tougher; and gain more experience: make the right decisions at the right moments.”

Those are things that you can control. You have much less control over your team. How do you handle that?

By slamming your fist hard on the table?

“I do do that—too often sometimes. That is the problem. I demand a lot of myself, so I find it difficult to accept when I have the feeling that others are not demanding so much of themselves. That is also hard, and to bring that up in the right way is very important. It doesn’t always go over well. People always find that sort of thing odd to hear, but every manager has to deal with that sometimes, don’t they?”

You demand the physical maximum from people. That’s probably not the case in a normal office.

“Ok. But cycling is their job too. You guys are judged by the quality of your articles. And, as a ‘boss’, I judge my teammates by how hard they ride on the front, to be blunt.” 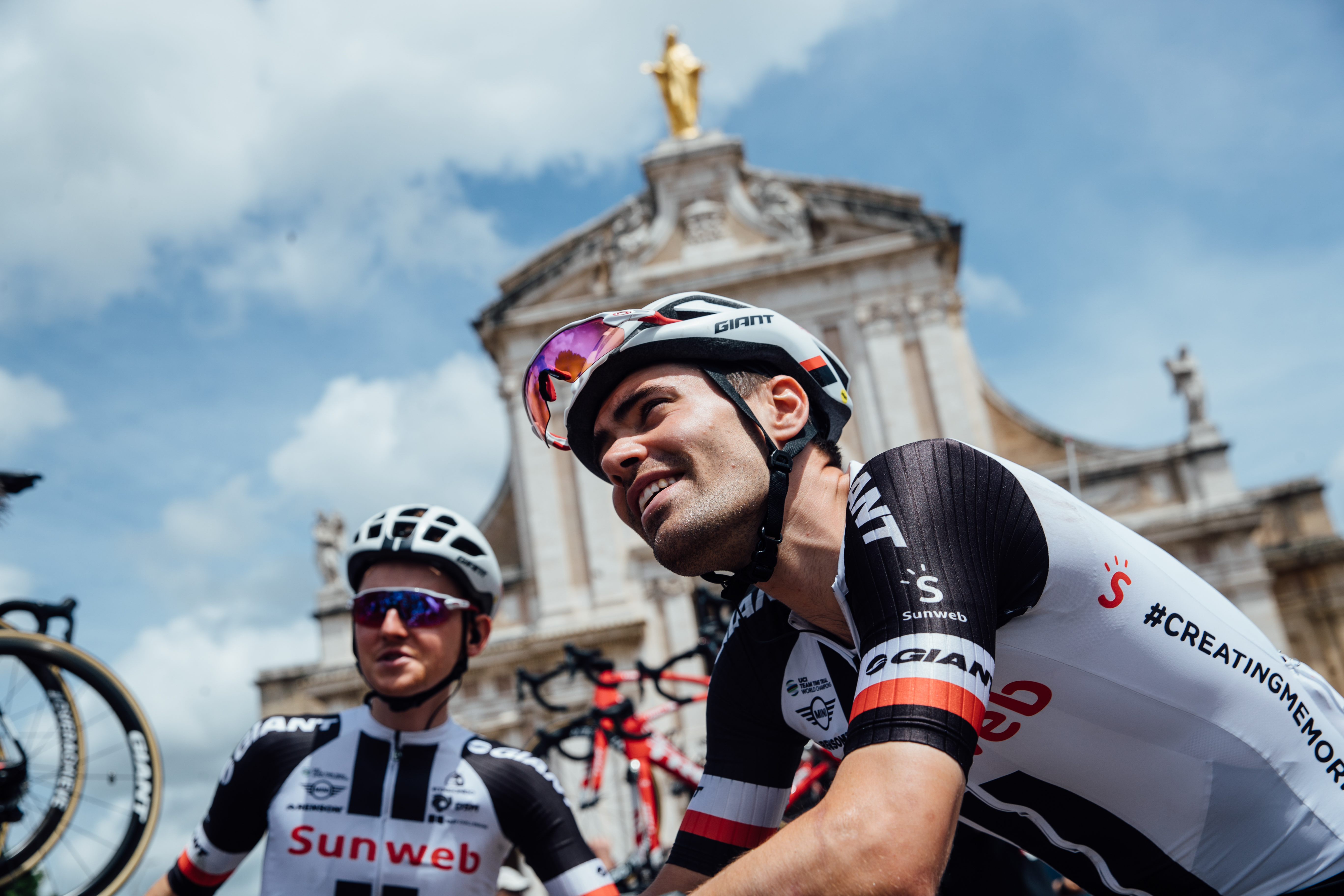 And your wife Thanee has to live with that regime of dieting and training, all your efforts to get the maximum out of yourself.

“That is why I am so amazed by her. I drag her into all that with me and sometimes I feel guilty about that. She also just has a job, so it’s always a compromise. We went skiing for a couple of days with a big group of friends. Then, I really see how she looks out for me. During the cooking, a big hunk of cheese goes into the risotto. That’s how it’s supposed to be, but not for me. Thanee is constantly thinking about things like that and coming up with alternatives, so I can still eat with everyone. She’ll buy special things for me in the supermarket. And it’s not as if it is her passion. It is my passion, and I make good money with it. I have many reasons to choose this life. She has but one reason: ‘I love Tom’.”

She is often there, as she was during the difficult mountain stages in the Tour. Can you then have a bit of a private moment?

“That is practically impossible, because there are always dozens of people around, but, one way or the other, it happens. Then, we have a sort-of moment together with all the snoopers around. One time, she brought two girlfriends, and they were shocked by the way things go after a stage—what a madhouse it is with all those people so close to me. And they were right.” 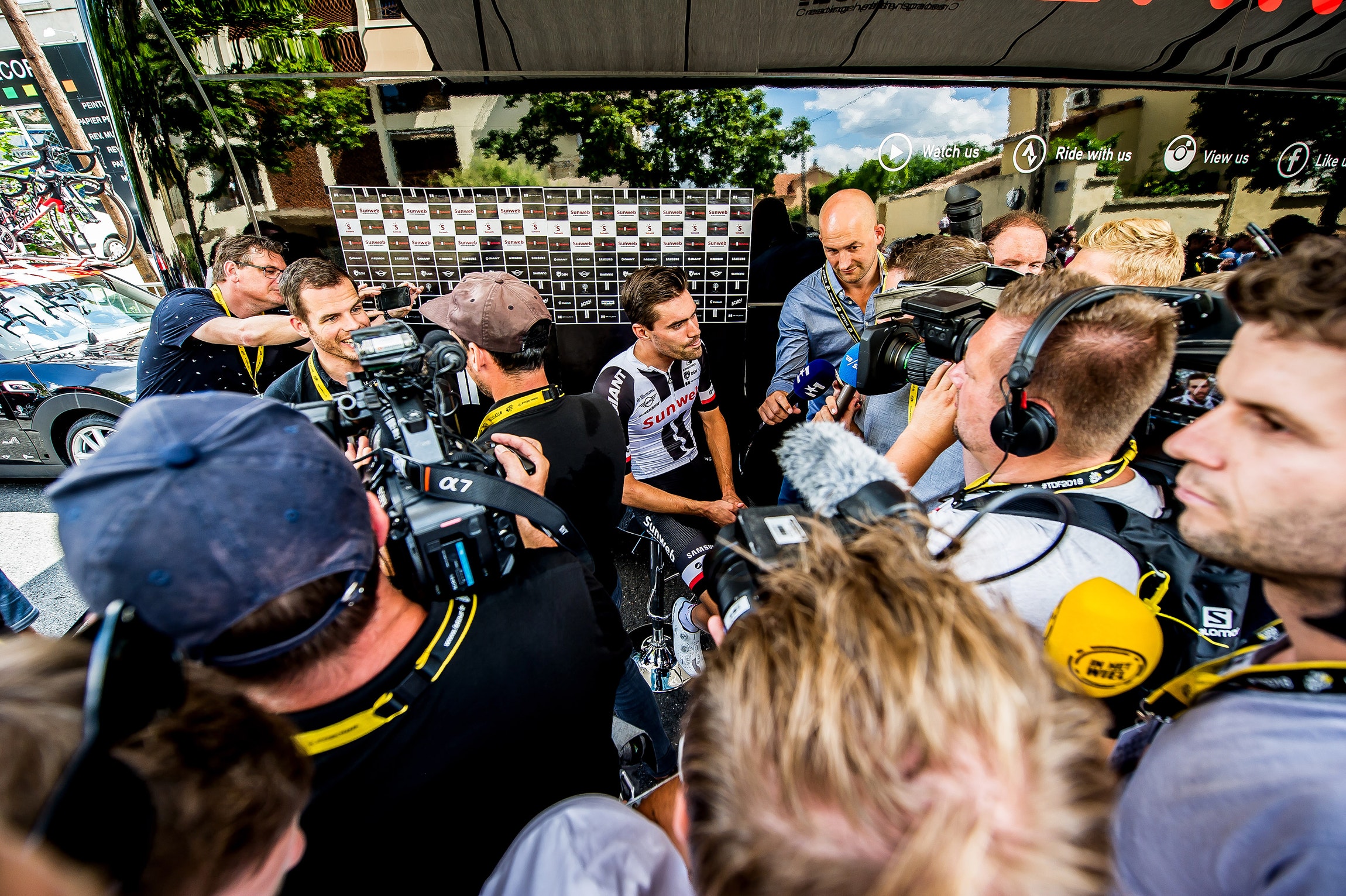 The ‘charm of cycling’…

“Actually, there is nothing charming about it, and I think it’s ridiculous that the press and public get up so close. That should be better organised. There should be a clear mixed zone that I can walk through when I am ready, as is the case with all sports. A football player doesn’t get swarmed as soon as the final whistle is blown.”

In the final mountain stage of the Tour, when you couldn’t contain your anger, you surely wished there was a mixed zone.

“Yeah… I do understand that makes for good television and stories. But still. It is not normal to expect me to deliver an almost inhuman performance for three weeks and not even have a moment to catch my breath.

And still you keep answering questions.

“That might be my mistake, that I keep doing that. Despite my frustration, I try to be polite. That is really difficult. At home, it’s not like that. But I have to accept certain things. I could just not give a damn after the finish and say, ‘Boys, you’re on your own.’ But that wouldn’t solve anything.”

What is it like to be extremely good at something and get an extreme amount of attention for it?

“I was never taught to worship heroes at home. That’s why it is so strange to be treated as if I were one.”

The celebration in Maastricht on a warm Wednesday in May, 2017…

“At that moment, I wished it was simpler. Then, I could have really enjoyed it. At the time, I thought something like, ‘I’ll look back later and realise this was very special,’ but in the moment I found it awkward. I find it odd when people cheer for me, because I don’t think that what I do is so special. It’s more what other people make of it. For me, a doctor who saves a life does something really special, but no one stands to cheer for him. Everyone stands to cheer for the guy who can ride a bike fast. That is actually really dumb. If I weren’t an athlete myself, I wouldn’t go to the town square to cheer for a cyclist or a footballer.” 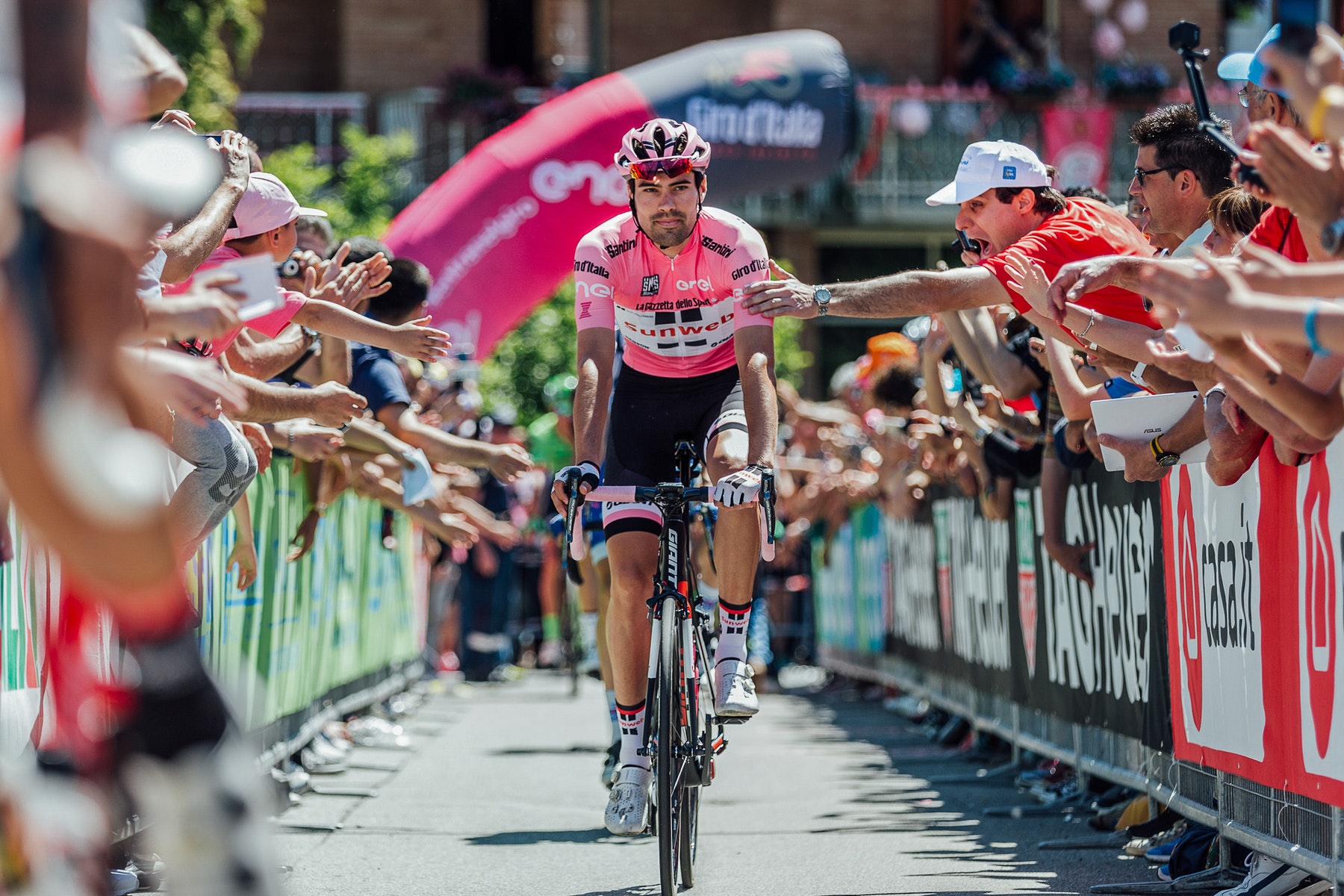 Do you believe in God?

“I don’t see any evidence that God exists. I’d like it if there was something after death, because otherwise there’s just emptiness. That is scary and sounds miserable. Still, I’m afraid that I have to accept that.”

When did you last cry?

“I’m not much of a cryer. Last year, I cried when my dad lost his brother and sister in a short time. I had those tears mostly because I saw how sad he was. I have good memories of them, but they were a bit further away for me than for him.”

What do you enjoy most?

“A good meal out with family or friends, with a glass of wine. Or throwing the barbecue on at home with a beer in my hand. Oof, that sounds a lot like Laurens ten Dam! Okay, another example then: the feeling of a victory, for however short a time that lasts.”

Who do you admire the most?

“I have an enormous amount of admiration for my wife, Thanee, because she endures it all with me, because she chooses me and my extreme life and still pursues her career as a psychologist. No one does the laundry for me, eh. She works hard and is also tired when she gets home. It’s sometimes difficult, but I wouldn’t want it any other way.”