My love for the ride
Strade Bianche
Places 5 min

Cycling the best of Basque climbs with Etxeondo

Etxeondo, located in the village of Villabona, the heart of Basque Country, is a company with firm roots in the Basque cycling culture. We asked the guys behind the brand, Basque natives and fine connaisseurs of what makes cycling great, to share their insider knowledge of Basque roads.
They selected 5 of the best climbs the region has to offer, from the Bay of Biscay to the heights of the Pyrenees. Include these five beautiful climbs in your cycling itinerary and you’ll encounter the wide variety of landscapes and roads that make Basque Country a superb place to cycle.

Some consider Jaizkibel, a small mountain range stretching along the coast from Lezo to Hondarriba, to be the first westernmost peak of the Pyrenees. The most popular ascent of Jaizkibel starts in the small dwelling of Lezo and snakes up steeply so you quickly loose sight of the Port of Pasaia. The Lezo ascent is a decisive climb in the Clasica San Sebastian, and since it’s featured twice in this monumental one-day race, only the riders leading in the second passage have a chance to win. It also made an appearance in the Tour de France of 1977 as well as the 1992 edition. 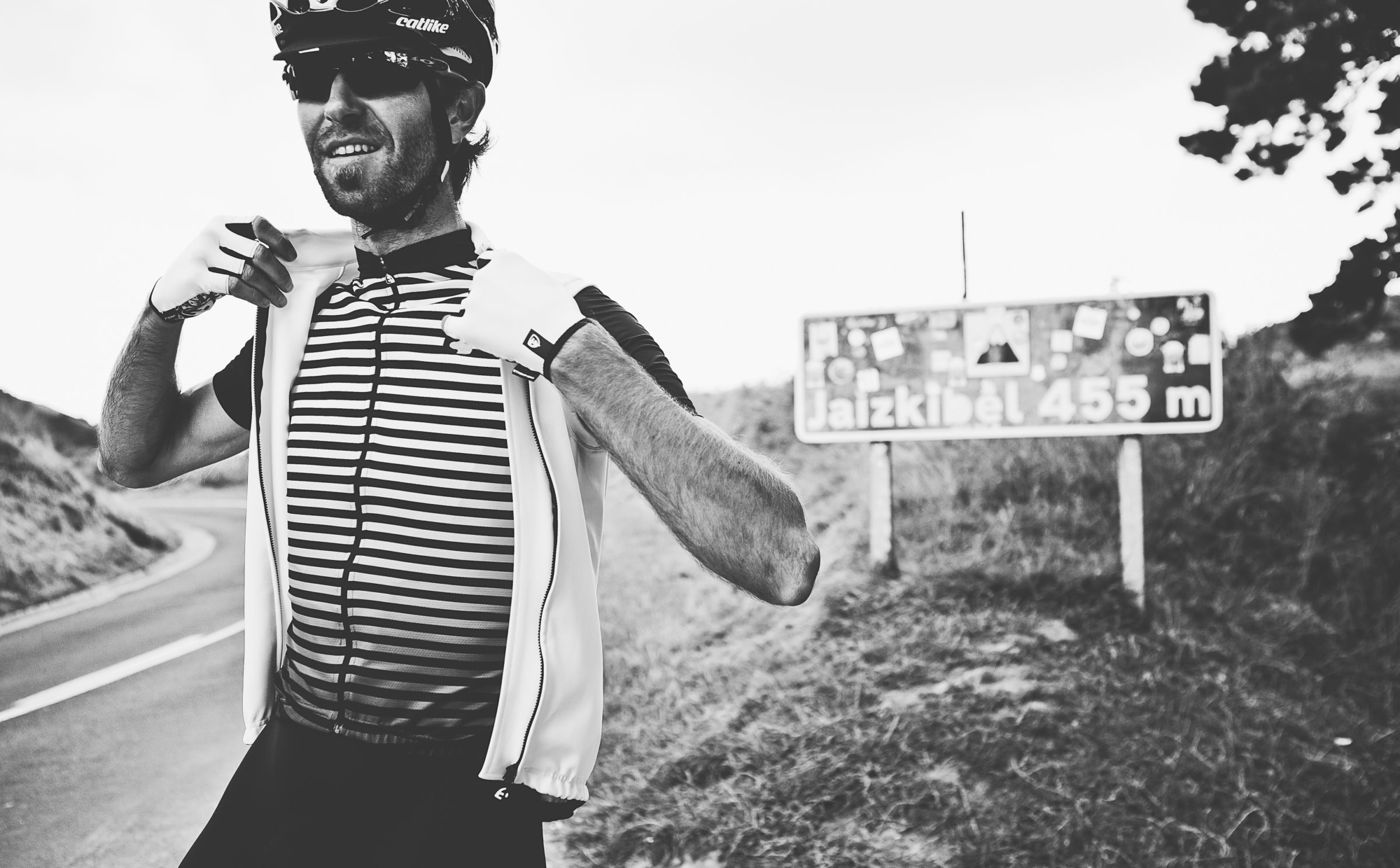 On paper, Jaizkibel is not particularly tough: a length of 8km and an elevation gain of 445m it measures an average of 5%. But Jaizkibel is not a steady climb,  and includes serious hairpins and gradients higher than 15%, plus a tricky sea wind featured in the climb’s last kilometer.

The top of the climb is easy to miss, as there is no sure summit. But high above the main road you’ll spot a transmission tower and a slightly unkempt road leading to it’s gate. Cycle up here for the best views of the Bay of Biscay. Not surprisingly, you’ll see an array of stone garrisons on the treeless hilltop, overlooking the deep-blue of the sea and keeping a close eye on the French border.

The Lizarrieta climb starts in the French department of Aquitaine and leads right up to the Spanish Basque border before descending towards the municipality of Etxalar. Some use the name Palomeras for this climb rather than the Col de Lizarrieta, sharing its name with the local hunting posts (Palomeras) from which the spectacular form of pigeon hunting is performed. This technique using nets to catch the birds dates back to the 15th century and the hunting day is followed by an open-air festival in the streets of Etxalar.

The climb is a total of 8.7 km long, but locals only regard the last 5 kilometers as a true climb, averaging 6%. The Palomeras climb winds up gradually over a narrow and quiet road lined by beech trees and ferns. The multitude of colours from the surrounding foliage and deep roadside drops filled with small waterfalls make this a stunning ride. 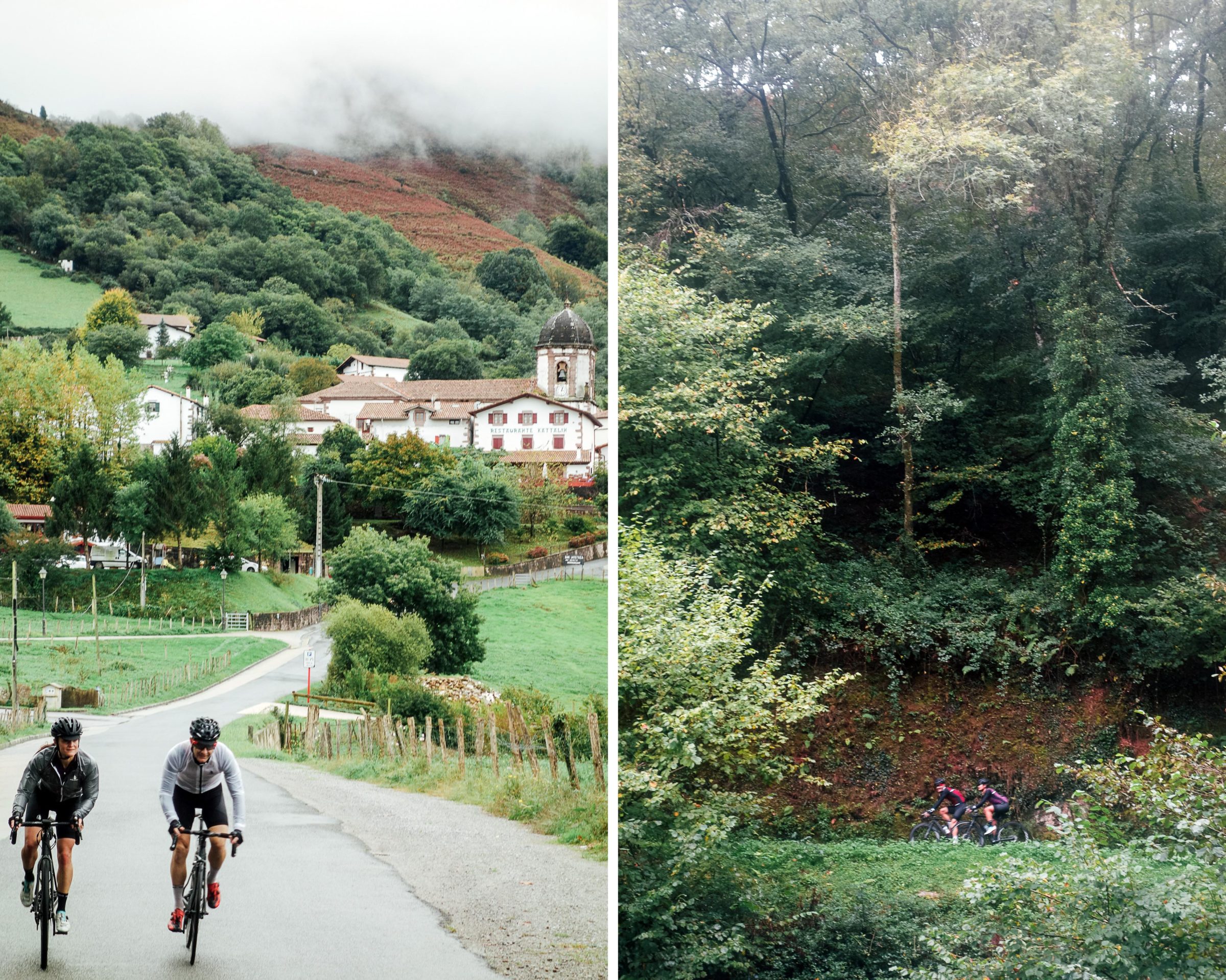 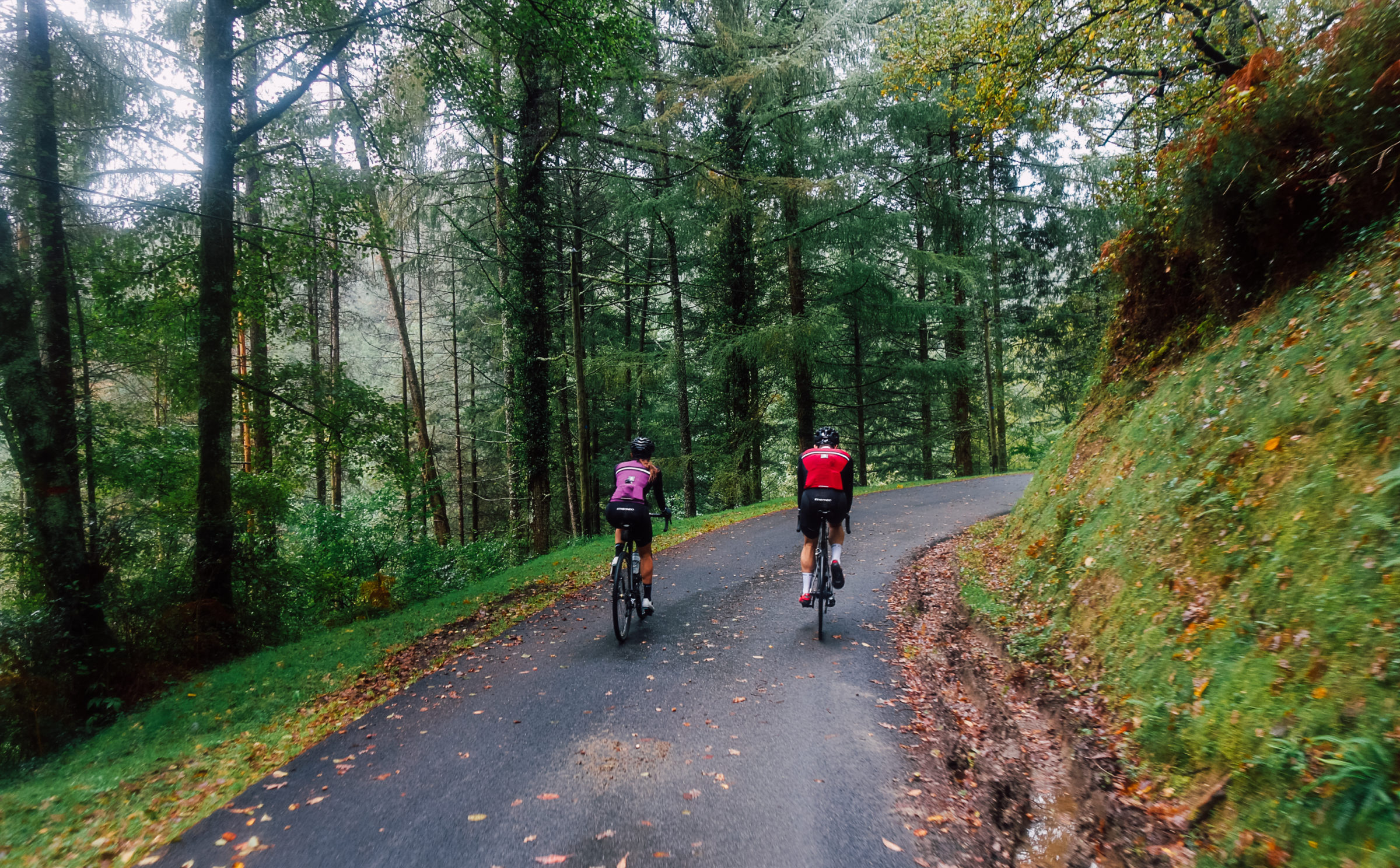 The Bianditz climb starts in the town of Oiartzun located at the foot of the Aiako Harria massif. The impressive massif and its surroundings were declared a national park in 1995 and boasts three main summits also known as the Three Crowns: Irumugarrieta (806 m), Txurrumurru (821 m) and Erroilbide (837 m). The lesser known Bianditz peak is located further south in the park along the boundary with Navarre and holds one of the most beautiful ascents of Basque Country. The road and its gentle turns never bores and leads up to an impressive pre-summit with blue silhouettes of mountains stacked in the distance. The actual peak has a smooth grass field rolling down into the valley and gives you an unforgettable view. 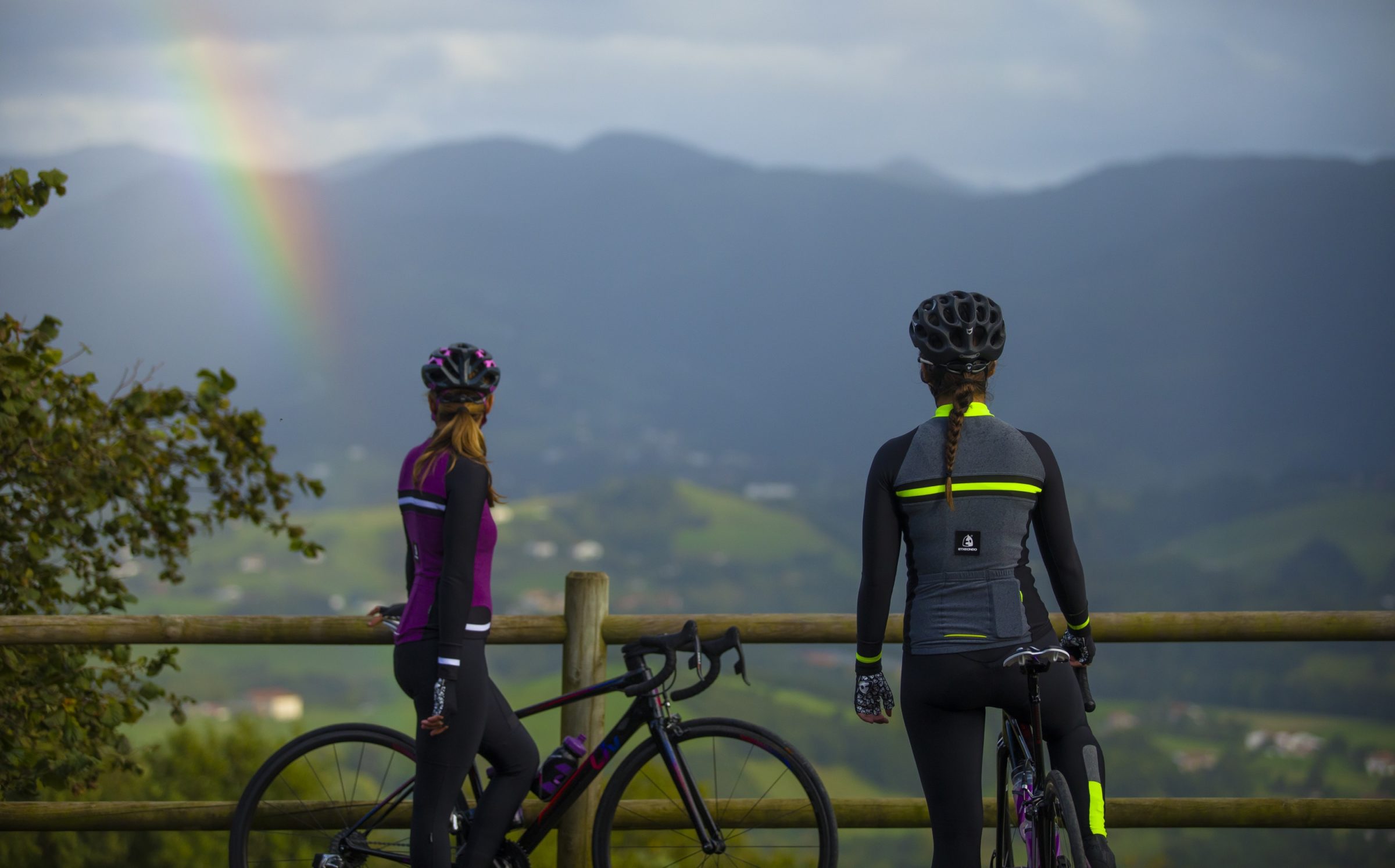 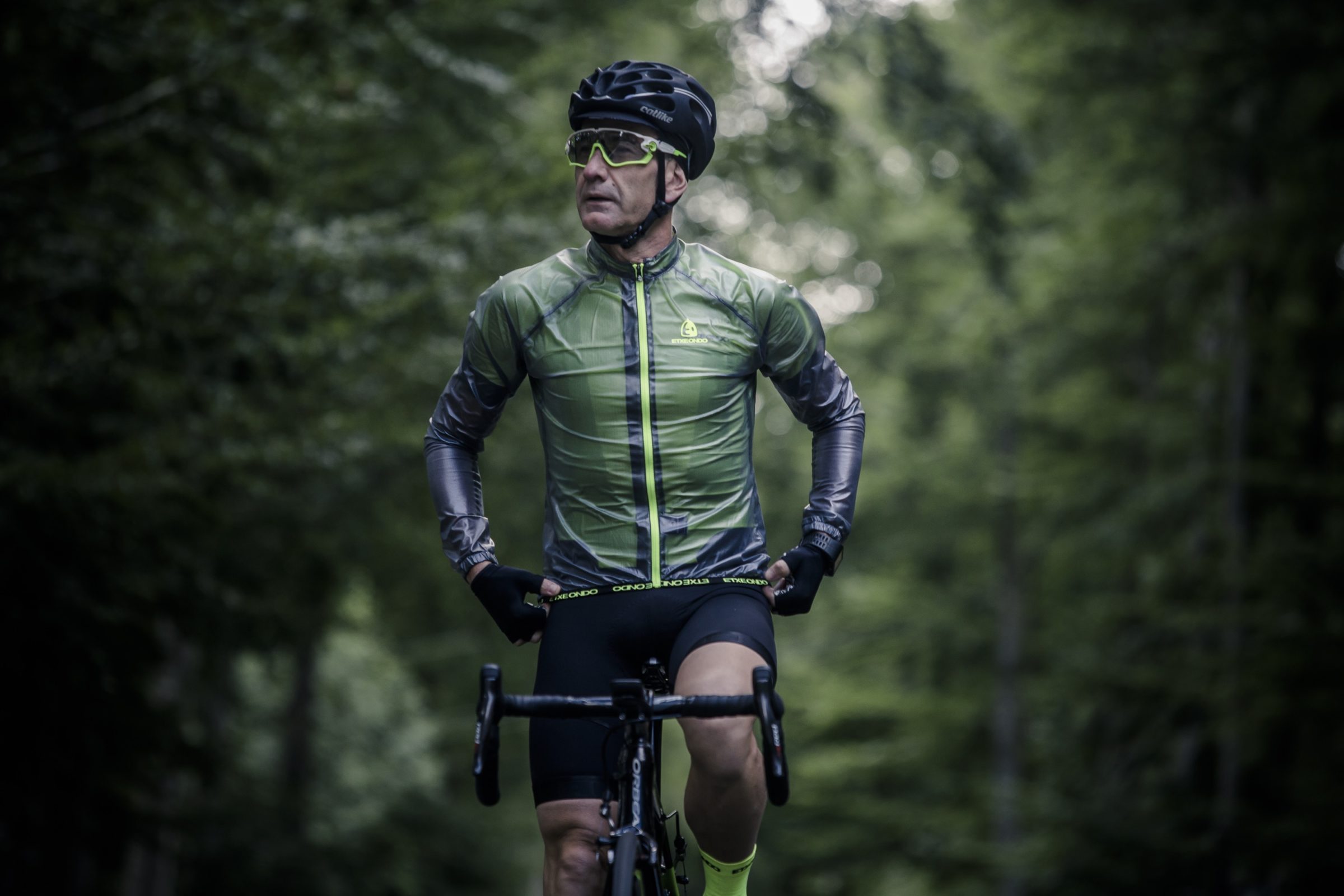 Ascending Bianditz is an incredibly smooth ride with a steady gradient of around 6%. After reaching the summit you can keep following the GI-3631 down to the entrance of the Artikutza (beech) forest reserve on the border with the Navarra province. You’re allowed to keep cycling deep into the reserve until you reach the isolated village of Artikutza itself. It’s a stunning, winding decent into ‘Lord of the Rings’ country. You’ll find a bunch of signs in the village, marking (hiking) trails leading further into the uncharted territory, but these are seriously off-road trails, only passable on a ATB.

Andazarrate averages 6% over 6 kilometers climbing from 100 m above sea level to a height of 430 meter, but the numbers don’t do it justice. Andazarrata is a tough erratic climb including a number of sections with gradients well over 10%. The KOM is currently held by Laurens ten Dam, who set it in April this year during stage 3 of the Vuelta al Pais Vasco.
The ascend starts in the centre of Asteasu, just 15 minutes from Etxeondo’s headquarters in Villabona. It’s no wonder the climb is a regular in Etxeondo’s group rides. Andazarrate summits after 6 kilometers of climbing through typical Basque landscape with traditionally built farmhouses scattered across the rolling green hills. If you are fit enough, you can continue climbing by taking a left turn from the summit. From there another 2 kilometers of roads takes you right up to Iturrioz, a famous Basque farmhouse at the foot of the Ernio mountain. The summit parking is a favourite starting point for keen mountaineers and locals out for a Sunday morning walk. 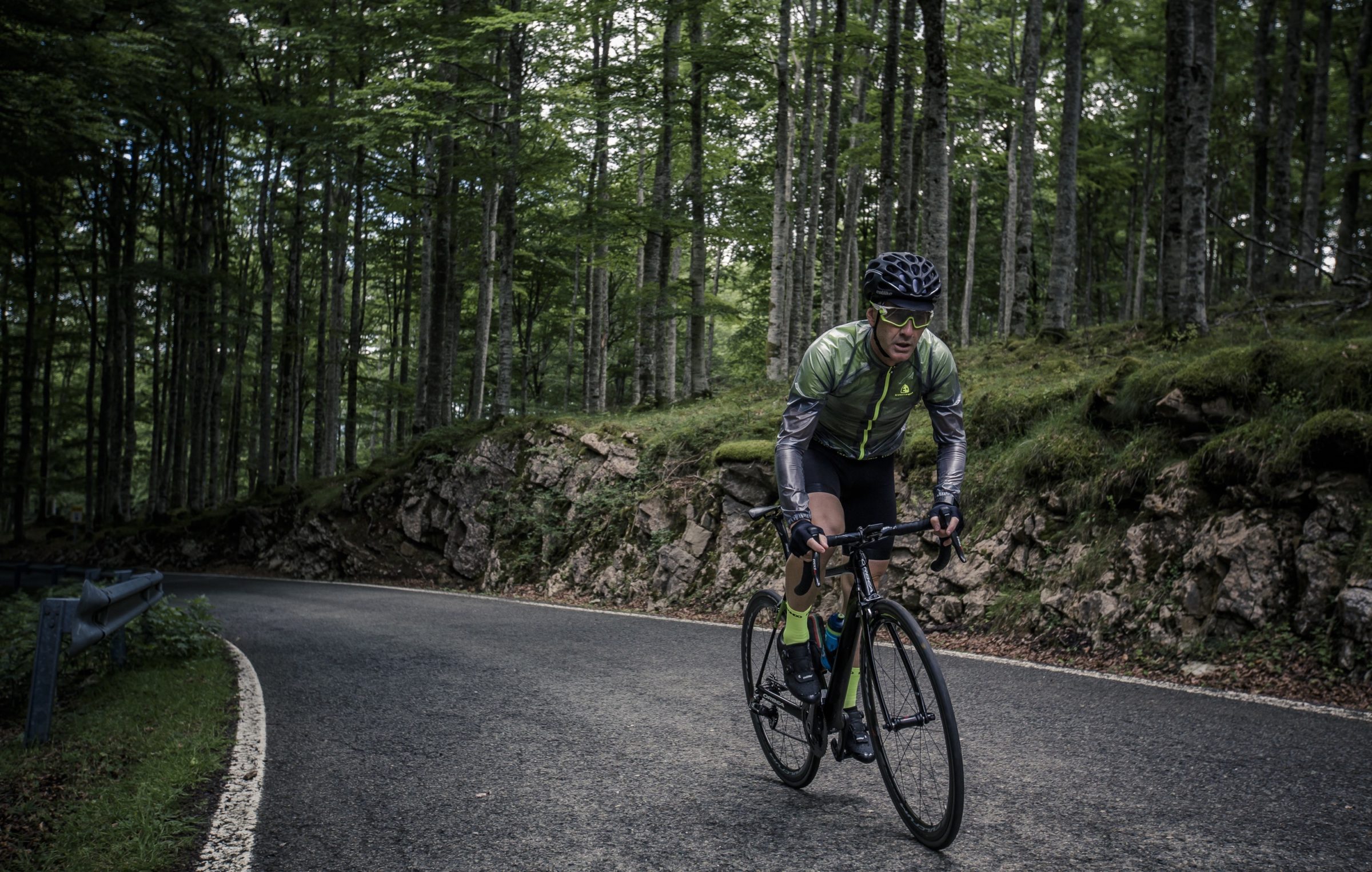 For this road to ride you start off in the French community of Saint Etienne de Baigorry in the Pyrénées-Atlantiques departement. The 672 m high Pyrenean mountain pass links the Baztan and Baigorri valleys in the Basque Country. The climb has a length of 7.7 km and over 500 meters elevation with a gradient median at around 6,5%. In the climb you’ll notice the surroundings gradually take on a real high mountain feel and reaching the top you’re full and well in the Pyrenees.
Take time to look around into the vast valleys on both sides guarded by the spectacular Autza mountain peak towering above the landscape at 1304 meters high. 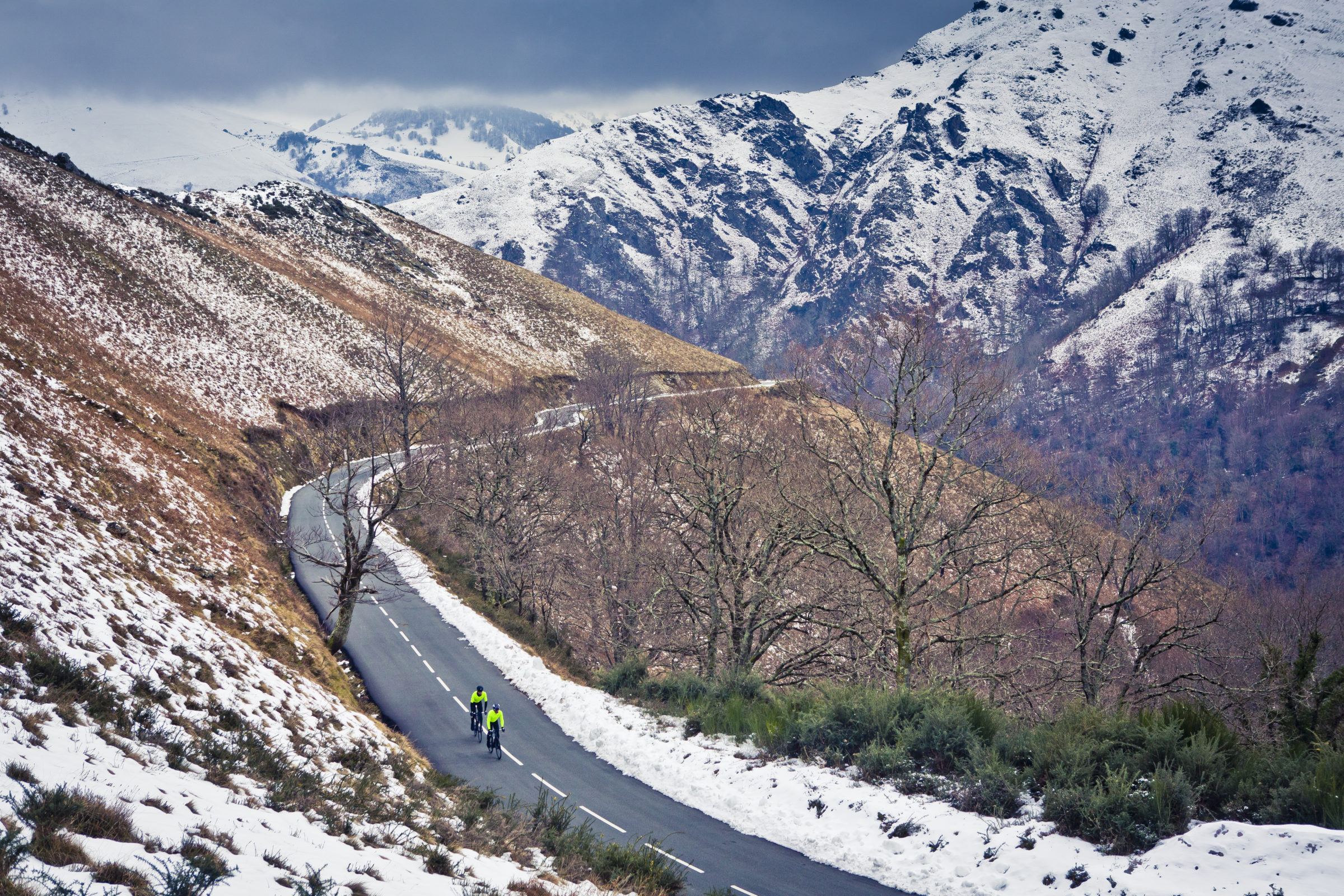 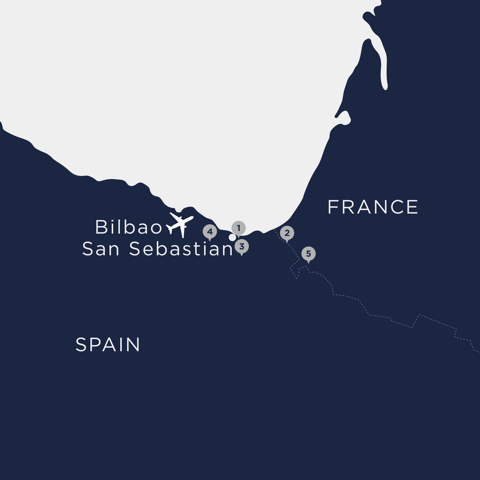 Basque Country has every reason to be a popular cycling destination, but the region is also known for its moody weather conditions. It’s generally warm enough to cycle all year round, but due to its proximity to the Atlantic Ocean, rainfall is frequent. The Basques even have a name for the light, misty rain that can go on for days: txirimiri. The upside: Basque landscape is green and lush and the hills look magnificent with added puffs of low cloud and fog.

A smart cyclist comes prepared and always carries a rain jacket to cope with sudden downpours or persistent drizzle. And remember it gets a quite a bit colder higher up into the mountains. Stay warm, dry and comfortable with these classic styles from Etxeondo: