10 Reasons to head to Berlin for the Fahrradschau!

It’s spring. Well, almost. And whether you’re in Europe or not, many of us are stoked on The Classics kicking off soon. What could be more fun than stuffing your face with frites and screaming at your favorite pros in Flanders? Not much to be honest, except, of course, for the Fahrradschau in Berlin.

The now legendary annual Berlin Bike Show is unlike any other bike show that you know. No other event I’ve attended combines so many of the universal reasons why we all love cycling than the Berlin Bike Show. This is fittingly emphasized by their hashtag, #cyclingunites.
After 2016’s edition I waxed poetic about what makes it so amazing. For starters, it’s part of a whole week of love for cycling called the Berlin Bicycle Week. Here’s my write-up on last year’s BBW. Next week thousands of attendees, hundreds of exhibitors and many athletes of different disciplines travel from across Europe and beyond to attend this year’s edition. Why? Here are my top ten reasons: 1. Rad Race Last Man Standing
March 4th – 19:00 – 23:55 – Berlin Kart, Werbellinstraße 50
Fixed gear racing is nearly mainstream. Hell, Red Hook Crit turns 10 this year! If you’ve only seen track bike racing on the banked walls of a velodrome on TV, then the Rad Race Last (Wo)Man Standing Race will blow you away.
Imagine the crème de la crème of the international of brakeless fixed gear racing circuit competing on a go-kart track surrounded by mob of fervent fans losing their minds. After spending Saturday at the show all day, get stoked to go support your local Red Hook hopeful at the Rad Race starting 7pm. 2. The ‘Fahrradsalon’ art exibitions
From Gianluca Gimini’s Velocipedia project of realistically rendered images based on sketches from randomly selected people who were asked to draw a bicycle from memory, to Jofroi Amaral’s collaboration with builders as Hojmark Cycles. Or artists like Saâdane Afif presenting beautiful bikes that no one will ever actually be able to ride.
There will be lots of art focussed on cycling, cyclists and bikes for you to admire at the Fahrradschau. Be sure to check out Carlos Fernandez Laser work. Carlos is a Hamburg based photographer who loves being on the road, and he’ll present his images from The Japanese Odyssey – When it rains in Japan. This series chronicles his trip with Philipp Lee Heidrich on the Japanese Odyssey, a long distance qualification throughout Japan. They started off the first day with a beautiful sunrise and gorgeous weather… then came two typhoons and the rain began… 3. Women’s Cycling discussions & workshops
Riding a bike means different things to different people and for women the experience is constantly changing as well. From encountering harassment on the street to preparing to compete, the Fahrradschau is bringing women together to share experiences, advice and insights during a number of talks and workshops.
• Discussion: The future is female – 4. March 2017 11:30 – 13:00
• Workshop: Street harassment – 4. & 5. March at 17:00
• Discussion: #womenwhorace – 5. March 2017 11:30 – 13:00

4. Cake ride – She36 x Fahrtwind
March 4th – 11:00 – 13:00 – Yodel (Weserstr.91, Berlin-Neukölln)
I’ve said it before and I’ll say it again: the best thing about bike shows is the rides. No one will dispute the allure of exciting items on display along the aisles of the show but Berlin is an amazing city, asking to be explored by bike. The Cake ride is your chance to go for a guided spin through Berlin. Experience some sweet spots for tasting cake, visit some of the city’s best bike shops and make some new friends. Joining the ride is free but bring some €€€ for cake! 5. Listnride Crossride
March 5th – 10am depart – just outside Fahrradschau venue
The CX Worlds may have just concluded last month in Luxembourg but #crossiscoming to Berlin for the Fahrradschau. Get ready to get rad in the Grunewald with the List-n-Ride crew!

6. The Radsportgruppe Ungemütlich U-Turn Race
Where the Rad Race go-kart madness means elimination on unfamiliar territory, the U-Turn race is meant to simulate daily-traffic-madness. This fixed gear only race requires mastering obstacles as quickly and safe as possible: it may be a traffic light, the obligatory stroller on the cycle lane, pedestrians or side mirrors of cars. I’ll be there seeing how this wild race unfolds for sure!
> Friday, 3.3.17 // 18:00 Warm-Up // 19:00 Quali
> Saturday, 4.3.17 // 10:00 Warm-Up // 11:00 Finals 7. The Ambition Area – Even more ambitious in 2017
The ever expanding exhibitor list is growing even bigger in 2017 with international brands like Shimano, SRAM, Zipp and Lightweight joining to name a few.
Another new face at the show and celebrating their 5th year anniversary is Vulpine, who will exhibit new gear and release plans for Germany this year (a little bird told me they may have some Copper Dog at their booth too :)). 8. HANDMADE Area & Best Campagnolo Build Award
Every year, lug loving eyes and filet-brazed fanatics turn their eyes towards NAHBS (North American Handmade Bicycle Show) and Bespoked. But these handmade frame aficionados may not realize there’s a growing number of independent builders gathering in Berlin each year. A good reason for the organization to expand the HANDMADE Area with the ‘Berlin Frame Builder’s Island’. Twelve local bikesmiths and manufacturers will show the public what the capital city has to offer in terms of frame building.
No matter whether it’s Berlin or Bratislava: Campagnolo honors the international frame building community and the best specimens on display during the BFS with the Best Campagnolo Build Award. 9. The Films – The Berlin Bike Show Bicycle Cinema
The Bicycle Cinema will be screening an awesome collection of independent films related to cycling on Friday, Saturday and Sunday. With top picks like 8bar Adventures – High Atlas Morocco followed by a Q&A with the guys from 8b, or the Length of Sweden (or Sverigetempot), a documentary by Ertzui Film. Check the full program here (you’ll find German info only, but the film titles are enough to know you want to go). 10. The Vibe
I’ve been in the bike biz game for almost 10 years and I’ve rarely encountered events so beloved by industry employees and attendees alike. Everyone is stoked to be there and regardless of what kind of rider you are, you’ll find your tribe at the show. The Fahrradschau spirit and atmosphere truly embraces the bikes and not the bucks. By that I mean: it’s so much less about commercialism and so much more about the timeless wisdom: #cyclingunites.

If, after reading this top ten, you haven’t already booked your trip, be glad that what began in Vienna last year, will continue now in Berlin! Soigneur Cycling Journal is back to award the finest exhibitors at the Berliner Fahrradschau with the #handpickedbysoigneur Recognition of Excellence. Follow @Soigneurs for coverage next week. 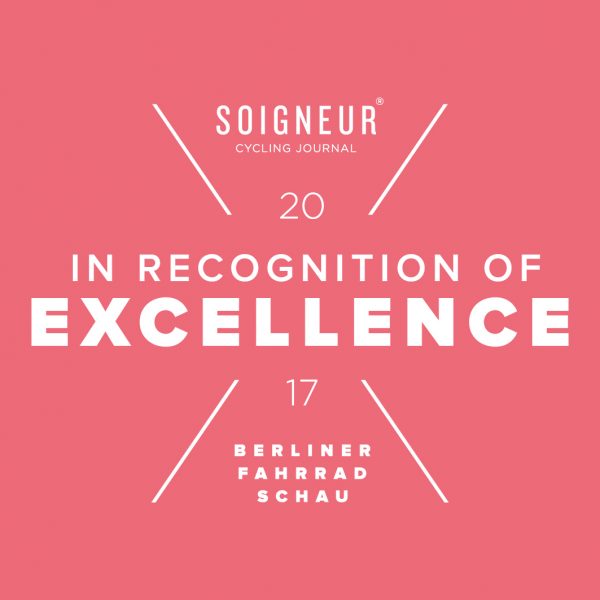 See you in Berlin! Bis bald!

If you arrive early, head over to the Lange Nacht der Bike Shops party at Standert on Wednesday night and get out there on Thursday evening before the show to join the 8bar Night Cross too!