Gravel /’grævəl’/ is a loose aggregation of rock fragments. Gravel is classified by particle size range and is categorized according to the Udden-Wentworth scale gravel into granular gravel (2–4 mm) and pebble gravel (4—64 mm).

Well, there you have it. There is gravel and there is gravel. We, used to riding what are — apparently — granular gravel paths in the Low Lands, sort of assumed that was just what gravel was. So, upon arriving on the idyllic shores of lake Annecy, we reasoned that was exactly what we were in for for the next 3 days. As it turned out, Alpine gravel is definitely on a different level of the Udden-Wentworth scale… 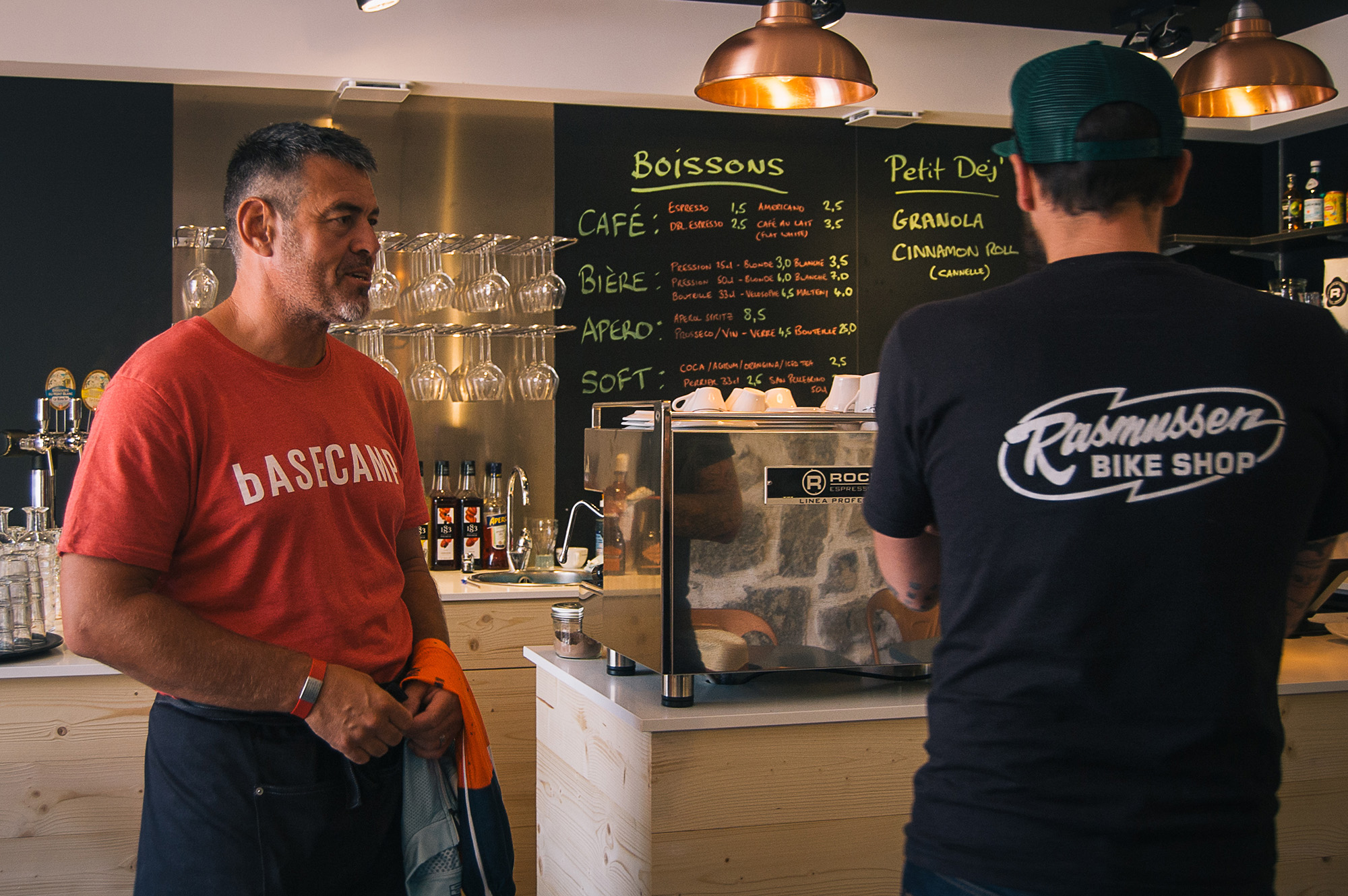 We are in the village of Talloires, France. Tucked away between the archaic dwellings and grand 5-star hotels, one can be surprised to find a spanking new bike shop-cum-café nestling on the edge of the village square. But, with some of the most famous climbs of France only a lovely day’s ride away, it’s not surprising Basecamp set up shop here. We are here, courtesy of 3T, to sample the route of Basecamp’s Tour de la Resistance, a 3-day bikepacking adventure ending with a randonnée along the former battle sites, to celebrate and remember.

The undulating plateau east of the town, near Glières, served as a base for French resistance fighters during World War 2. Under siege by German troops and Vichy-French militias, the resistance here fought on since 1942, supported by parachute drops. Despite heavy casualties, the Chasseurs Alpin did not waver and brought about the liberation of Haute-Savoie on the 19th August 1944, even before Allied forces had arrived. The scattering of memorials and necropôles around the area bear scant witness to their valor and sacrifice, and continue to serve as symbols of hope.

Early next morning finds our company cheerily riding along the lake, the deep lapis color of the water shimmering beneath the morning sun. Furnished with a small fleet of 3T’s new Exploro model, concocted by the mind of former Cervélo main man Gerard Vroomen, our huge tires zoom effortlessly along the bikepaths. As the airline left one of our Exploro’s in shreds, one of us will take on the trip on Open Cycles’ new gravel model. 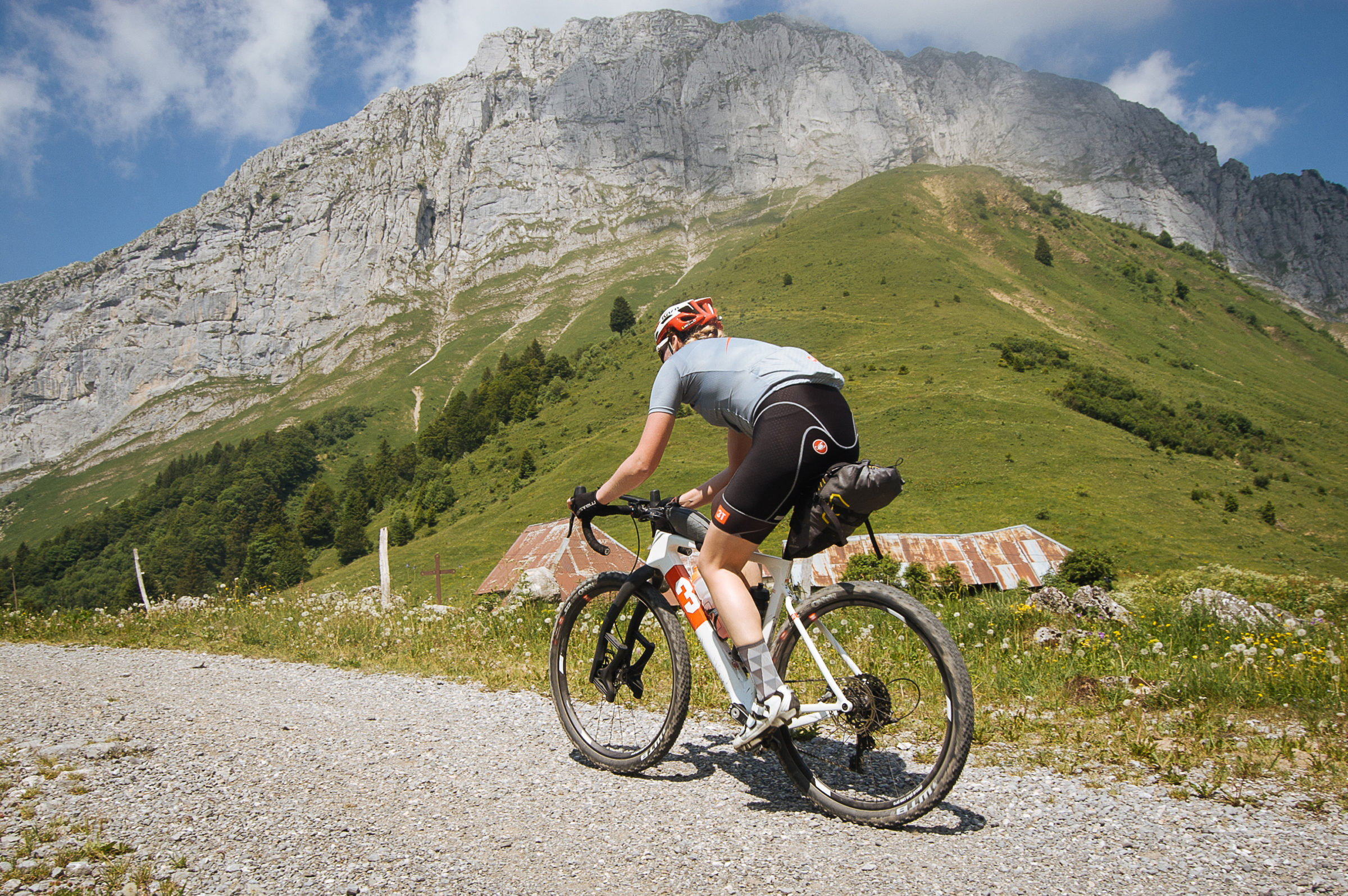 Arriving on the lower slopes of the Col de Chérel, the cool air beneath the canopy of trees is welcome, as temperatures are rising steadily above 30C and it’s not even 10 in the morning yet. Steadily, the tarmac starts breaking up into pebbles and scattered tufts of weeds, and then wholly surrenders itself to the Alpine gravel that the 3T Exploro is made for. Rolling ever onward and upward, while boulders scatter under wheels and spires of rock tower above our heads, we come to terms with the trail and our bikes, occasionally sliding this way and that over the rocky surface. 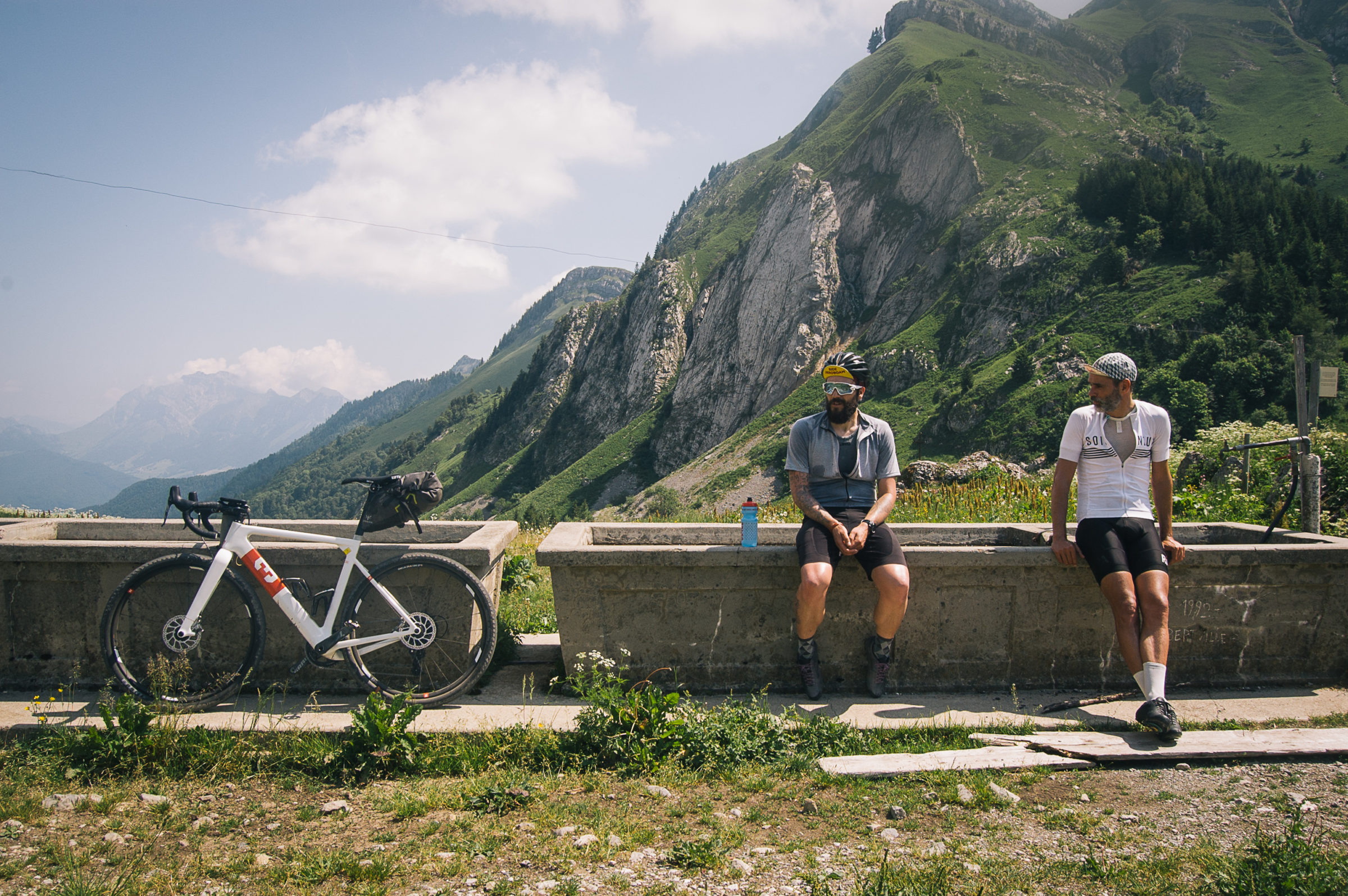 The gradient permitting, we gaze around in awe. This remote sylvan landscape, and the effort it takes to travel it, commands immense respect and wonder. The challenge invokes in us a different outlook, where the distance between rider and natural surroundings dwindles, as if both seem more apt to whisper their secrets to one another. Riding these crooked trails of eroded pebbles brings us closer to ourselves, our companions and our environs.

As remnants of abandoned farms welcome us to the first summit of the trip we spot the first snow-capped crests of famous mountains lurking in the hazy distance. We ride a pastoral landscape back towards civilization, and lunch; an al fresco affair with pies and pasta salads on a parking lot. Packing the leftovers into our bags, we set out to ascend old streambeds, so insanely steep and boulder-strewn as to throw us off our bikes numerous times, cussing and sweating. 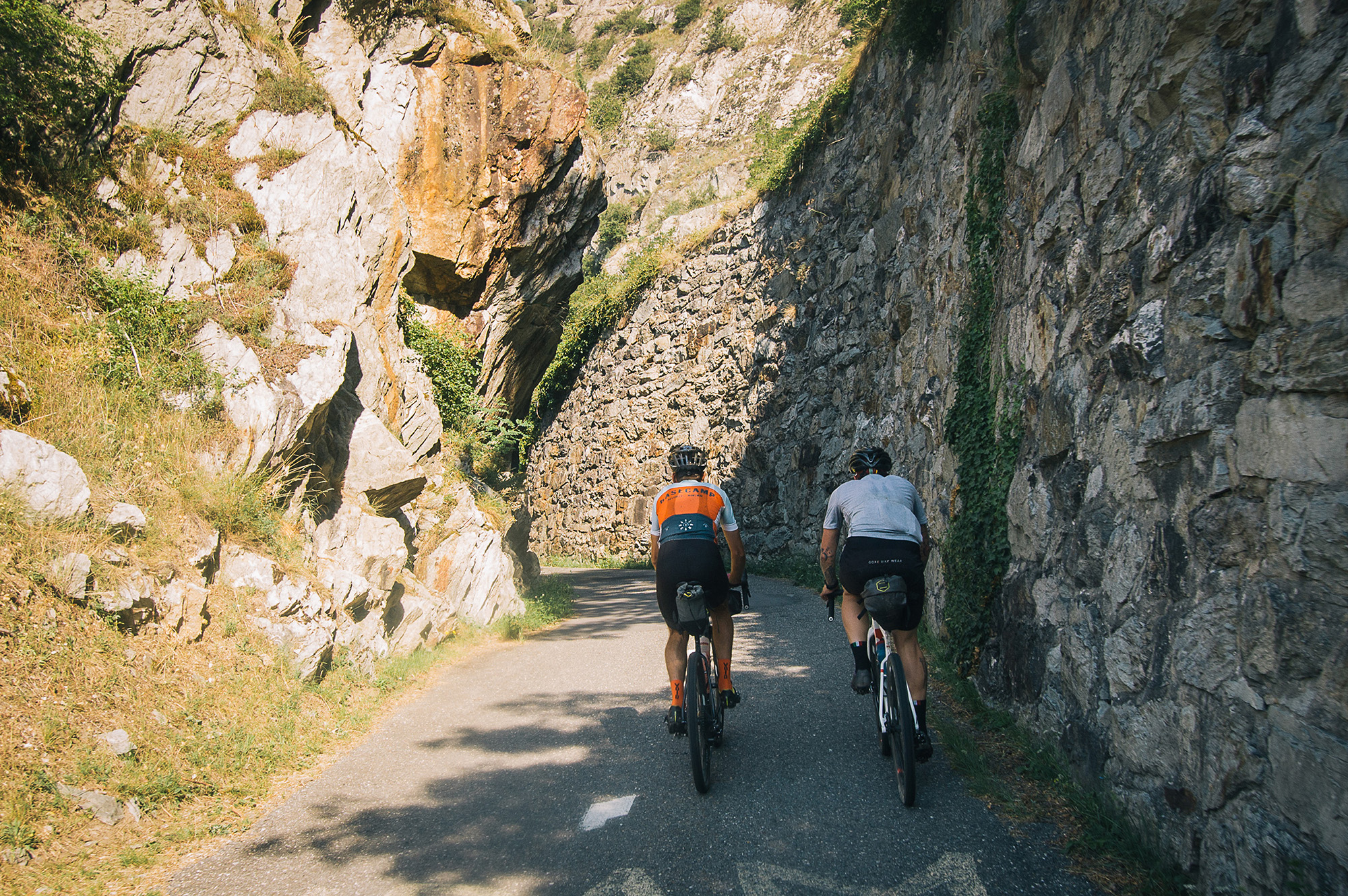 On the sun-scorched slopes of the Col Champlaurent we ride from shadow to shadow, ever seeking the relief of the trees. And while our bodies shiver with heat, our minds solely focus on the one thing all French mountain villages seem to have – a commodity once used for washing, now revered artifact for scalding cyclists; the water trough. 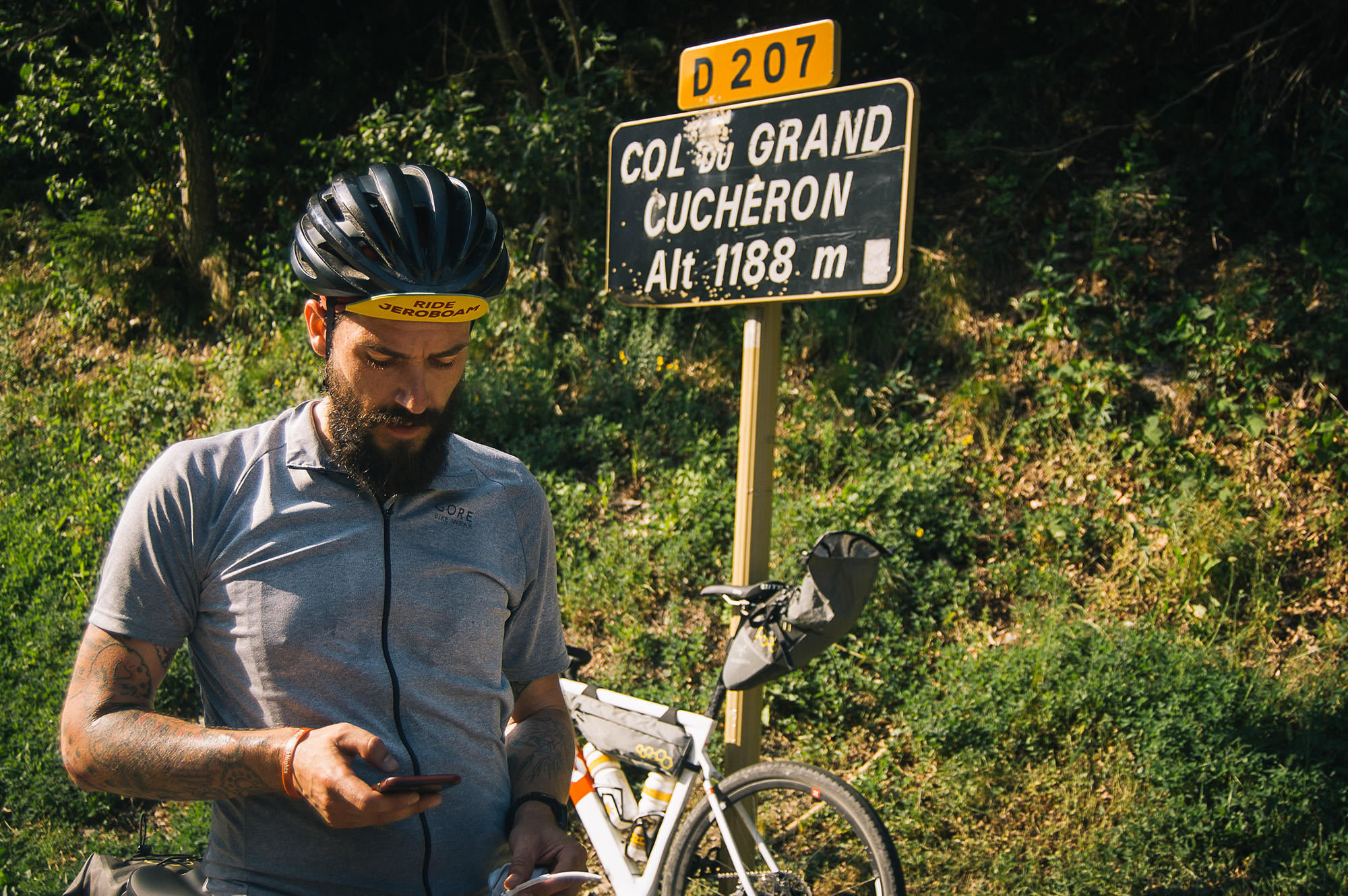 A long descent under a pale sky, streaked with red and copper, brings us into the famous Maurepas valley, from where one can choose any number of infamous summits to crest. This slowly dawns on our tired minds, as we gaze upon mountainsides we would surely have to ascend tomorrow. For now, food and drink. Disregarding the automated pizza-dispenser at our own risk, we make for the local truckers’ hang-out in proper bike-packing style: not having brought shoes to save space means having to scout for supper bare-footed. 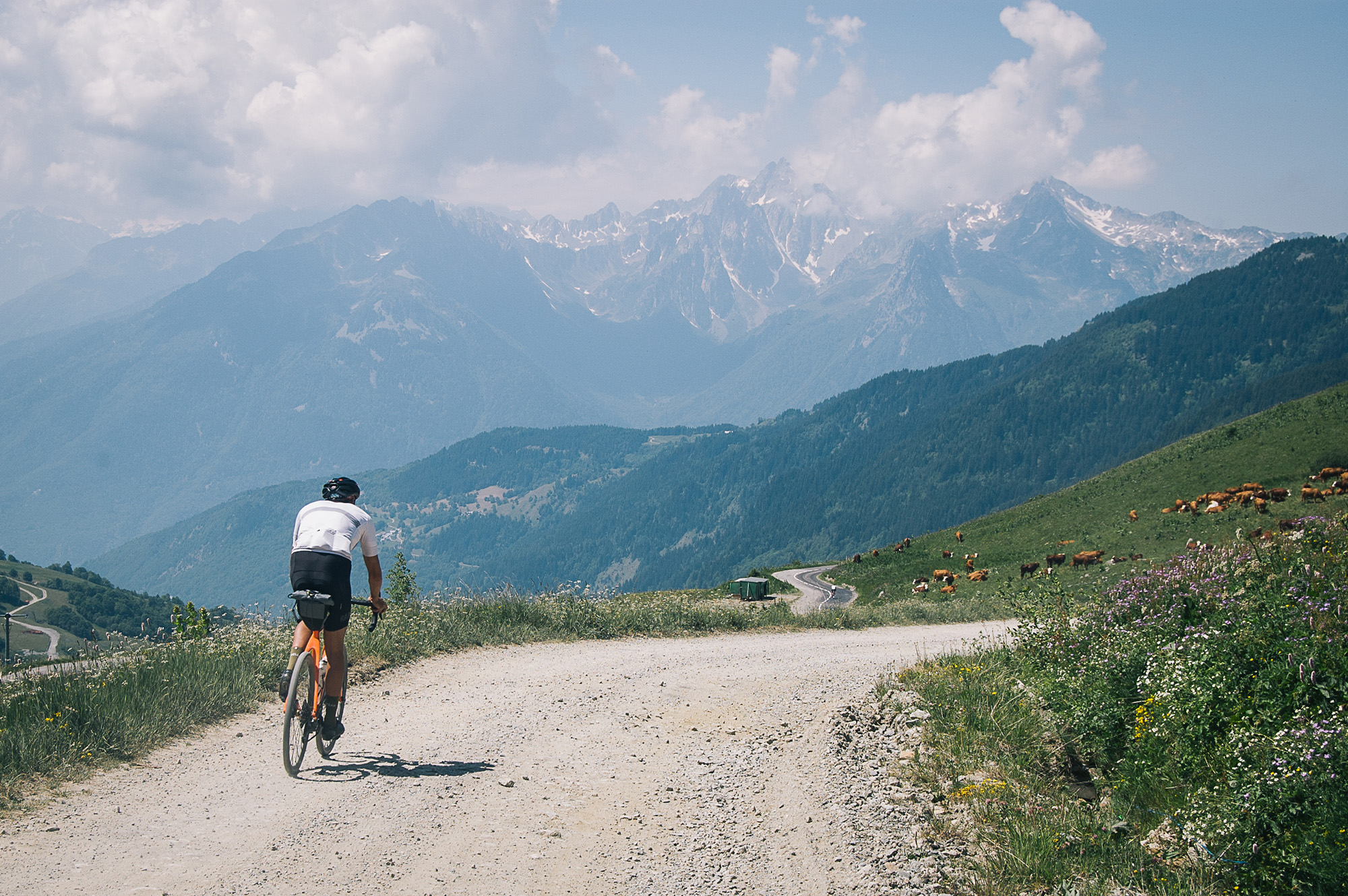 There is something very comforting about carrying all that you need on you, and on your bike. Being prepared for any eventuality, or obstacle in your way. This inspires confidence. Travelling from A to B, instead of going round from A back to A, seems to give a journey even more purpose. And now that we had gotten to B, it was time to head back to A. 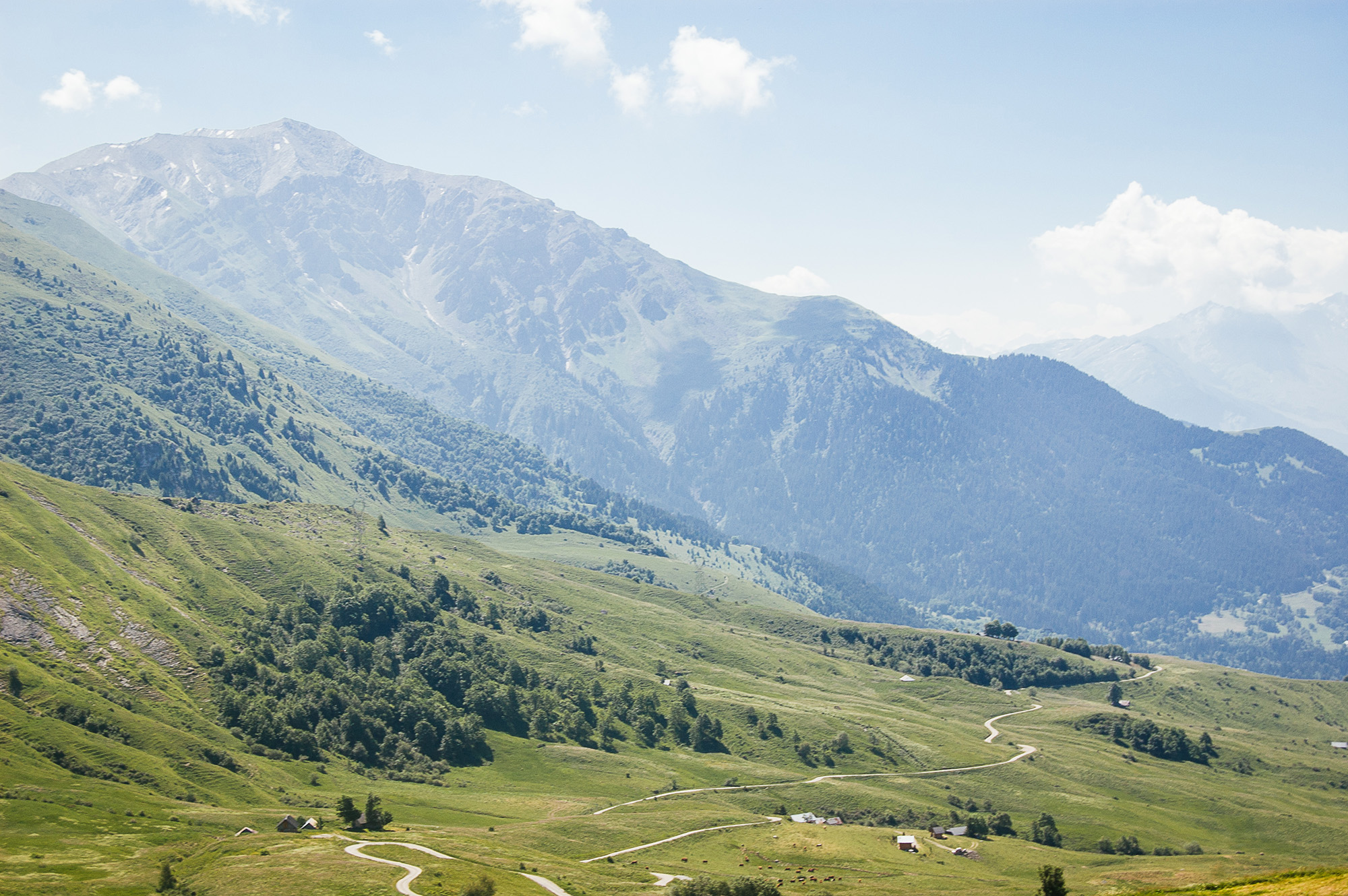 The raison d’être of the Lacets de Montvernier switchbacks baffles the casual passer-by, but one purpose they serve is to get over the ridge into the next valley beyond. The clinging of cattle bells accompanies us to where the route for other people ends, and our route begins. The gravel ascend towards the famous summit of La Madeleine is where no pro has gone before. Petanque-playing locals heed us about the state of the path ahead. No need. We are here to explore. To take those paths less-travelled. To snake our way upwards, bouncing about on Udden-Wentworth’s pebbles. 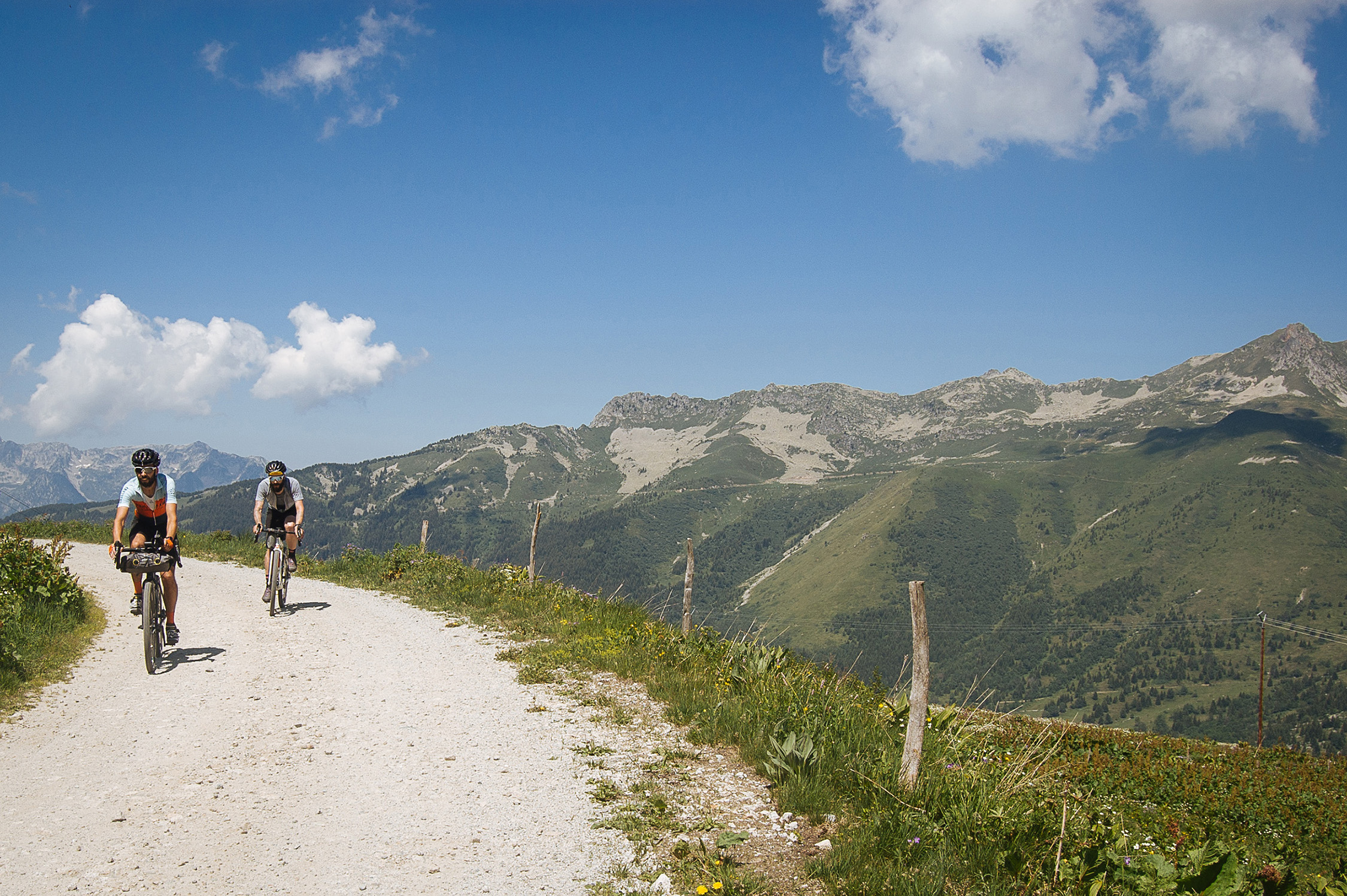 Our final day brings us another plethora of pebble gravel paths and hairpin corners. This is the main course of our tour; the recon of La Resistance proper. A 165 kilometre day with another 3000 meters of climbing as a grand finale to this trip with 3T. Our squad winds its way through a vale wrapped in leafy shadows, following rustling brooks and very choppy cattle trails. The Exploro’s easily carve new paths through swathes of grassland, pastures of cows and ancient streambeds. On the Col de l’Arpettaz gorgeously laid-out switchbacks succeed each other in unbelievably rapid succession, winding along a sylvan landscape, but taking a final toll on my already wrecked knee. The route across the plateau is hard, the jagged trail rising and falling to prevent us getting into a rhythm, the pebbles getting so substantial as for us to form a whole new sense of what gravel means in the Savoie region. But this is why – and what – we are here to ride. 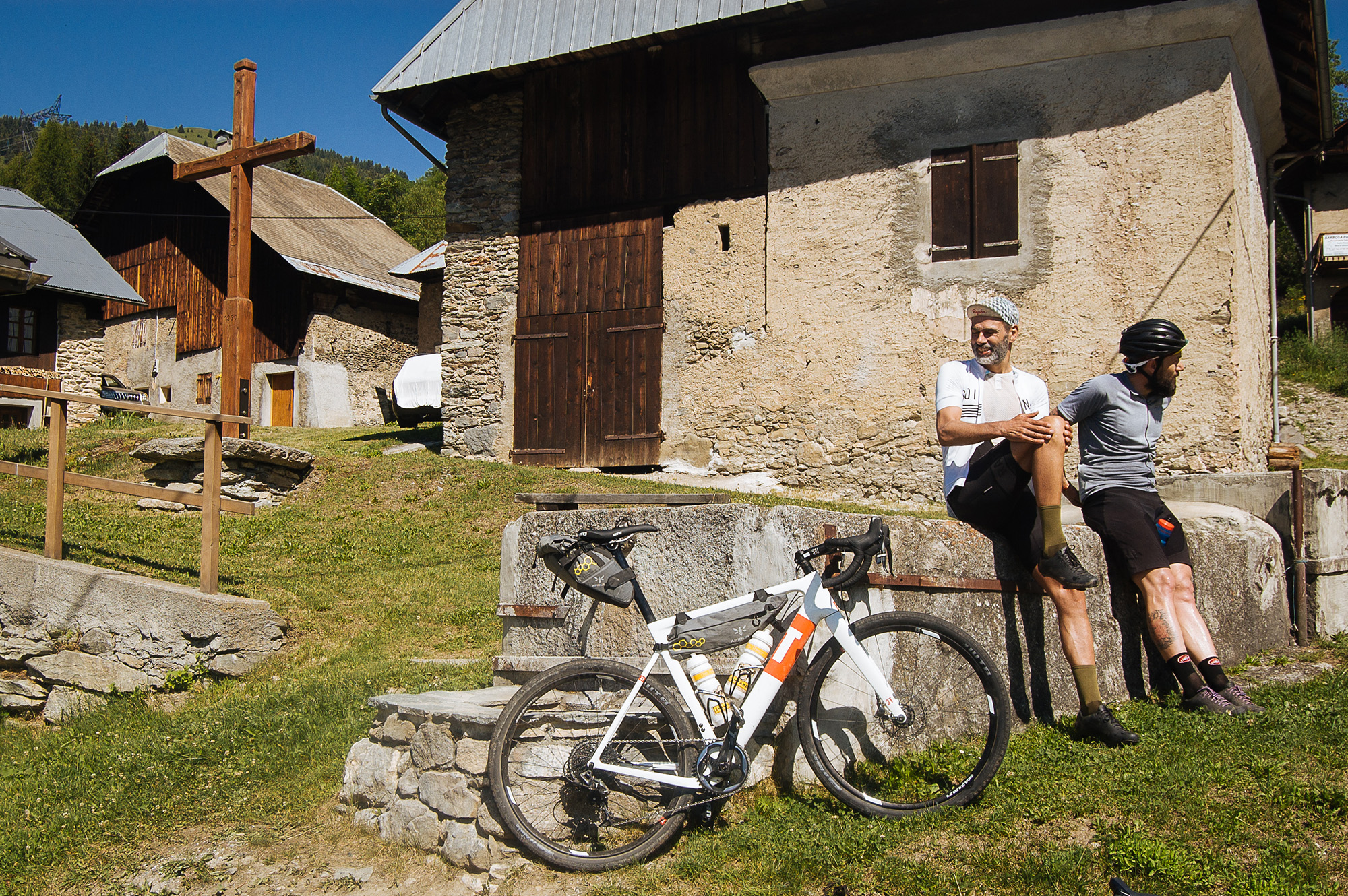 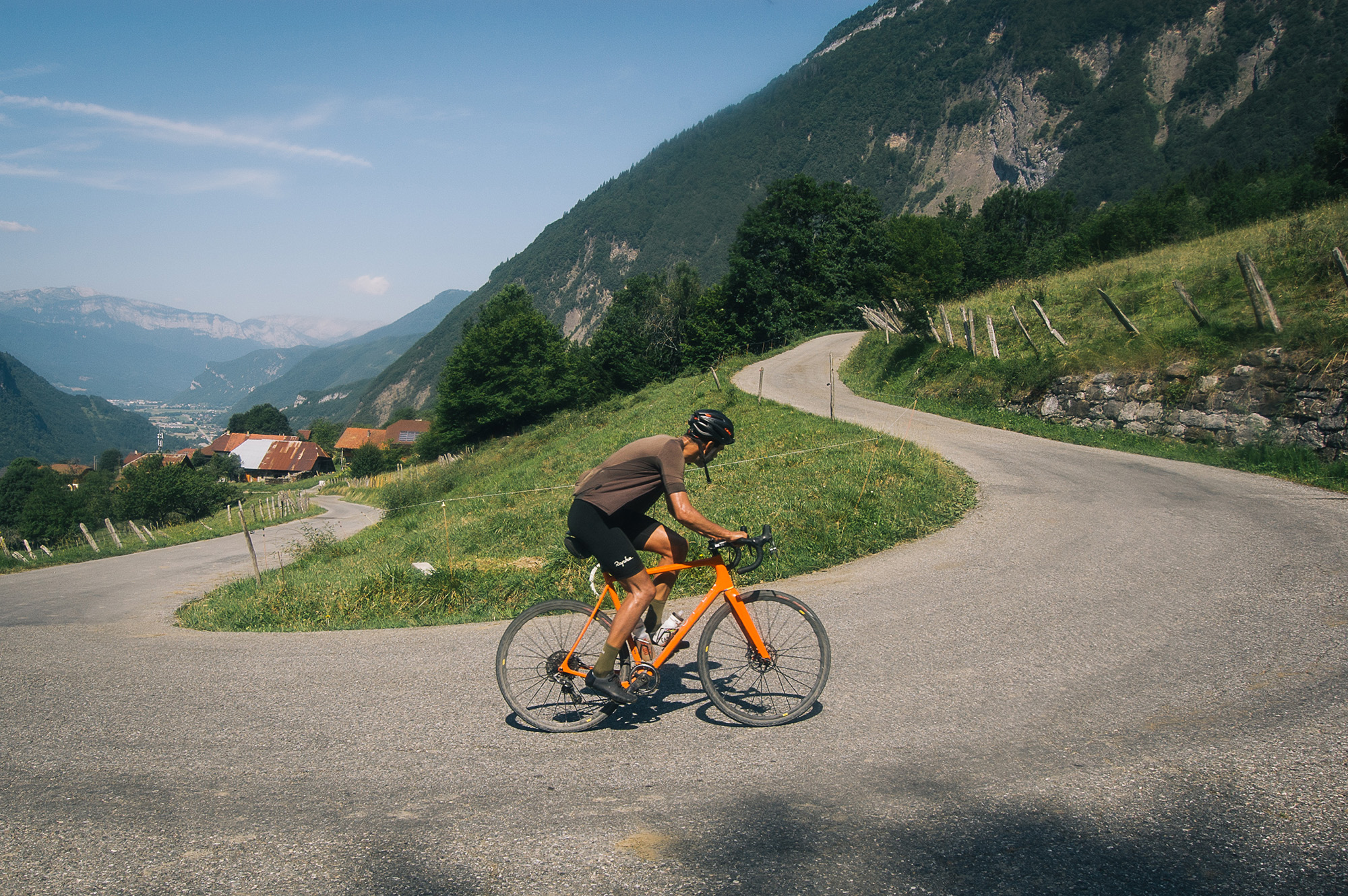 To experience these new hardships. To take in the majesty of the landscape and form fresh perspectives. To bypass the concrete monstrosities that serve winter tourists. To ride in the silence of alpine meadows. To bask in the sun and the alpine breeze without distractions, other than the murmuring of a distant waterfall. To become inspired. To set ourselves new challenges and overcome them.

And, since we are only mortal, to ultimately indulge in a glorious dive into Lake Annecy at arrival. 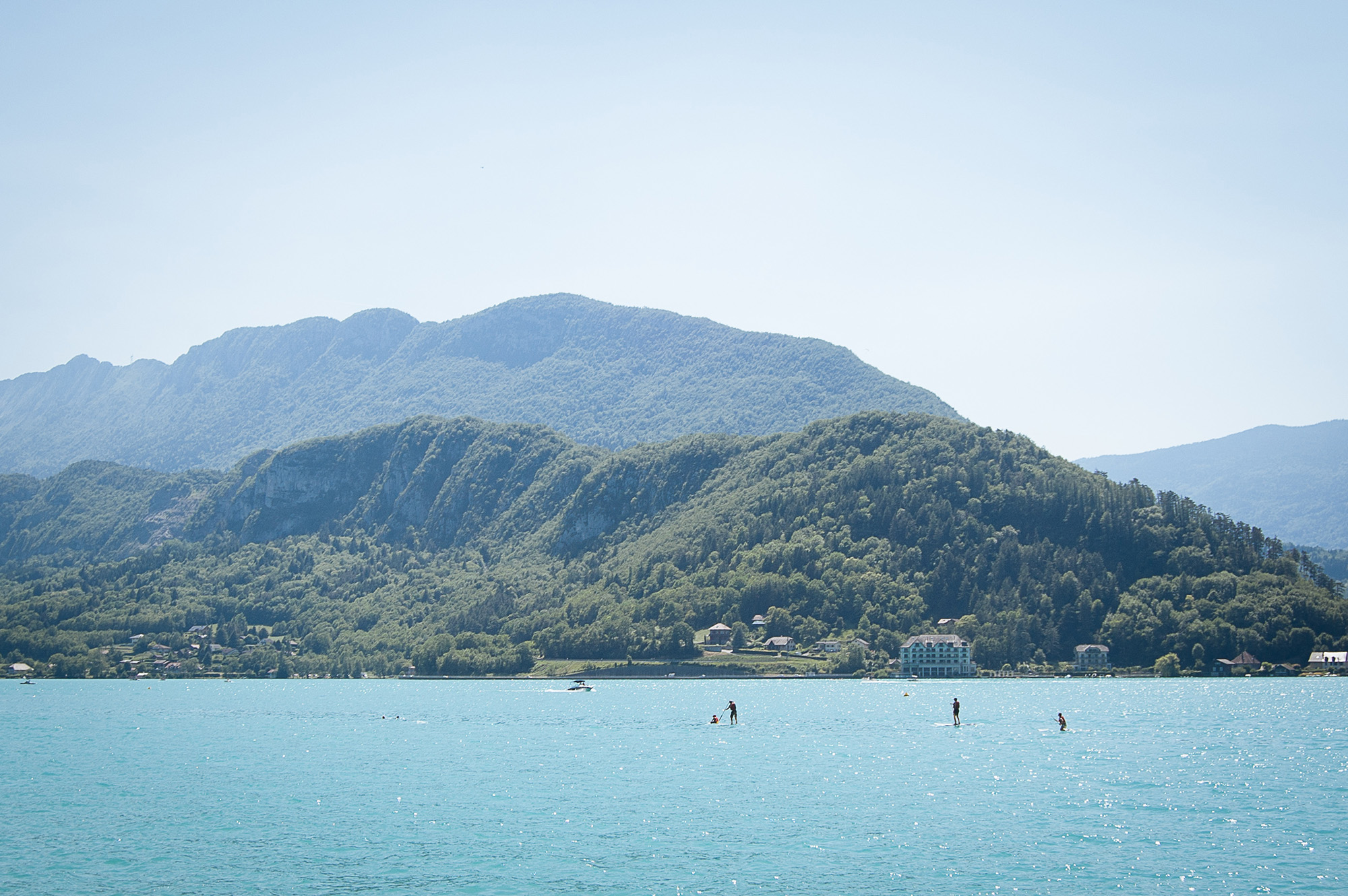 All images by Mirko Meerwaldt 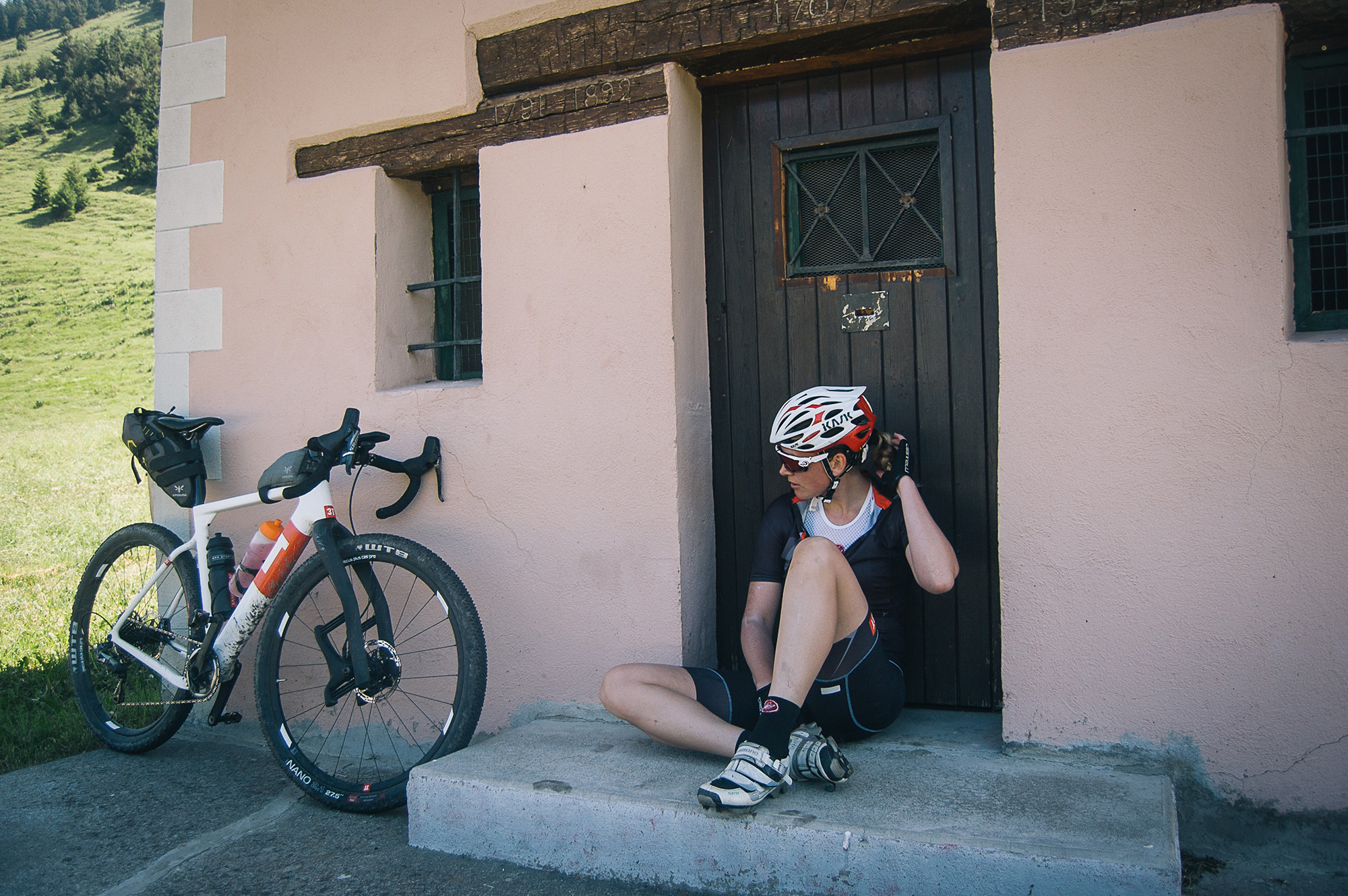